Your EDM Q&A: Dutch DnB Festival Giant Korsakov is Starting a New Label and Here’s Why It’s a Big Deal

As more U.S. drum and bass fans become aware of the massive UK and EU festival scenes and their growth, more names are cropping up every year that stateside heads should know about. From the standards of Let It Roll and the Hospitality series to more obscure let nonetheless massive festivals like Invaderz and Rampage, it seems like there’s more and more to learn with every passing season and more and more reasons to make the trip across the pond.

Korsakov has become one of these new earworms we’re hearing more often stateside. Korsakov’s founders began making techno events as in the Netherlands a few years ago but quickly switched to DnB and never looked back. It grew from there quite quickly, and now on its most recent run over Halloween weekend, Korsakov sold out a 5,000 capacity venue in Rotterdam. Yes, Rotterdam; home of techno and gabber. Not only are Korsakov surviving, they’re thriving and have become one of the biggest drum and bass festivals in the world.

In addition to their landmark festival just last week, Korsakov also did something that very few festivals are trying: they started a label. This is extremely novel for the festival scene in Europe, where pretty much no festie promoters are anything more than loosely associated with labels, save for Hospitality. The new Korsakov label released an introductory compilation just ahead of the end of October show, and with tracks by Maztek, Jade, The Clamps, Feint and Gridlok, it’s a great reflection of the festival: diverse, danceable and hard-hitting, and it’s a definite preview of things to come.

With Korsakov’s buzz on the rise and the new Korsakov Compilations Vol. 1 out and doing well, Your EDM decided to sit down and chat with the promotion company-turned-label’s newly knighted A&R person, Elmar van Eijk about how the project got started and what kind of madness we can expect from one of the craziest festivals in drum and bass. Spoiler: lots of tracks from lots of big names are incoming from Korsakov, so read on.

For US DnB fans who may not know much about Korsakov, explain a little about what you do now with events in the Netherlands and what the original mission was?

Sacha and Sami, my two great friends and colleagues at Korsakov who look after the events, were doing techno events actually before they started Korsakov under the name Kraak. After Sacha and Sami went to a DnB event together, which was Sami’s first one, they decided that they should throw a DnB event. I think they never had the intent of becoming the biggest or the best drum and bass event out there but they just wanted to throw a proper DnB event, which they thought was missing in our home city Rotterdam. Three years down the road, we’ve grown to be one of the biggest DnB events in the world with our upcoming event pulling more than 5000+ visitors from over 20 countries. We repositioned ourselves from a small underground event to a big event where we present all subgenres of DnB with a nice and different theme every event.

What made you decide to expand Korsakov into a label?

Starting the label is something we wanted to do as soon as Sacha and Sami started putting on many different subgenres on the events. We really think music shouldn’t be labelled to or focused on just one subgenre since there’s so much variety that DnB has to offer. The only thing that stopped us was that we didn’t have a big enough fanbase yet and we also lacked financial resources in the early days. With the next event now coming up and selling out 5000 tickets, we have all the resources needed and we thought it was finally time to put our money where our mouth is and start the label. We think it’s safe to say our first release really backs up our words and ambitions!

The new compilation has a lot of artists on it; how many of these will be putting out solo releases with Korsakov?

Let me see, there are quite a few on there indeed! Out of the 16 producers on the album, exactly half are doing solo releases with us at some point in the near future, of which two are going to sign exclusively for multiple years. Korsakov Music is here to stay let me tell you!

How is the new label going to interact with the events side of things?

The label will be self sustainable within a few years. That’s the plan at least. We don’t necessarily book artists because they release on our label, but this can be an artist request that we will sometimes grant, and sometimes not. We are also planning Korsakov Music release parties to be held all over Europe. 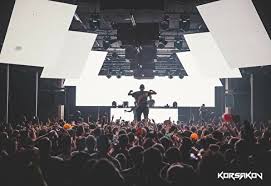 Are there specific subgenres of DnB you plan to focus on with the label?

No. We like everything and want to be a unifying force between all subgenres. If the productions are next level or have the potential to be next level we will always want to sign it.

Are you planning to include other genres of bass music in Korsakov label releases?

The simple answer is no. Perhaps we’ll invite some non DnB artists for a remix here and there or an artist puts out an album with one or two tunes on different tempos but it will always be a DnB brand. I might at some point in the distant future want to do my own dubstep label but I have zero concrete plans for it and I’m perfectly fine as is.

How do you plan to go about selecting and working with artists on releases? What will your A&R look like?

The way I did ‘The Korsakov Compilations Vol. 1’ was literally hitting everybody up on Facebook. I knew most of them from my journalism days or from various backstages where I either had to DJ myself or, at Korsakov, be the artist handler. I think not much will change but I will start hitting up artists through management now, too. Because we do one of the biggest DnB events in the world there surely is some extra pull that most labels simply won’t have. I’ll never be like, “yo if you do a tune we’ll book you,” but as I said before it’s usually the artist or manager asking. We’ve got considerable funds reserved for promoting our music so even though as a label we’re new, we aren’t any less capable than most established labels. You should see the artists I’ve already contracted for the next compilation!

Can you give any hints to upcoming releases on the new label?

I can’t name anybody yet but one of the biggest artists on ‘The Korsakov Compilations Vol. 1’ is signing with us for the next few years and dropping his first ever album with us. I also have a few amazing talents doing singles and EPs and another artist from the compilation is also signing exclusively for multiple years. I’m already planning multiple remix EPs too. Korsakov Music is gonna be making steps this year. 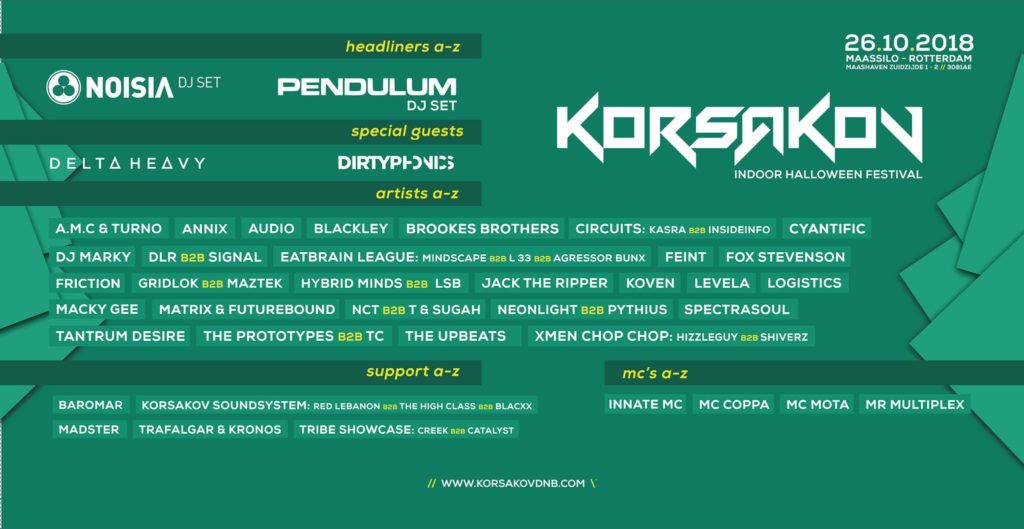 What are the next few upcoming shows?

The next one should be early May and traditionally we do our biggest one every Halloween weekend in October. Apart from that I’m working on album and EP release parties and we’re looking into an EU tour of DnB events. We’re an ambitious lot, us!

And ideas to work with US promoters in the future?

Who knows! We don’t want to exclude anything. We might even do a rave in a cave in Islamabad or Addis Abeba or some shit sometime! The sky is the only limit we have (until we do an event on a plane which with our Dutch disposition for being completely crazy wouldn’t even be the strangest idea). I wouldn’t count on it but you never know, and we’re always open for hosting stages too. We’ll be waiting for EDC and Ultra to invite us over!

The Korsakov Compilations Vol. 1′ is out now and available to stream on Soundcloud and Spotify and can be purchased on Beatport. Stay tuned for more release announcements soon.