Win Tickets to Both Nights of Space Jesus on NYE in Chicago!

by Georgia Modi
in EDM News

Thanksgiving is over, we’re all still stuffed from the endless amounts of we consumed… but it’s time to shake that off and star thinking about what’s to come! NYE is right around the corner and as usual Chicago is truly shaping up to have a abundance of offerings.

One in event in particular caught our eyes, of course, and that is Space Jesus’ two night run on Sunday, December 30th and Monday, December 31st! On Sunday, Space Jesus will be performing a special and intimate downtempo b2b set with Yheti at Bottom Lounge. Support will include Huxley Anne and Honeybee. On Monday night, you’ll be treated to a little something different: Space Jesus and Yheti will each be performing their own sets while also having Esseks, Huxley Anne b2b Honeybee, and THA MAGISTRATE as support at Concord Music Hall.

For this run we have decided to team up with Silver Wrapper to offer one lucky winner a chance to win a pair (2) of tickets to BOTH nights of this NYE run. The contest will run from now until the end of December, so plenty of time to get your entries in. Plus, entering is simple! Just follow the contest widget below and use each action to gain entries. The winner will be chosen on December 28th via email so be sure to keep an eye out! Keep in mind though, both shows are 18+ so you must be of age by the time of the show.

Tickets are still available in case you don’t want to risk missing out on either night, you can snag tickets on Ticketfly here. 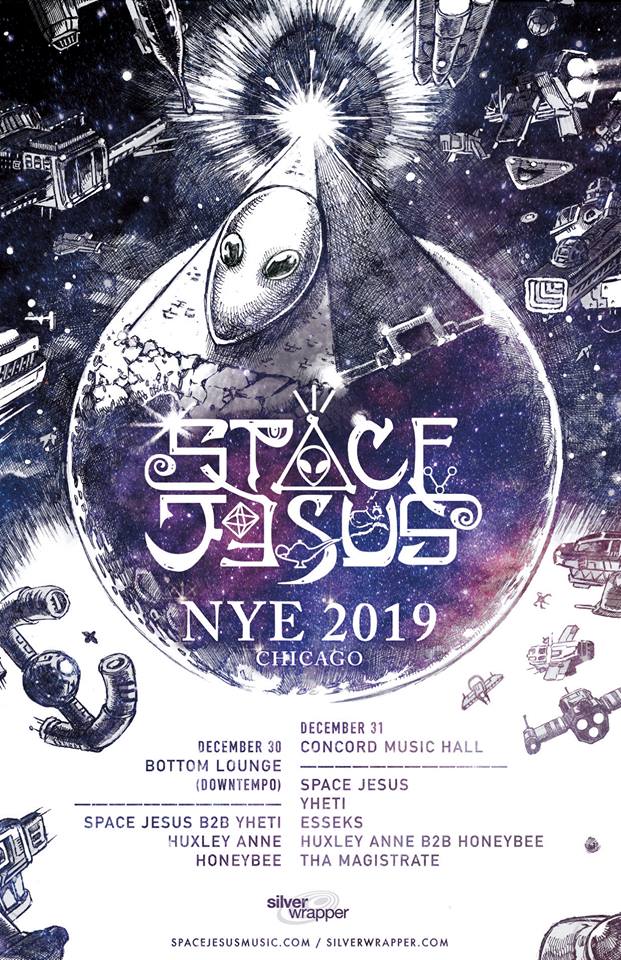