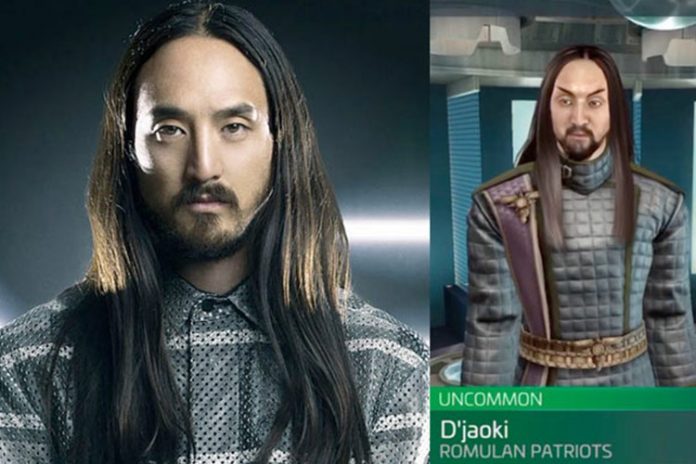 Steve Aoki is not only a superstar DJ/producer… he’s a Romulan Officer in Star Trek Fleet Command.

Anyone familiar with Aoki’s brand knows he has the ability to seize whatever opportunity is in front of him. This time, he’s daring to boldly go where no man has gone before. The new Star Trek Fleet Command game for iOS is a dangerous universe — and Steve Aoki is taking over.

Players must summon skills in “strategy, combat, diplomacy, and leadership” in effort to “forge alliances, defeat enemies, and build an epic fleet to secure, or dominate, the galaxy.” As for Aoki, you can catch him throwing down inside the game at the main stage.

Following Marshmello‘s wildly popular Fortnite concert, anything is possible in these virtual worlds. His performance brought in 10 million players and his extended set just hit #1 on Billboard‘s Dance/Electronic Albums Chart.

Back to the new Star Trek game — learn more and play as Steve Aoki here.

Guess who's coming to @StarTrekFleet Command as a Romulan Officer? 😯@SteveAoki…that's who!

He's daring to boldly go where no man has gone before 🖖https://t.co/xtLaLJeOqX pic.twitter.com/DyDfifXnLL

This is a dream!! I’m a character in the @startrek @startrekfleetcommand game. Play me and battle foooools!! pic.twitter.com/Vuh8v5gxOO