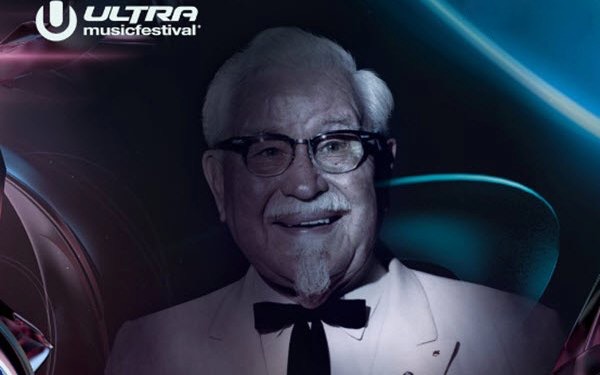 KFC played a set at Ultra Music Festival yesterday and DJs are sounding off about it.

Days ago, KFC took to Twitter to announce that DJ Colonel Sanders would take the stage — not just any stage mind you, but the Main Stage — at Ultra Miami. Here’s what the brand wrote:

One thing a lot of people don’t know about me is that I have been a huge fan of electronic music for the last few days, and I can’t wait to show off the DJ skills I’ve developed in that time. SEE ME LIVE AT ULTRA on 3/29!

From the beginning, this entire stunt has been pretty cheesy. Even yesterday’s headliner, Marshmello called KFC’s set “lame.” The main argument against DJ Colonel Sanders amongst popular DJs is the fact that there are plenty up-and-coming artists deserving of the spot. And, they’re absolutely right.

Various DJs describe the “Ultra Fast Food Festival” stunt as a “rip on rave culture,” “Disneyland corporate level shit,” and just flat out “tacky.” Extra crispy or not — for many in the industry, this is hard to stomach.

So, Colonel Sanders set at Ultra Music Festival was… interesting 🤔

Sorry bro we did the edm chicken thing before you

This @kfc colonel sanders Djing at @ultra is lame. I can think of a lot of other artists that actually deserve to be on that stage instead.

this made me feel so awkward watching :/// wtf is this cringe. Ur right. There are some of the most amazing up and coming artists who should be seen and who deserve to be seen. Yuk.

Nah. It’s tacky. They could have found a better way that doesn’t cheapen what we do

If you think the KFC thing is any different than the way most everything works in the music industry now.. well I’ve got news for you….

Curious as to what people think about this… any thoughts anyone might want to share here? pic.twitter.com/8faj4diE1i

Pump the breaks bruh. We got the Chicken and EDM thing on lock.

this method has been tested & works already. sending colonel sanders was too ballsy.

Just because people are talking about your product doesn't make it any better! KFC still selling your ass a three day old fried thigh.

The biggest thing I’ve heard about WMC is KFC lifestyle branding stunt, fascinates me where the line is drawn for people’s outrage. It’s inconsistent. But when it comes to music I’ve found… most people aren’t as smart as you’d hope -but they also aren’t as stupid as you think

This KFC ultra thing is so weird but low-key proves that if you have money and a mask, you too can be a superstar DJ 🤣

i heard a Crispy Chicken Wing produced it. sent it to Mashed Potatoes for mastering though

I’ve been predicting an actual DJ like this that does full sets and has a personality being accepted as a festival headliner for awhile now. I don’t mean a corporate sponsor thing like KFC, I mean a digital character instead of a dj. Like the next evolution of masked/helmet DJs

So if you were wondering what that @KFC set on the @Ultra main stage was all about, watch here: https://t.co/7MZANb17Is pic.twitter.com/f5C2V2YpVi