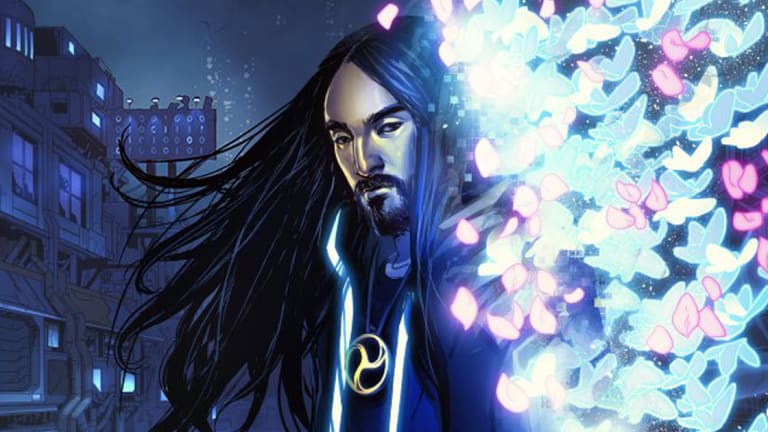 Steve Aoki is one of the hardest working visionaries in the entertainment industry. With a never-ending queue of projects and endorsements, he’s always onto the next big thing. This time, it’s a newly launched comic book he’s promoting.

The new series, “Neon Future,” named after his series of albums, imagines a future where humans live in harmony with technology. Rather than the dystopian setting many science fiction stories focus on, Aoki sees the future much differently. In collaboration with award-winning writer Jim Krueger, with art by Neil Edwards and Jheremy Raapack, he tells his story.

A general plot is that technology is destroying humanity. The robots are going to make us their slaves, or the human species is going to be exterminated by technology. But in this case, we are going to become augmented. … We use technology for the good. It’s a different kind of story.

“Neon Future” takes place approximately 30 years from now in the US. The country has outlawed advanced technology and a long-haired, bearded Asian-American man named Kita Sovee leads the resistance — that “just so happens” to be an anagram of Steve Aoki’s name. The DJ/producer/entrepreneur admits he strives to be like the main character in his comic book.

I believe that technology will merge with us. I believe that at the end of the day, we will all become the robots. We will become cyborg beings where we can have superhuman qualities with the technology.

“Neon Future” is available now through Comixology and Impact Theory. The six issues will eventually be released as a graphic novel, according to a report.

Get your copy here.