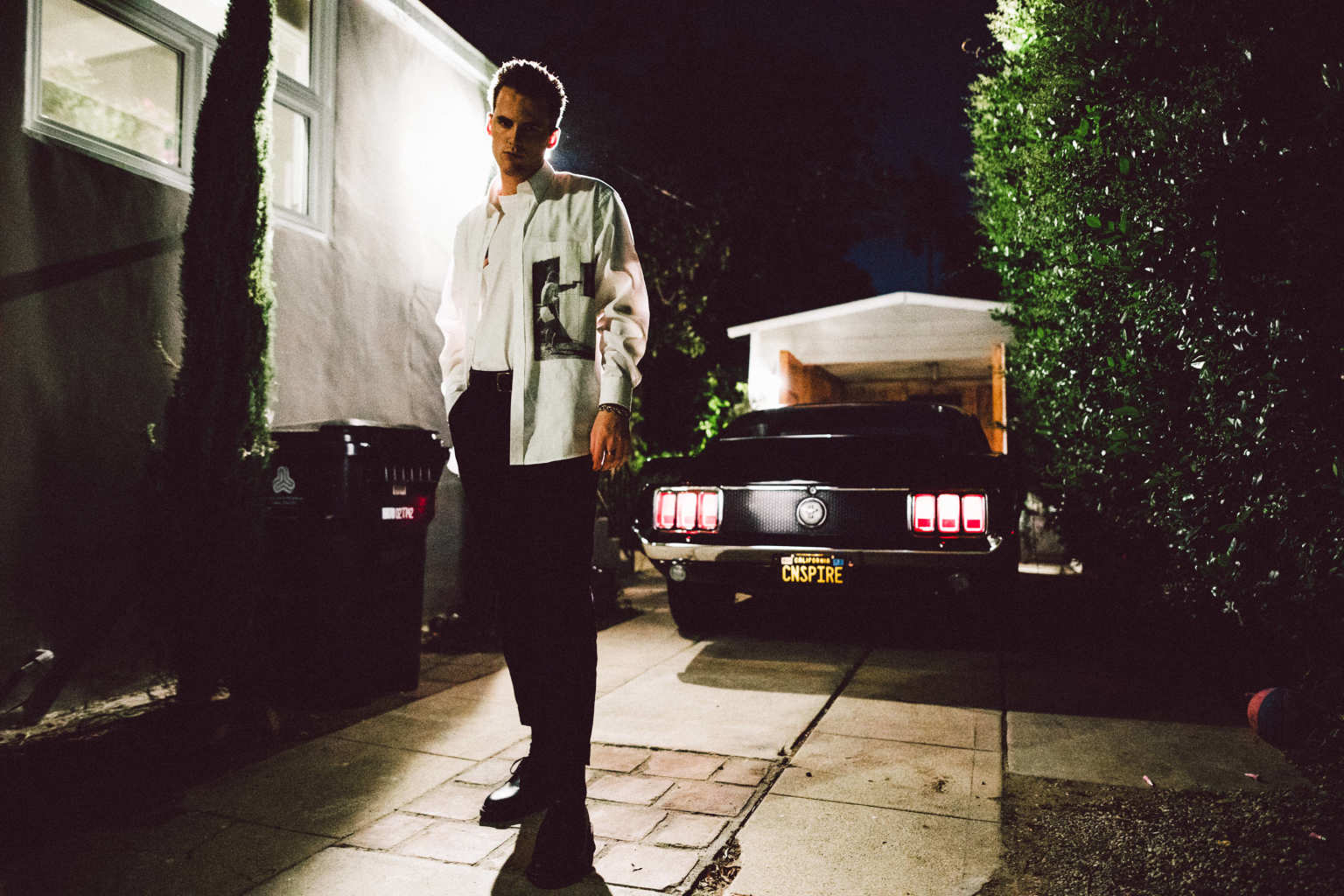 Devault teased us not that long ago that his latest EP was on the way with the titular track “Sapphire” with an accompanied music video. The EP drops today and is a follow-up to his JADE EP that was also paired with a visual experience. Both projects are part of a series of EPs that plan on expanding the Orange County native catalogue into dark club aesthetics.

But what makes Devault (real name Sage Devault) stand out among his peers is that he has his sights set on getting his audience to comprehend what his music and sets are like by making his visual aesthetics readily available when you search for sound. Whether it be via YouTube or Spotify, Devault’s audio and video projects are intertwined and inseparable. Like we once said, artists are taking their musical endeavors further and further and creating whole visual experiences to accompany their works. In this case, Devault is spending his resources to establish exactly what he is even though he is still a relatively new face in the industry.

From working with artists like Njomza, Team EZY, Ayelle, and ARMNHMR to officially remixing Rihanna, RL Grime, Charli XCX, and 6LACK, Devault has been on a grind that is admirable by this industry’s standards. Before the release of his latest EP, we sat down with Devault to talk about his Sapphire EP, his upcoming releases and advice on how to succeed in finding a sound that embodies you.

Check out the new EP and our interview with Devault below:

What have you been up to this past week?

Good, man. I just finished a show this with Brownies & Lemonade in L.A. this Saturday and it went really well. I debuted a new set, a new kind of visual experience, so it was really fun.

With the new changes to your live performances, how would you gauge the reception you received from the audience?

The fans there are just so awesome. They have so much energy and they’re down for anything. It always makes it a fun time.

That’s excellent. Especially when we see where you are now from when you started. Looking back before you pursued music, you said that was what you wanted to do when you were eighteen or nineteen years old. What was the moment or the spark that lead to this decision?

I think it kind of came together in my freshman year of college. I was doing music on the side and I was starting to get into production. Also, my older brother put me on electronic music at an early age so I always sort of had a love for it.

I probably started to apply myself right before starting college as a side thing. And, I remember coming home after my freshman year and having this wave of inspiration. It was kind of like an inner calling to really apply myself. I was also made the decision without really thinking about it much. I just remember telling my parents that I wanted to for it and try music production now.

But I think that I made a blind decision that kind of payed off. It allowed me to sort of have the blinders on and really go for it. But after that decision, I think I went from being a music lover that was getting to know music production to then becoming a musician to then putting together a vision and a story that I want to tell.

During these earliest days, what digital audio workstations where you working with?

I remember that I used FL Studio for about two to three months. But after talking to a few producers from the very beginning stages, I quickly switched to Ableton and I’ve worked on it ever since. I know that everyone has their preferences between programs. I just find Ableton to be such a cool spot to resample or take sounds and to get as creative as possible with it.

But, I won’t lie. Ableton is an interface that looks intimidating. Whereas, FL Studio looks like a program that is easier to get your hands on in the beginning. But, it’s like learning a new language. After months of tinkering it and learning you pick it up pretty quickly.

Do you find yourself being more critical of your earlier projects since you’ve learned more of what you want with your latest releases?

Yeah. I’ll be honest, the records that I made in 2016 and 2017 are really hard for me to listen back to. But sometimes it’s important to still put out those records to understand what your sound is, you know? I think that at the time, I was just making music that I thought was cool. It wasn’t necessarily something that was wholly defining me. It was just me as a musician going through trials and tribulations, finding out what works and what doesn’t. But, I still think it’s apart of the process until I find a sound and space that a feel really good in.

Any of the songs from that era for you stand out despite the time?

I would say it would have to be my remix for Rihanna’s “Sex With Me”. It was my first official remix opportunity. I would say that it’s something that I’m super proud of. If you listen to it, that’s the framework for what the “Devault sound” is. It’s dark, it has club energy, but you can listen to it while driving or with friends. That remix, it did so well that it helped to put the idea in my head that this is a style that I can really run with to kind of go down that road. I think I was unsure about my final sound with the releases before that Rihanna remix. It really help me push forward and have a sound.

And that framework from you Rihanna remix have made you an artist of multiple genres and styles. What would you say is a genre label or labels that best define what your sound is?

I sometimes battle with labeling what I think my sound fits in with. I don’t know. Over the past year my sound has been becoming specific. I think that electronica is fine because it’s more melodic influenced dance/electronic records. I think that that’s what my music taps into but with a darker emotion. I take a lot of inspiration UK electronica. But that’s what I would say as a description of my music.

With your latest Jade EP and Sapphire EP, you’ve accompanied each of these tracks with videos that blend elements of science fiction, neo-noir, and suspense. What made you think that these visual aesthetics would pair well with your sound?

It takes a lot of inspiration from the 1980s, specifically from old new-wave bands and music videos from Depeche Mode and New Order. You can definitely see where the inspiration comes from. I think that with the whole approach with Jade and Sapphire, I wanted the visuals to be a huge focus almost like the music is scoring the short film or music video I did for “Sapphire”. The music could be a compliment to the visual story that I put together with both EPs. I think that’s what made the visuals pop out more. I felt that rather than the video complimenting the song and giving the song more of a story, that the music was used to compliment the video and help its impact.

What was your artistic intention in following this style with these newer EPs versus what you were making with your Stay EP?

I wanted each EP to be four instrumental records that would be my take on what “Devault-Club Music” would sound like. I noticed while I was touring after I put out my Stay EP that there was this void in my sets. I realized that I needed a bit more energy. I thought that I might as well make records that create that energy, that were a little darker, and can translate better with a live set. So Sapphire is like a volume two of Jade with more Night Drive and very synthwave. I definitely have taken a lot inspiration from the “French touch” and you can hear that on Sapphire.

I’m also working on “Ruby” which is like a last installment of these three tapes. Ruby is going to be a bit more vocal-based while still taking that hard-hitting approach. It can bring everything together. That way when you come to a Devault show, you can have a full experience. That’s been the goal with Jade, Sapphire, Stay, and my remixes. I want people to come to a Devault show and go through a rollercoaster and understand that I am not one-dimensional.

Will you be switching between the styles of the Stay EP versus the Jade, Sapphire, and upcoming Ruby EPs? Or do you think that you’ll be blending these ideas?

I think this year has been really cool for me to appeal back with the dance community. Going into 2020, I want to go back to more vocal singles for the rest of the year. But now it’s like where do I find that happy medium? How do I bring the elements in Stay with the energy from the tapes to create the same essence as the dance records that I fell in love with.

It’s been a learning experience for me. I thought, in the beginning, that a super strong vocal should not have to overpower an instrumental or that an overpowering instrumental should not have too much of a strong vocal. But now I’m starting to understand when you find that perfect fusion between to chain a vocal to a strong, energetic record. I think that something special can happen. Going into 2020, my music is going to be a mesh of what my past year-and-a-half have been music-wise.

Is there anything that you would like to say to fans or aspiring producers based off of your experience making music and growing as an artist?

I am a constant learner of music every day. But, I think the one advice I would have is to hone in on what’s true to you. You are the only person that can tell your story best. I think we live in a time where it’s easier and easier to see what is genuine and what is not. When you take your time, when you challenge yourself, and when you get to that point, I think that’s when something special gets created. That’s something that I’ve been able to learn as a musician.