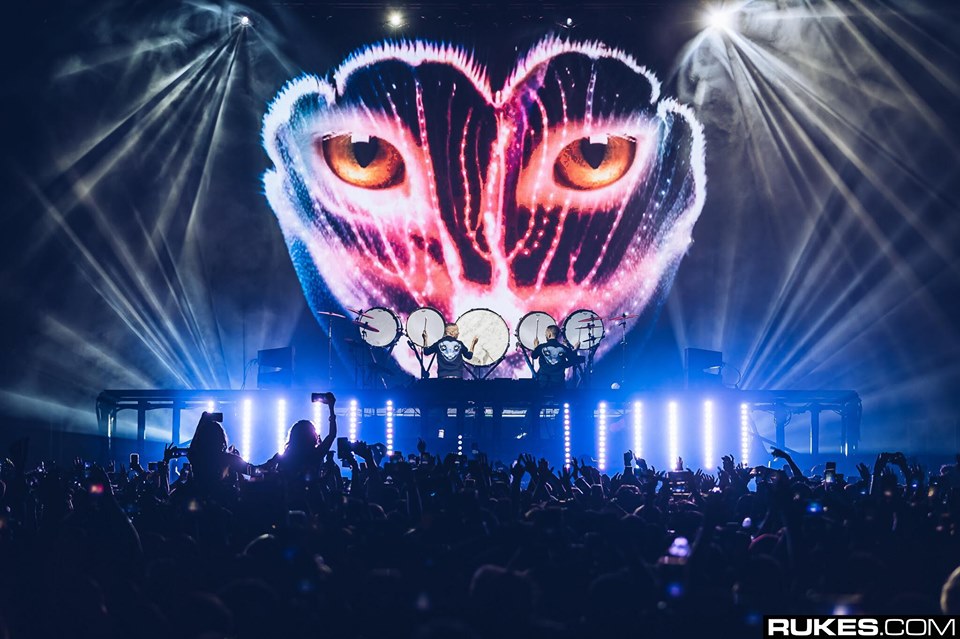 Galantis Take Over L.A. for Two Sold Out Nights at the Shrine [Event Review]

Hard to believe it’s been five years swince Swedish duo Galantis first burst onto the scene with their indelible classic song Runaway (U & I). The production/DJ duo of Christian Karlsson and Linus Eklow has become a veritable hit factory since then, putting out some of the most iconic anthems in dance music including smash hits like “No Money,” “Peanut Butter Jelly,” “Love on Me,” “Tell Me You Love Me.” It’s a pretty strong discography, combine that with their incredible live show and heavy touring schedule, and it’s pretty clear why Galantis has become one of the most sought after acts in dance music.

This past weekend Christian & Linus brought their high energy live show and exceptional production to Los Angeles for two sold out nights at the Shrine Auditorium. As per usual, they had a full drum setup behind them in the DJ booth as well as drum pads. The duo’s colorful iconography, including the many iterations of the Seafox, was on full display as they dropped all of their aforementioned hits as well as other newer tracks like “Bones,” “Holy Water,” and “In My Head.” There was also a live Seafox dancer on stage as well. The combination of lighting and pyro made for one of the most well produced shows I’ve ever taken in.

I would be remiss, however, if I didn’t mention the highlight of the night which was Galantis debuting their upcoming single “Faith” with Mr. Probz and country legend Dolly Parton! While the song has been being teased on social media for a couple of weeks, this was the first time they played it out live, and I can safely say, we have another hit on our hands. A truly incredible production with Miss Parton’s timeless vocals and all of Galantis’s pop sensibilities.

Galantis still have some upcoming tour dates, check them out if they come to your town. Check out the official recap video of their weekend at the Shrine to hold you over until then, and make sure to check out “Faith” with Dolly Parton and Mr. Probz out on Friday!

When we make a song, we listen to it 8 million times. In the studio, in the car, in our headphones….but there is NOTHING like hearing it out LIVE for the first time. Thank you Los Angeles for FAITH's warm welcome!! 🍸🍸 The celebration continues this Friday Dolly Parton Mr. Probz Subscribe: https://smarturl.it/Galantis.YT 🎥: Guerilla McGavin