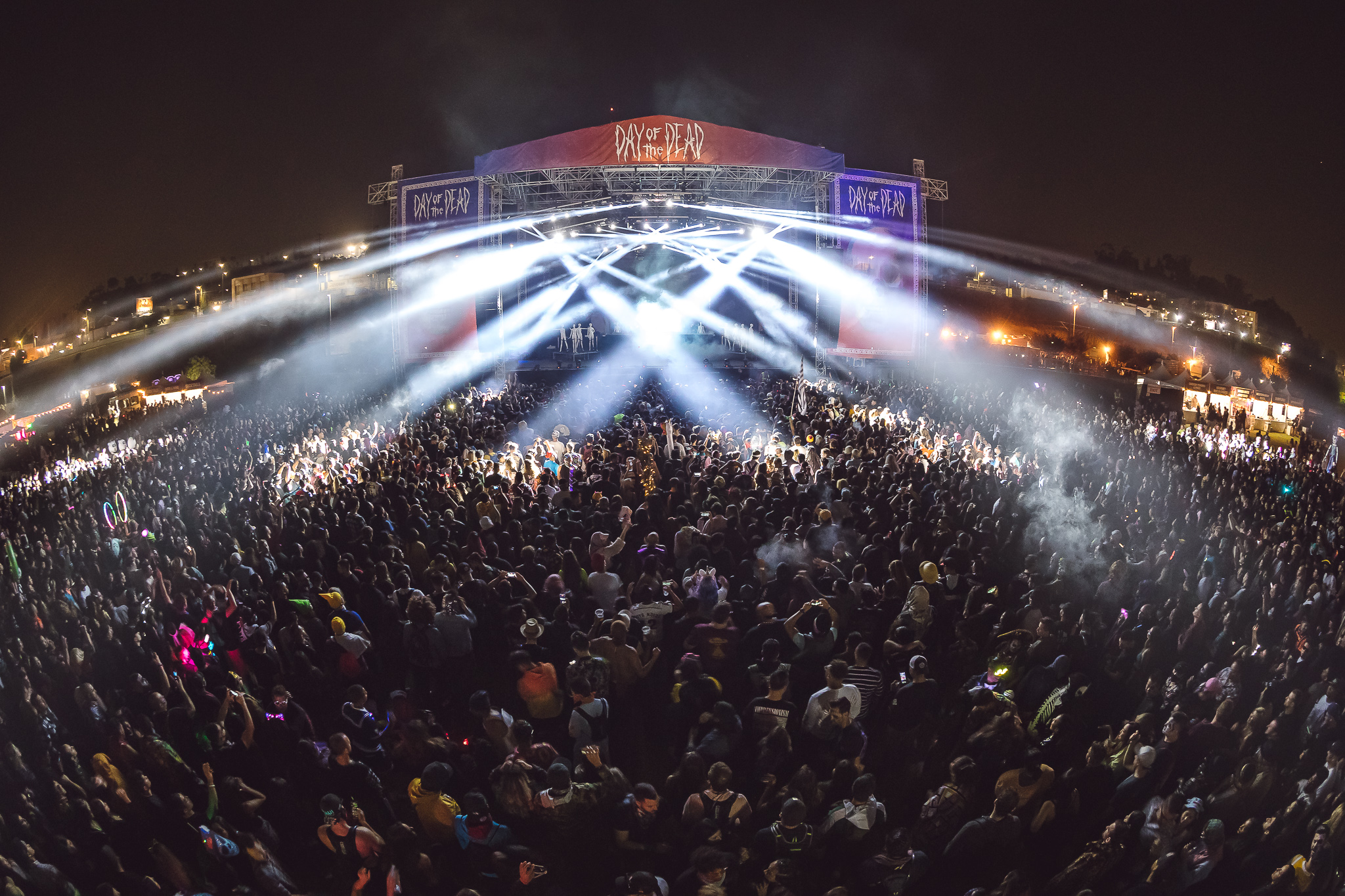 For the second consecutive year, Insomniac and HARD took over L.A. State Historic Park for Day of the Dead. For years, HARD always had a Halloween event, whether it be DOTD or the OG, Haunted Mansion. However, with HARD’s future in flux, Los Angeles saw its last DOTD in 2015. Last year, with Insomniac fully at the helm of HARD, DOTD returned to its original home in Downtown L.A. It was a success, without question, and there’s no doubt that this year’s Day of the Dead was also a success.

HARD brought back virtually the exact same setup as last year. The mainstage was massive and was a spectacle of production to be lauded through and through. The second stage was considerably more intimate. There were plenty of decorated “sugar skulls” throughout the park grounds as well as tombstones and decorative flowers. There was even a wandering mariachi band.

In case you didn’t know, Dia de los Muertos (Day of the Dead) is celebrated throughout the Hispanic world, but especially in Mexico. From Wikipedia: “The multi-day holiday involves family and friends gathering to pray for and remember friends and family members who have died, and helping support their spiritual journey.” One of the cooler aspects of the re-vamped DOTD is this recognition and celebration of the local culture here in Los Angeles (and Southern California, at large).

In terms of the music and vibe of the festival, starting with last year, DOTD kind of feels like the younger hipster brother of Escape. From the lineup to the production, it feels like HARD is going for more a niche audience. Let’s take a look at the lineup and go through the performances.

I arrived just around 5:00 in time for 1788-L’s set. This guy is one of the fastest rising producers in the game, putting forth his indelible mix of mid-tempo and dark bass. While those four numbers are getting ingrained in our heads, 1788 has also become one of EDM’s most sought after collaborators, teaming up with the likes of Rezz, Kayzo and Ekali. He also brought out Blanke to play out their upcoming collab, as well. Truly a tour de force from the masked DJ.

From there, we started getting those HARD vibes. The next set was from electro-pop singer/songwriter Elohim. EDM fans probably know her from her vocals on the Glitch Mob’s “I Could Be Anything” and Louis the Child’s “Love is Alive.” This was a set that had some serious Coachella vibes, Elohim had a live setup going, with keys, some drum pads and I’m guessing Ableton. A vibey performance, this was the set that truly set the vibe for the night.

Tokimonsta followed that up with a truly impressive performance, veering from groovy house to heavy bass and trap. I’m not sure what others’ expectations were from the Korean-American producer/DJ but she exceeded any set notions I had of what her set could be. She told the crowd they were about to go on a journey, and that’s exactly what happened. There’s no doubt that crafting a DJ set is a difficult task, but it has to be even more difficult when you’re dropping a set that spans genres and isn’t necessarily from one discography. In that regard, Tokimonsta dropped a near flawless set.

After that ZHU took the stage for his Blacklizt set. This is essentially ZHU’s afterhours set, nothing but deep house tunes, while his “Cocaine Models” adorn the stage behind him. While it was a thoroughly enjoyable set, especially when he dropped his latest track “Came for the Low” to close things out, if you’ve seen Blacklizt, you knew exactly what was coming.

Finally, it was time for the moment everyone had been waiting for, Dog Blood was ready to close out the night. The inimitable combo of Skrillex and Boys Noize had the place absolutely rocking with a rousing set of house, bass house, and a true treat, Haddaway’s “What is Love” AKA A Night at the Roxbury Theme. The two legends of dance music made their impression felt in their first appearance at a Southern California HARD festival since HARD Summer 2017. The stage remained dark as fog machines filled the now dancing park grounds. The only lighting was the vivid red ceiling lights of the stage, some flashing light pillars behind the decks (they recalled the flash of an old Polaroid camera), and then finally mind blowing lasers that fired off into the night.

There you have it, the performances were fun and diverse, getting around and accessing food and drink was easy, and it was a good time all around. But, it didn’t seem like it was the biggest crowd I’ve seen at L.A. State Historic Park. It seems like the crowd size kind of plateaued around during Elohim’s set between 7:00-8:00 and never really got bigger until it finally filled out once Dog Blood started playing. Again, the event was very positive experience, but it remains to be seen if Day of the Dead will return next year. Especially with Insomniac sure to go big for the 10th anniversary of Escape next year taking place on actual Halloween. That would obviously push Day of the Dead further back into November. Whether it does return or not, like the holiday it celebrates, we’ll always have fond memories of the party that is Day of the Dead.