Rumor has it that following a series of twitter conversations, information about the release date of a potential Daft Punk single might have leaked. Not too long ago, on the favorites page of the famous French electronic magazine Tsugi, the title Renoma Street appeared next to the group Daft Punk. After being confronted with it over twitter, the editor in chief of the magazine, Patrice Bardot, simply responded “21/7”, thus potentially pointing towards July 21st. Interestingly enough, July 21st is also the same day as the release date of the magazine’s summer compilation. In addition there have been news from website Factmag that new Daft Punk album will be due by next month. So will we start seeing a slow release of content over the next few months starting this July or will the entire album be released at once? We will have to wait and see.

Chic’s Nile Rodgers and Mark Ronson will be hosting a ”Freak Out! Montreux Dance Party” event on July 13th as part of this year’s Montreux Jazz Festival which is set to feature ”VERY SPECIAL DJ’s”, further fuelling the rumours that 2012 will see Daft Punk make their first official DJ appearance since 2010’s surprise surprise appearance at Madison Square Garden.

UPDATE: Factmag has just released this statement concerning the news:

“We just spoke so Tsugi, who claim that “the answer will be on the next issue”. Note: “on” rather than “in”, which implies that it may well be on a cover CD. Pitchfork have, as of tonight, posted that there won’t be a new song – still no public word from camp Daft Punk though (nor is there likely to be). Guess we’ll find out some Tsugi’s next issue.” 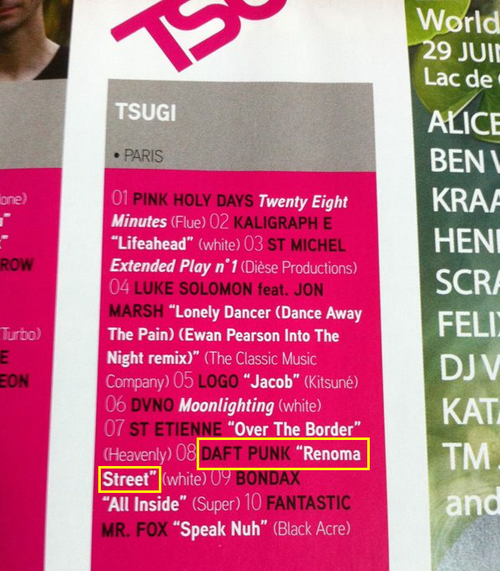