Recently a video surfaced concerning David Guetta and his live set at Tomorrowland. As many of you know a good portion of the festival was broadcasted live, and during a few short minutes some attentive viewers caught an oddity, the Frenchman’s faders were all set at zero. Now you do not have to be a professional DJ to understand that if all faders are set at zero, the music would not be playing the way it is during the short clip. As a result many have once again used this opportunity to begin criticizing the performer, claiming he faked his entire set. 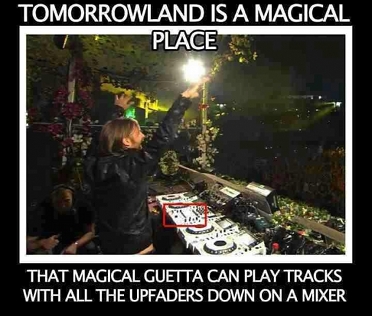 Now a few days after the clip went viral, multiple parties stood up in defense for David Guetta (who has yet to make a statement himself), one in particular being Tomorrowland themselves. In an official statement Tomorrowland stated:

“During the years, Tomorrowland – together with the artist – has developed an unseen high quality show. The massive fireworks display that only occurs in the very last minutes of the set need weeks of programming, so as to get everything perfectly synced in order to create an experience never seen before.”

And later chimes in:

“All respect for David Guetta, one of the greatest DJ’s on the planet!”

“The reason why all faders were down as claimed is because there was a power outage and a moment of silence for a good 10 mins if I remember correctly, could have even been longer. If this happens and the power comes back on you don’t want the music to start playing again where it left off or at a later point in the track abruptly, because that would also create ammo for all those critics and negative people out there.”

Now the problem with having so many different parties involved, attempting at making themselves heard is that there might be some miscommunication as to what actually happened and should be said. Was there an actual power outage or was it in preparation for the fireworks? This is just a supposition but I doubt fireworks could go off with a power outage around the festival, but I could be wrong. In the end I am sure there was a good reason why David Guetta‘s faders were down and considering how publicized the entire event was, I doubt David Guetta would take the risk of ‘faking’ his entire set for the whole world to see.

We’ll keep you updated as we learn more and let us know what you think in the comment section below.

Zedd will be releasing debut album “Clarity” on October 9th