Hey guys! This is Andrew Quigley over here and I am filling in for Jacob Marmor this week to bring you the latest and greatest in Trance. If you are an avid follower of my articles, you already know that I have a deep love and appreciation for all things Trance and only choose the highest standard of music to feature to my readers. That being said, let’s just jump right to it with outstanding Singles, Releases and Trance News to get your fix. Make sure to check back here every week to keep up with this crazy world of Trance music!

Falcon takes things in a wild new direction of sound with his release of the playfully named track, Punch. Instead of pure Uplifting, this track is more Progressive with Electro undertones and seriously packs a lot of raw power at the drop. Out now on Air Up There Recordings: http://www.beatport.com/release/punch/1045509

Above & Beyond have released a new single this week entitled, Black Room Boy. I am always really excited when these guys release a single, because each track is always quality. This tune is no different with the trio utilizing the shimmering vocals of Richard Bedford and jacking some seriously mental synths. Out now on Anjunabeats: http://www.beatport.com/track/black-room-boy-above-and-beyond-club-mix/4166013

Juventa pulls up the energy up to fifth gear with his new single, Bitsmash. This track packs pure explosive energy and incorporates some interesting production techniques to give us some truly unique music.  Out now on Enhanced Recordings: http://www.beatport.com/release/bitsmash/1045738

Kago Pengchi & Alexan join forces this week to give us a great Uplifting tune with Sagarmatha. A beautiful little track, it has a gorgeous chord progression and a lovely, dreamy drop to boot. Also included is the Egyptian remix of Phillippe El Sisi and a cool little downtempo rendition of Antony Waldhorn with his Guitar Mix. Out now on Trance All Stars Records: http://www.beatport.com/release/sagarmatha/1018152

Dash Berlin has released a cool little track with the great vocals of Chris Madlin called Fool For Life. Pulling up the 4 AM Remix, it is Trouse at its finest with wobbly wubs and fresh, clean synth stabs. Included is an Anthem remix by Estiva and a more Uplifting, hands-in-the-air remix of Tomas Heredia. Out now on Aropa Records: http://www.beatport.com/release/fool-for-life/1046791

Andy Moor is at it again with his brand new track, Love Again, featuring the sweet vocals of Betsie Larkin. Noted for his unique brand of mellow and pure Trance, this track shatters expectations yet again and showcases the technicality of this artist. Included in this release is a nifty Progressive Trance remix from Daniel Wanrooy and a hotly anticipated remix from Andrew Rayel. Out now on AVA Recordings: http://www.beatport.com/release/love-again/1042623

Thomas Datt has had the pleasure of securing the rights for Discover Records 100th release. And with his recent works, he does not disappoint to showcase the qualities of the label. With the great vocals of Ben Lost, the Dead Machines EP is quite the impressive release. Included in it are the Club and Original Mixes as well as a new track entitled Narani, with a blistering remix by Matthew Dunne. Out now on Discover Records: http://www.beatport.com/release/dead-machines-feat-ben-lost-narani/1040959

Pulling high into the realm of Tech Trance is none other than Eddie Bitar. He has been taking over the scene by storm lately, and his new track Rollarcoaster has been a DJ favorite, played by such artists as Bryan Kearney, Indecent Noise, Photographer and Matt Bukovski. There are some insane sounds in this Director’s Cut and it has the potential to explode the energy at any dance floor. Also included is a wonderful Uplifting remix by Ahmed Romel. Out now on Mental Asylum Records: http://www.beatport.com/release/rollercoaster/1038120 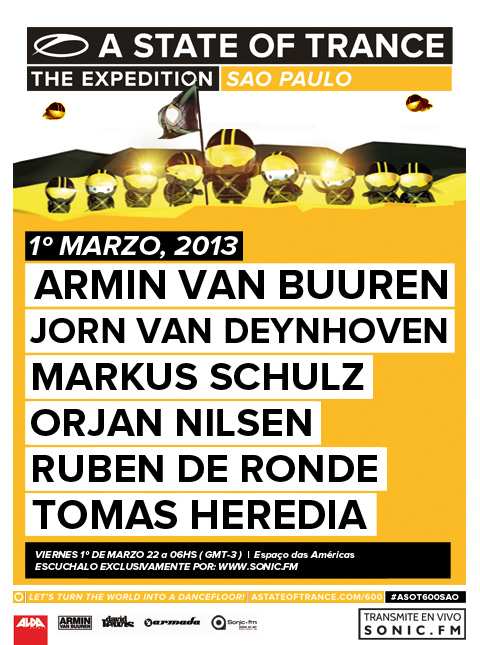 Armin van Buuren and his crew absolutely CRUSHED it in Sao Paolo this Saturday as they continued on their world dominating ASOT600 tour to turn the world into a dancefloor. From Trouse to Progressive Trance, to Peak Time to Uplifting (and even Progressive), Sao Paulo got a little dose of everything regarding Trance in one, action packed night. And right here on Entranced, you can listen to all the livesets so you don’t miss a single part of the action!

After many months of speculation, Armin van Buuren has finally confirmed his 5th studio album called Intense, which will be released upon the world on May 3rd. This will exentuate the talents of Armin van Buuren since his 2010 release of Mirage and judging on what he has said, it is looking like his most adventurous album yet. Here is what he had to say about it:

“It’s been an intense 2 years in the making. Being a perfectionist, some of these tracks have taken me months to finish. I’ve tried to incorporate as many real instruments as possible, including a live orchestra and the rock band of my brother Eller, Bagga Bownz. It’s been an honour to work with such talented artists, singers and songwriters.”

While Armin has been showing his need to expand his abilities with recent releases such as his remix to Zedd’s Spectrum and his collaboration with W&W on D# Fat, we can only dream of the possibilities that are in store for this new release. One thing for sure though; it is an aptly named album to which some amazing music is in store from the number one DJ in the world.

Make sure you keep up to date with Trance by following us on Twitter! @Jacob_YourEDM and @Andrew_YourEDM. And also, remember to keep it locked at Your EDM. Cheers.