Another Year, Another Daft Punk Rumor

by Jacob Marmor
in EDM News

With Daft Punk back in action the rumor mills are heating up. The latest rumor? That the iconic French duo will be headlining Coachella. This rumor happens every year without fail, and year after year is without fail one of the most spread during festival season. Some fuel was just added to the rumor fire as Daft Punk’s VEVO Channel on YouTube, which is linked with Songkick, announced the duo would be performing at Coachella in just a few weeks (see pic below.) As we found out a few months ago, Songkick isn’t foolproof and has blasted out false Daft Punk rumors before. Additionally, organizer of the world famous Bestival, Rob da Bank, told NME that they “got told months ago that Daft Punk were definitely not touring next year, but it keeps the rumor mill going”. Although we would love to be proved wrong, it doesn’t seem that Daft Punk will be touring, and thus will not be at Coachella. But fear not, we at Your EDM have your backs and will be sure to keep you posted should any new information arise! 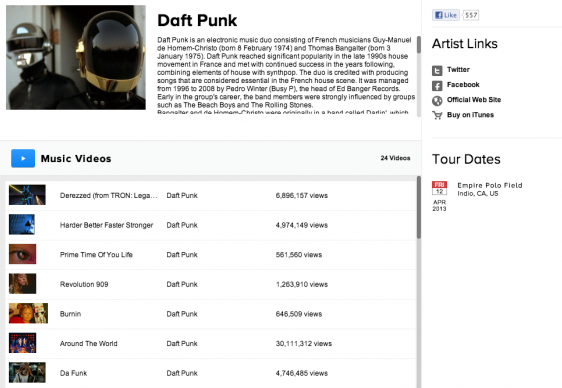