With the sheer overload of electro house producers in today’s scene, it can be hard to get a bead on who the true talents in the genre are.  While many are making their mark in the “new school” of electro, Australian duo Bikslow have stood apart from the rest, steadily making a name for themselves with their melodic sound and consistent releases.  Noted for their Plasmapool releases like “KiniMooper” and “The Iron Giant,” as well as their crowd-pleasing bootlegs (including their massive rendition of Swedish House Mafia’s “Don’t You Worry Child”), Bikslow are definitely ones to watch in the electro house community.  Their authentic production technique and fresh sound are helping to lead electro house in a bold new direction, and as they say, “a good melody can make a track sound as good as any wobble can!”  I got the chance to talk with Bikslow about their origins as a group, their production style, and their plans for the rest of 2013.  Read on for the full interview.

Your EDM: For those of us who don’t know you, please tell us a bit about yourselves.

Bikslow: Hey there! We’re a duo from Brisbane, Australia consisting of Lachlan Marsh and Tom Gurnett. We are currently signed to Plasmapool, and we love making music!

Your EDM: Tell us about your musical background.  Did you play any other instruments or work in any other genres before making house music?

Bikslow: We have both always played piano for fun, and Tom plays anything he can get his hands on as well. House music was the first genre we ever had a crack at producing, but we grew up listening to all sorts of music from hip-hop to alternative, so this helps us create some interesting tracks.

Your EDM: What led you to produce house together, and when did you create your first track?

Bikslow: We went to high school together and always had in interest in dance music, so it sort of just went from there.  We produced our first unofficial track about 2 years ago, and our first release was 7 months ago.

Your EDM: What was the first production software you worked with?  What are you guys using now?

Bikslow: We started out using FL Studio, and still use it to this day.  It’s such an innovative program and deserves a lot more attention then it gets. We also use Pro Tools for recording vocals/instruments, as well as for mixing sometimes.

Your EDM: From our standpoint, you’ve seemed to work mostly in the electro house realm recently.  What are your thoughts on it as a sub-genre in today’s scene?  Is your guys’ natural sound “electro house,” or have you two geared toward it gradually over time?

Bikslow: We think Electro House is something that lacks definition at the moment. You see a lot of big-room tracks getting grouped in with Electro House these days, so a lot of the good stuff gets lost. There is still some amazing stuff being produced at the moment–you just have to dig for it! We just make stuff that sounds good to us, and 90% of the time it comes out as Electro House.

Your EDM: There’s a large school of electro house nowadays that is heavily influenced by the rise in dubstep–much more glitchy and wobbly than the traditional groove-based design of house music.  You guys, however, seem to put a lot of melody into your work, and there’s a ton of groove in tracks like “KiniMooper” and “The Iron Giant.”  What’s your typical production process like, and are there certain elements you like to include in your tracks?
Bikslow: A good melody can make any track sound as good as any wobble can! Our process typically begins with one of us just coming up with just a simple melody or loop. Then we’ll meet up in the studio and start trying to work out the basic arrangement of the track. That probably only takes up about 20% of the production process.  The next 80% is all just fine tuning, getting the mix crystal clear and making small adjustments.  But it makes all the difference! 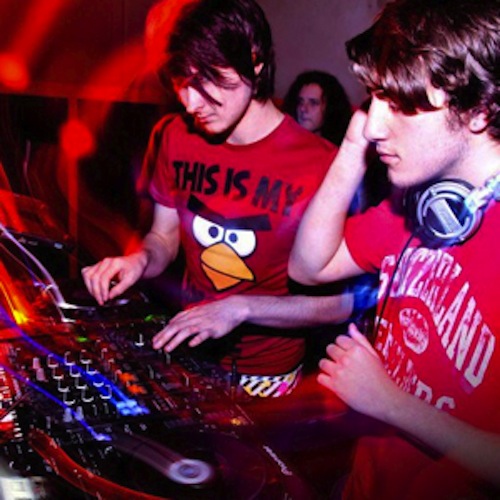 Your EDM: Today’s EDM landscape has shifted dramatically. What with the rapid growth in areas like North America and Asia (along with mainstays in Europe), Australia sometimes gets lost in the shuffle.  But it has a historically-vibrant house scene and has given us great producers ranging from Tommy Trash to Dirty South.  What is your take on the Australian house scene?  Has it changed in any way over the past few years?

Bikslow: The Australian music scene finds it hard to compete with areas like North America simply because we lack the population. There are some strong underground scenes, though, and [the electro house sub-genre] Melbourne Dutch/Bounce is absolutely on fire there at the moment.

Your EDM: You’ve crafted some massive bootlegs, including your masterful electro rework of Swedish House Mafia’s “Don’t You Worry Child.”  Are there any other bootlegs or remixes on the horizon?

Bikslow: Yes we’re just working on another bootleg now!  We love giving out freebies to our fans and friends!

Your EDM: I have to ask–what is with your guys’ obsession with penguins?

Bikslow: Good question! The first track that we ever completed for professional release had a real disjointed, fidgety sound to it. So we decided to call it The S.A.P (Socially Awkward Penguin) and then it just sort of stuck!  (Ed. Good to know the Bikslow boys are familiar with reddit!)

Your EDM: What can we expect from Bikslow for the rest of 2013?  Any big tracks coming up?

Bikslow: We have just finished a remix of “American Wasteland” by Joe Garston, which has been amazing because he was such a big inspiration for us when we first began writing music. And we’ve got an upcoming collab with Hypster.  Maybe a couple of other artists too, if we can make it work.

Your EDM: Tell us about your recent gigs.  Are there any touring opportunities on the horizon?

Bikslow: We have been playing some feature gigs around Brisbane and the surrounding area, but are just now starting to look at touring nationally. We’d really love to do a tour in the states as that’s where the majority of our fan base comes from.  So hopefully we can make that happen one day soon.

Your EDM: Lastly, feel free to make any plugs/announcements to our readers.
YourEDM is a great site/community so make sure to give them the support they deserve!  Also make sure to check us out on our Facebook/Soundcloud.

Thanks again to Bikslow for a very entertaining interview.  Be sure to check out Bikslow’s Facebook and Soundcloud, as well as follow them on Twitter.  Check out their tracks on Beatport.  And as always, for the latest in news, tracks, events, and commentary, keep it tuned to Your EDM.