Today, Zedd voiced his opinions on music fans via Twitter. After seeing the abuse that artists take from their so-called “fans” on social media, it comes as no surprise to me that an artist is fighting back.

I’m glad twitter brings artist and fan closer BUT…That turned into people being rude and saying mean things to the artist just to get attention and an answer. Such a selfish, stupid behavior…

Zedd couldn’t have said it better. Twitter, although it has upsides, has put artists and fans on more or less the same level. The issue is that the bigger an artist gets the more they have to put up with, well, as Zedd so perfectly put it: “selfish, stupid behavior”.

EDM artists are truly versatile, in the sense that they will adapt and change their sound as they grow. Unfortunately, as a result, such producers are most susceptible to criticism, especially when adapting to a new sound, or genre. There seems to be an ongoing trend to attack artists that reach a certain level of popularity. Just look at Skrillex, as he rose to fame many people began to criticize him and call him a sellout, saying he had crossed over into the realms of pop.

When I was a (young) kid the only thing I wished for my fav bands was exposure & success. I’d celebrate if I saw/ heard them on TV: radio.

Maybe electronic fans should take a step back. Instead of becoming jealous that they now have to share their favorite artist with the world, fans should be elated that their beloved producer is experiencing success. 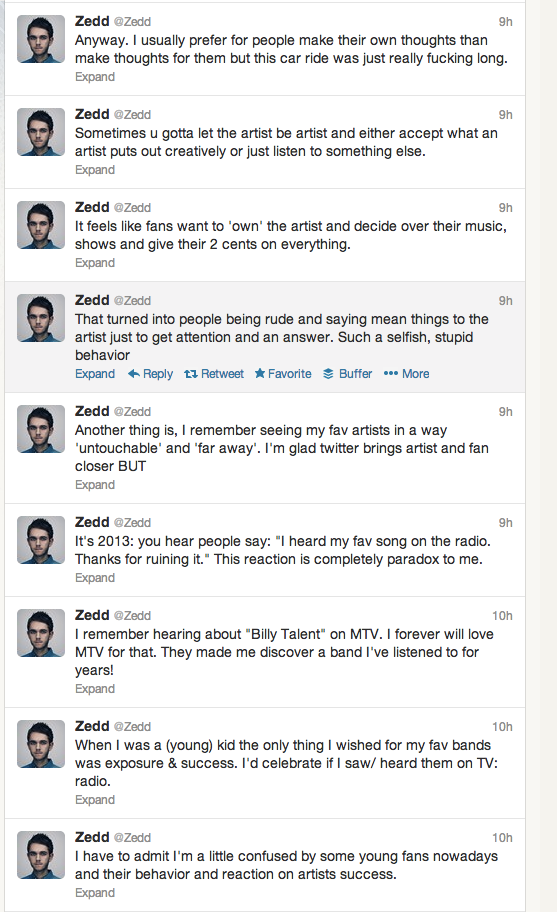