I’m standing outside the dressing room, near the artist trailers on the EDC grounds, and still can’t believe it.  In a few minutes I’m going to interview one of the most gifted musicians in the world: a skilled producer, a classically-trained pianist, a label owner, and a transcendent force in the EDM scene.  He’s the main reason I got into house music in the first place.  Six years ago his soulful grooves and high-powered energy spoke to my soul at a time when I didn’t even know what a sawtooth wave was.  I’ve followed along with his music for a long time, and now I’m going to get the chance to pick his brain.  His tour manager, a bearded man who looks to be in his 30s and goes by the name “E,” lets me know that I’ll be waiting just a few more minutes.  I pace back and forth, going through the questions I’ll be asking in my head.  Finally I hear, “You ready?”  The door to the dressing room opens, a few people walk out, and I can make out the skinny figure of a man sitting inside.  “Yep,” I answer.  “I’m ready.”  It’s time to talk with Wolfgang Gartner.

I walk up the steps to the tiny room and there he is, reclining on the couch inside.  Whatever preconceptions I have about Wolfgang maybe being uptight or unfriendly go out the window–he greets me with a handshake and a smile, and seems incredibly laid-back.  I make the introductions and give him my compliments, telling him how much I appreciate the chance to talk with him.  “My pleasure,” he says.  There’s about an hour to go until he goes on for his live set, so we’re quick to get started.  We have a lot to talk about, after all.

Apparently, he only just got into Vegas the night before.  I ask him what he’s been up to the past few weeks: “I went on my first vacation in 10 years,” he says.  “I needed it more than anything, I was about to go insane…I went to Maui for a week and turned off my phone and internet, and that was actually pretty healing.  Then I came to Vegas, we just got in last night.  I played part of my residency at Tryst at The Wynn, and then we just got here only 15 minutes ago.”  He’s excited to play at EDC.  “I haven’t been here in two years, so it’ll be interesting.”  He’ll be playing a bunch of unreleased tracks off of Kindergarten Recordings for his upcoming set, which I’m sure the crowd will absolutely go crazy for (not that they won’t be going crazy for Wolfgang already).

“My management put the leash on me and took me off Twitter before I ruined my career,” he jokes.  I tell him we’re actually fans of his tweets at the site, and he laughs. “Thank you!  A lot of people aren’t because I’m kind of a dick sometimes,” he says only half-jokingly.  I tell him we also appreciate honesty, and he laughs.  “It’s honesty is what it is!  I just don’t have a filter.”  It’s this honesty that we appreciate from Wolfgang–honesty of a man who has spent over a decade in the scene, making music, spinning at live sets, and becoming known as one of the most artistically-minded producers in the world.  He takes pride in his work, and he feels the need to respond to some of the naysayers–a topic we will dive into deeply later in the interview.

The topic then shifts to his own label, Kindergarten Recordings, and its recent rise through the house music scene as one of the most authentic upstart labels around.  This is actually the second iteration of Kindergarten, as Wolfgang Gartner himself used his label way back in 2008/2009 to launch a series of his own self-released singles, including “Hook Shot,” “Clap,” and the “Candy EP.”  Now in its second version, Kindergarten Recordings is a hotbed for young, up-and-coming talent like Charlie Darker, Popeska, and DallasK.  I ask him what he looks for when he signs a track or artist, and his response is an honest one.  “For me, it’s all about good music.  As long as it falls under the umbrella of house music, whatever sub-genre that might be–complextro, electro, progressive, tech house, disco house–as long as it’s really amazing music, we’ll sign it.  Because I love all of that stuff.”

He continues describing this process, which sounds like a surprisingly organic one: “My A&R works full-time to go out and find all this music.  He discovered Charlie Darker, he discovered Popeska.  He brings this stuff to me, and we go over it together to hear who sounds the most promising.  And then as a result, my manager has ended up signing Charlie and signing Popeska to management contracts as well.  In the end, we’re looking for artists who are unknown, undiscovered, who have incredible talent and potential, and who are just waiting to be found.”  If the first couple years of its existence has been any indication, then Kindergarten Recordings is well on its way to being a hotbed of young talent ready to invade the house music scene in full force.

I ask him how he conceives of electro house today.  Is there any room for innovation or originality in an age where much of it is dominated by that dubstep-influenced, complextro sound?  His answer is rather hopeful.  “I think there is [room for originality].  This topic has so many different branches, but it’s all become homogenized.  I could go on a tangent on the homogenization of dance music and how all the genres are blending together…but that also means that you can make a style of dance music that people can’t really pigeonhole into progressive or electro or whatever.  And that can be very good.”  I tell him that’s what he does, that a lot of his own tracks vary from progressive, to electro, to old school disco-influenced house.  “Yeah,” he says, “I go all over the board.  Usually you can figure out what style to categorize a track in, but I go from style, to style, to style all the time.”  Indeed he does, with tracks like “Redline,” “Latin Fever,” “Anaconda,” and even his remix of Tiesto’s legendary track “I Will Be Here” switching through different styles with relative ease.  That’s perhaps the best element of Wolfgang’s music, that he can juggle all these different styles and techniques with such ease.  No two releases ever sound the same. 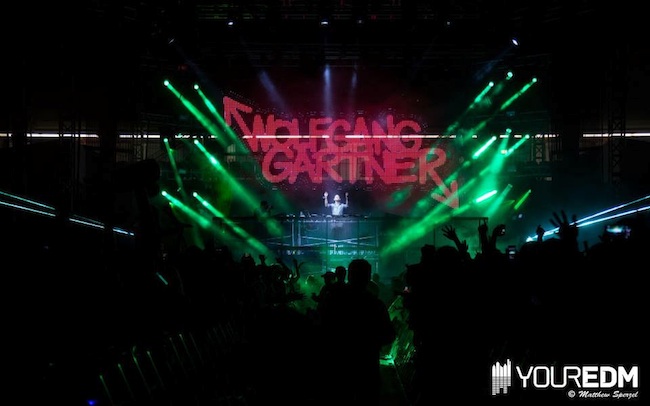 Since he is so outspoken, I’m curious to know something in particular.  I ask what he would change in the EDM/house scene if he was emperor of it all.  We all laugh, Wolfgang says “Oh, God…” and I joke that it’s like opening up a bombshell with him.  He steadies himself, notes that he’ll “choose [his] words wisely,” and begins.  What he says almost blows me away.  “Well, if I could change anything about dance music, I think I would completely obliterate social media.  I’d make it so that Twitter and Facebook don’t exist.  I mean, I know people discover music through it, and Facebook has the personal aspect too.  But as a whole, they create unhealthy relationships between fans/music enthusiasts and artists.  Let’s say you post a new track on your Facebook: 50 people will come on and like it, and 30 people will come on and say ‘You suck, you haven’t made anything good in four years.  I disown you!’  And as an artist, if you’re sensitive or actually have feelings, you realize that ‘I just can’t ignore all this shit.’  I mean, I’ve been doing this for ten years and there’s always been some form of social media, whether it was Myspace, Facebook, whatever.  So through all that, I grew ‘elephant skin.’  But eventually, it got to a point where I could not just ignore all of this.”

I tell him that’s understandable, because he takes pride in his work.  “I can’t ignore haters,”  he says.  “If somebody comes and talks shit to me, I’m not just gonna back down and walk away.  I’m gonna fight back!  So I had to go off Facebook and now, when I post stuff, I’ll just give it to my management to post it because, there’s so many negative people on there that I can’t read all of that.  It’s not healthy for me.  I don’t want to read the negativity, I want to read the positive responses.  But I can’t filter it into the ‘good’ and ‘bad,’ so I just stay away now.”

It’s interesting, and frankly eye-opening, to hear that such a notable and respected musician (with ten years in the scene and a slew of number one releases to his name) feels so hurt by the negativity he receives online.  Most artists or public figures would fire back with an equal amount of hostility, or simply ignore them and say “screw the haters.”  But Wolfgang is different.  You always hear him putting every fiber of his being into every track he creates.  He takes the process of music making so seriously, that at the end of the day, all he wants is to simply be appreciated.  He loves making people dance–he always has.  But in an era where the internet now dominates everyday life, and has subsequently created a particularly nasty and offending type of social media user, even the best tracks and most talented artists will have some harsh critics.  That’s an unfortunate part of the scene now, and certainly makes the proliferation of EDM through social media out to be a double-edged sword.  For all the good it has done for the scene (with free downloads and social media dispersion thrusting talented artists like Skrillex and Porter Robinson into the forefront), it has also made the fan-to-artist relationship a harmful and uncomfortable one at times.  And Wolfgang Gartner makes no apologies for distancing himself from it.

Continue to Page 2 of the interview…