The Business of Blogging

by Jacob Marmor
in Editorials, Featured

Editor’s note: This is a guest editorial from Nappy, a writer at the dance music blog Do Androids Dance. He approached us with the unique opportunity to publish an editorial unveiling the way some blogs go about generating money. Here at Your EDM we emphasize honesty above all and jumped at the opportunity to publish such a unique and revealing article. You can contact Nappy at [email protected]

I have been with Do Androids Dance since their launch in January, and consider myself fortunate to get paid a small yet regular rate by Complex for my contributions. I reached out to Your EDM because I’m a freelance writer and allowed to post elsewhere, and because putting an article questioning the practices of a site under the Complex umbrella on another site under the Complex umbrella isn’t the smartest move that one could make.  I know that my paychecks and position at Do Androids Dance may or may not be clipped once this article starts to circulate.

That being said, I feel lucky to be getting ANY money as a writer, as there are tens of thousands of writers that have yet to make a penny for their work.  Blogs and websites that are helping the explosion of EDM artists aren’t making money outside of minimal advertising revenue, and are as important to the industry as a manager or booking agent is.  If nobody posts content, music doesn’t survive.  And the industry would crumble.

I jokingly said on twitter a couple months ago that I could have been a doctor with all of the money and time I’ve spent on music.  But the flood of favorites and retweets on this post made me realize how true this is to a lot of people in the industry.  I’ve probably run through $20,000 in hardware over the years.  Speakers, 1200’s, serato boxes, needles, computers and controllers.  None of that was free.  I probably spent close to $50,000 in vinyl.  I can’t imagine the cost of gas, drinks, food, tolls, entry to clubs and raves (before my position got me comped everywhere), hotel rooms, flights, rental cars, train tickets, and everything else that comes with chasing a dream.  I’ve easily shelled out 6 figures sorting out my place in this industry. Even now, I pay more out of pocket covering shows and facilitating interviews than I make for curating this content.  The return doesn’t quite seem like it’s worth the investment, and there are certainly tens of thousands of similar stories.

Though promising artists and the writers that make them relevant are often the last to see a check, there is a ridiculous amount of money being made in all lanes of this game once an artist becomes marginally successful.  Promoters and venues and security guards and bartenders and sound technicians and lighting crews and DJs get paid for the shows that writers come out of pocket to cover.  Writers are a part of the industry, and as important to the success of the artist as the people that get paid reasonably well with less personal investment. But writers are treated as if they are fans.  While nobody is scrambling to figure out an ethical and fair way to compensate any of us, under the table payment for our services dangle in our faces like carrots on a regular basis.  And it warrants a serious question:  Do we take money in order to consider placement or write something up, or just hope that doing what’s morally right will eventually be noticed and pay off?

The structure as it stands is kind of fucked up.  PR companies get paid to package material, but the bloggers and writers and websites that give it consideration, decide whether or not it’s good, write it up, and educate themselves on the scene usually get little or nothing in return outside of free tickets to a show that’s going to cost us $50 in gas and parking or a sit-down with an artist to add to their resumé.  They financial payoff isn’t worth the effort.

Someone in my position could easily charge $25 for a review or writeup and $50 to package and place a track on a platform.  These prices wouldn’t be unfair.  Give me your record, and it’s pretty much promised a minimum of 10,000 plays.  Tracks that I put my hand on normally see 30-40k streams each on soundcloud.  Artists get booked for shows from these results.  PR companies are using these links for their email blasts.  Big sites with big budgets are picking at our content and profiting from it.  And I don’t charge anything for my services.  I could keep the standard of “this will only go up if I like it”, charge a minimal amount behind the backs of the platforms I work with, and clear a few hundred dollars a day.  Would I be wrong to attach a fee to my services?

I helped LiveMixtapes launch their sister site, ClubTapes by pulling and packaging a small amount (maybe 5-10%) of their content for the first 6 months they were in operation.  I’ll save you the drawn out explanation of why I don’t hold that team in high regards.  It’s easier to simply give you an idea of what they expect artists to pay for placement on their websites. 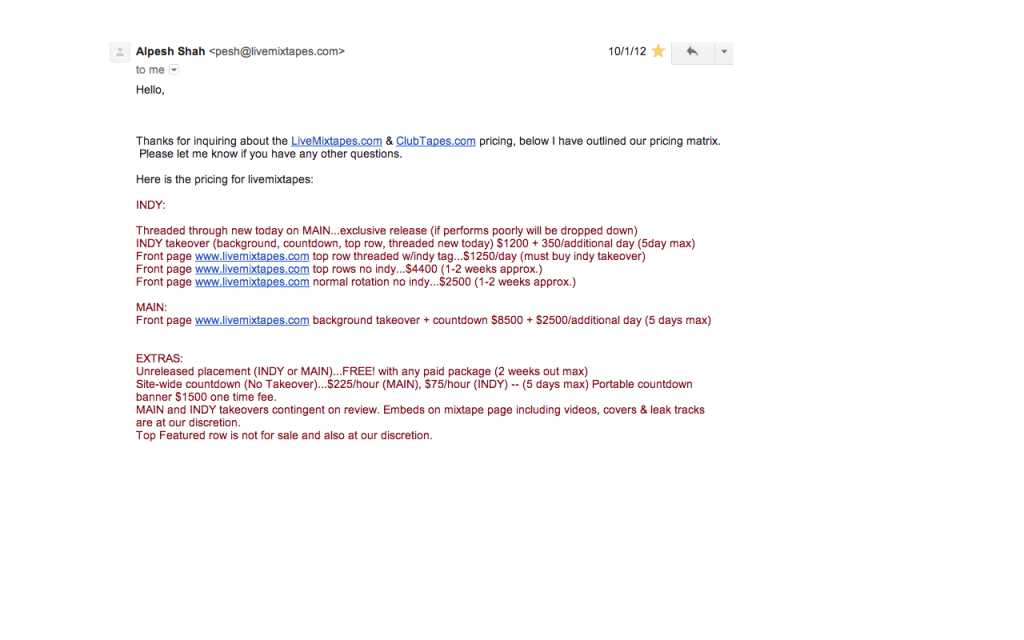 I stopped my interactions with ClubTapes altogether after seeing these fees.  There are several issues outside of the fact that LiveMixtapes expects people to pay these prices.  You are essentially paying for position.  ClubTapes is an invite-only site.  There is nobody there that truly understands the history of electronic music, nobody that knows what records are relevant (and why), nobody asking your permission to post records, and no chance for promising independent artists to compete with other (generally irrelevant) DJs unless you are funneling money into their paypal account.  This team is the same exact team that launched LiveMixtapes.  They know rap records.  If you mirror your ClubTapes release to LiveMixtapes (which obviously will get a broader audience to view your record, it will cost you much more, and your record is getting the attention of rap fans who have no clue what our scene is about.

Ah but be careful when you pull the trigger on this.  I did the DJ mix on Munchi’s “Trap Bubbling” release.  The response from fans is so different on their site than it on Munchi’s soundcloud. 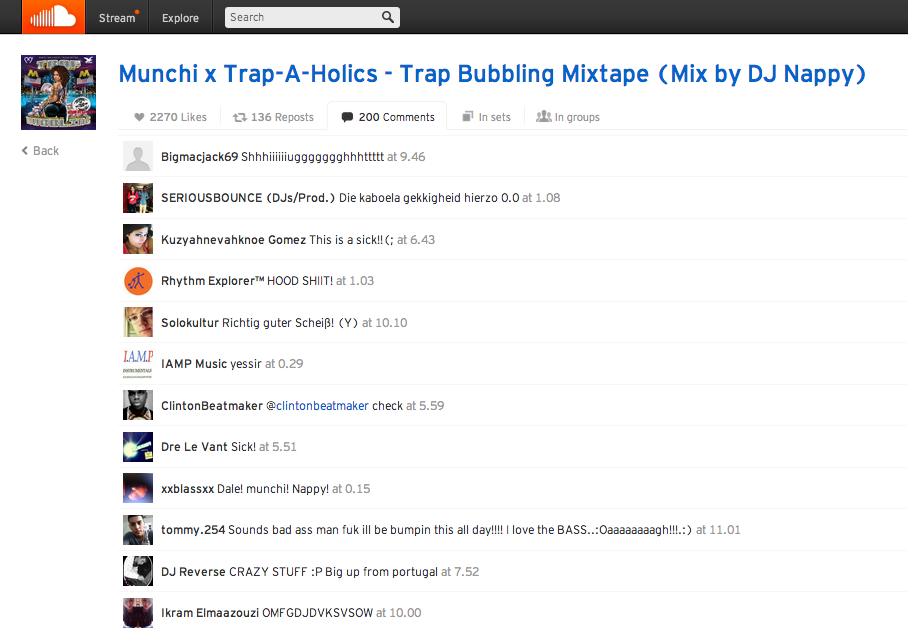 Now check out the responses over at ClubTapes. 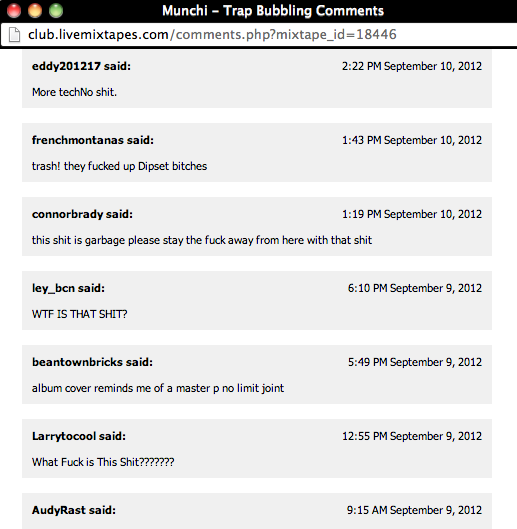 Though you can easily spend $15,000 to have one single release featured for 5 days on the top of their main page with all of the bells and whistles, their numbers are similar to other platforms where you pay nothing.  Not only does the mix have 20,000 more plays on Munchi’s soundcloud page, but the people that found it there actually know why this is a relevant release.  His followers are an educated audience.  Munchi and I would have spent 5 figures to get this record on the front page of LiveMixtapes had I not had a connection there.  Their audience didn’t understand the record.  And it got less plays than just putting it up on soundcloud.   Their link isn’t front page when you google it.  You will see Munchi’s soundcloud, Mad Decent, Hypetrak, and The Dankles.  But not the one offering the packages with insane pricing.  It’s more than a bit ridiculous when you put all of the pieces of the puzzle together.