Earlier this evening, Griz announced on Facebook and Twitter that The Floozies will be releasing their upcoming album on his newly created Liberated Music label. The album, titled “Tell Your Mother,” will be released on November 5.

The Floozies also took to Facebook, pronouncing their excitement to be the first artists signed to the new label. 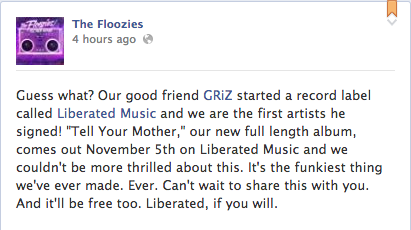 If you haven’t heard of The Floozies, they have a serious funky electro vibe that will have you grooving all night. If you like artists such as Gramatik and SuperVision, I would definitely recommend checking them out. Listen to their song “Love, Sex, and Fancy Things” below.