About three weekends ago, we took a journey to a surreal, fun filled, and beautiful gathering that turned into one of the best times we’ve had all year. We went expecting four days of music. What we got was something much, much deeper. Symbiosis Gathering was like a small village from alternate universe, full of love, creativity and art of all flavors. This post Burning Man gathering was set on the peninsula of a beautiful lake, this gathering sprawled across the earth like nothing we’ve ever seen. This gathering was so massive it even attracted the local news, and photographers from Rolling Stone magazine, and for good reason. There were activities and workshops all over the place . From bass driven yoga sessions and a psychedelic bingo circus, to beautiful spiritual ceremonies full of warmth and acceptance, there was definitely something for everyone. Read on for our full story. 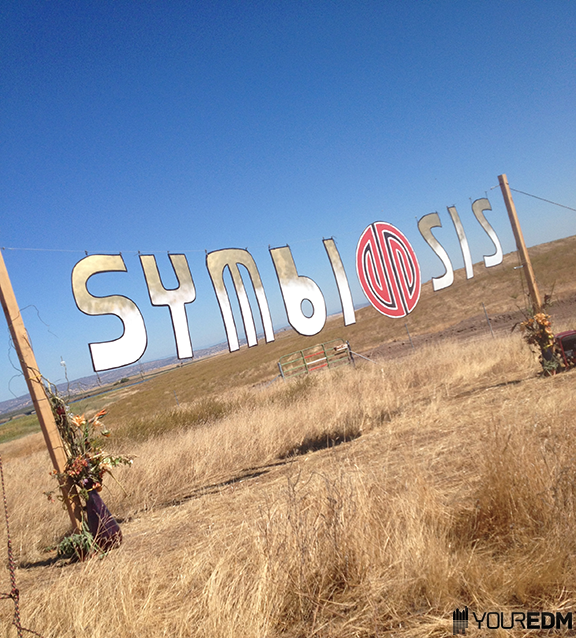 What was really amazing was the conscious mindset of this festival. There was an energy of love and acceptance that permeated the whole gathering and made us feel right at home amongst a group of new friends, and we made so many new ones because of it. Everything was geared to be environmentally friendly as well, and it made us want to leave the place looking better than we found it. This was definitely an excellent and welcome change of pace from the oceans of trash left behind at most summer festivals.  See: Reading Festival Leaves Venue Literally “Trashed” 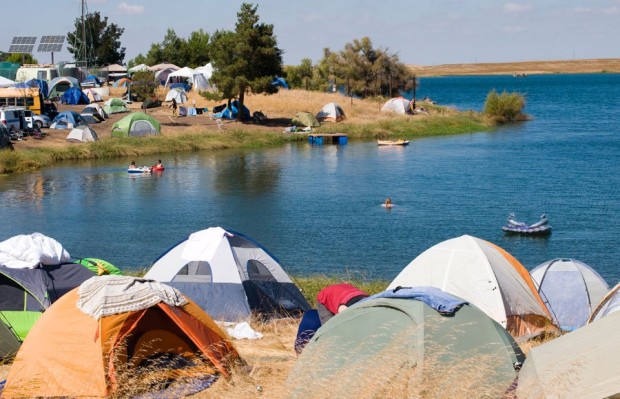 After we set up camp, we set out to explore. Near the entrance, a long corridor of vendors and visual artists stretched for quite a ways before giving way to the wide open beauty of the peninsula and its incredible stages of music. These vendors were selling everything from surprisingly good vegan cuisine, to handmade clothes, trinkets, & jewelery alongside beautiful paintings and amazing digital artwork. A stand that really caught our eye contained masterful hand made bamboo and coconut pipes crafted by a wonderfully jolly man and his grandson These two had come all the way from Hawaii to share their art. Just one example of the inspiring diversity at this gathering. 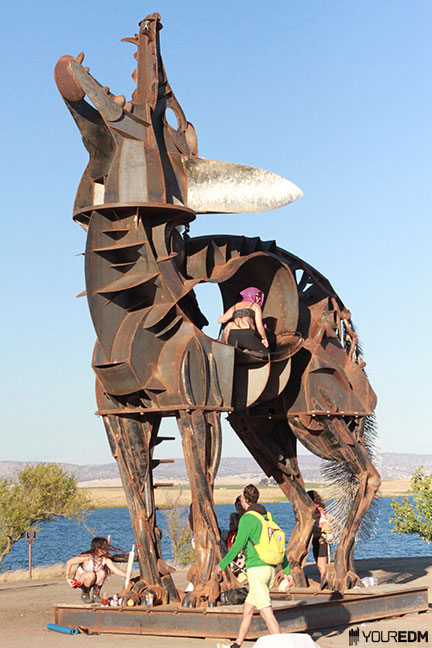 Once we tore ourselves away from all the amazing vendors and visual artists, it was time to check out the festival proper. Huge climbable sculptures and beautifully designed domes and arches dotted the landscape before us. They were so surreal and artistic it wasn’t hard at all to believe that they had come straight from burning man. One of our favorites was a giant, howling metal wolf by the lake next to one of the many stages. Made of huge interlocking plates, it gave us a phenomenal view of the lake at sunset and sunrise when we finally worked up the courage to climb it. At night, all the structural art lit up like an alien independence day. Everything was covered with spinning, flashing, and flowing lights that would make even Hunter S. Thompson take a step back in amazement. There were even huge canvases by the lakeside stage where artists performed live paintings of extraordinary abstract art as the music swept through the night. 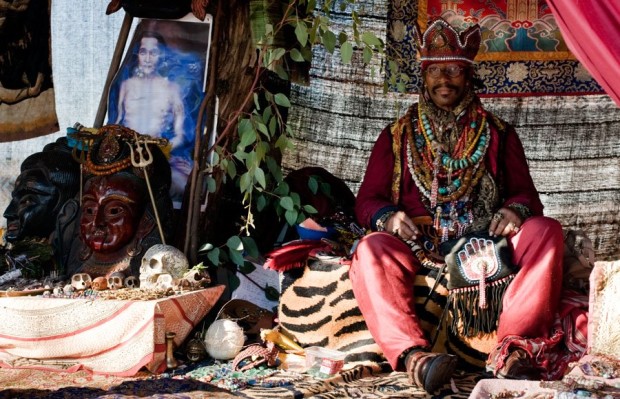 However, what really blew us away, was the music. Symbiosis had everything, and we mean everything a music lover could want. From blue grass, and Tibetan prayer music, to trap, dubstep, and pop-rock, it was all there, accompanied by killer sound on every stage. So many incredible artists we know and love made appearances as well including Russ Liquid, Shpongle, Birds of Paradise, Djemba Djemba, Cashmere Cat, An-Ten-Ae, Ryan Hemsworth, Mt. Kimbe, RL Grime, Psy Fi, Brodinski, and even a surprise set from Mimosa to name a few. There was no doubt EDM was very prominent here, but there was so much more music to experience at Symbiosis that it made for a very interesting and refreshing take on the festival scene.

Now, for the artists highlights. There were so many great performances we had to narrow it down to our top three. Number one on the list, and definitely one of the most talked about sets at the festival, EDM bias or no, was Cashmere Cat. His set was hands down the smoothest, grooviest, bassiest collection of sounds to grace the lakeshore all festival. Cashmere is relatively new to the EDM scene but his name is spreading like wildfire. To say his music is Trap would be doing him a disservice. His sound is one of a kind. Trippy, glitchy, and bass heavy with butter smooth vocals and perfectly timed bed creaks, his remixes of Miguel, Jeremiah and Lana Del Rey have been sweeping the DJ circuit and dropping an absurd amount of panties in the process. However seeing him live was something that can only be described as magical. Cash Cat had us all completely wrapped up in his unique and fresh sound that was unlike any type of “Trap” I’ve ever heard. It was definitely of the best performances of the weekend. In the words of a festival goer, “Cashmere Cat, is the music of the future.” If Cash Cat ever happens to be in your area, do yourself a favor: buy two tickets, bring a girl with you, and thank us later. 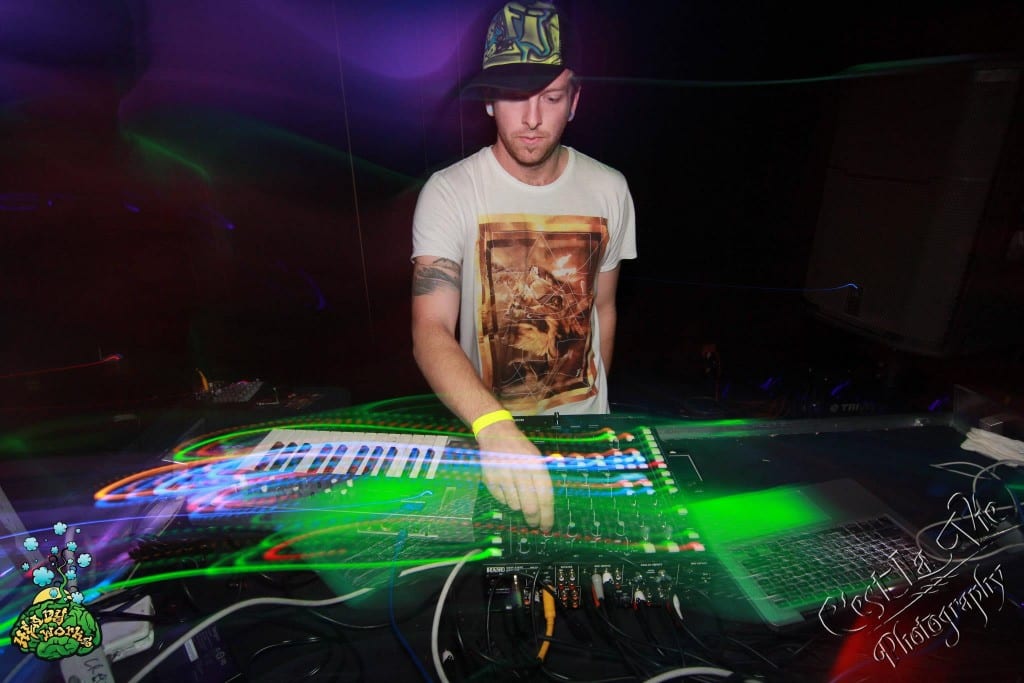 As the run rose over the lake, Saturday morning, Psy Fi took to the stage for a set that seemed to pull the sun straight out of the water. With his glitchy buzzing saws and ambient alien basslines, this was the perfect set to usher in another day of love and light. Hailing from northern California behind the redwood curtain, Psy Fi has spent years crafting amazingly creative, tripped out, and beautifully energetic bass music, and it shows. Playing everything from masterful soundscapes, & heavy glitch style party jams, Psy Fi’s music is always guaranteed to satisfy. As the sun rose over the lake, a crowd that should have been exhausted from a night of insane music was fully ready to experience what he had in store, and he did not disappoint.

After the show we had the opportunity to briefly interview this rising star. Check it out below.

How did you feel about your set?

I felt pretty strong about it. I was really stoked to play some new tunes on such a great system. I love playing on that void rig. Theres a similar system up in my hometown of Arcata and it really hits hard. The timing was great, the energy was there and I got to perform with my super talented friend, Wink. Hes an incredible vocalist and we have a tune that we perform together as well as some others that he freestyles on. Sunrise is also a great timeslot and I feel my music definitely fits that mood.

What did you think of Symbiosis?

As soon as I arrived at symbiosis I could feel a buzz of excitement in the air as it was really an impressive event. The art was spectacular and they had some of my favorite installations from burning man. Every sound system was top notch. It was great to catch up with friends and feel very welcomed there. Huge thanks to Martin Dragonfly for all the help he’s given me over the last year and for asking me to play at Symbiosis. He helps put on some other incredible events that share a similar artistic vision with Symbiosis.

What was your favorite part of the festival? (Any specific artists or certain aspects you dug)

One of my favorite parts of the festival was Psychedelic Bingo. I know they do something similar at Lightening In A Bottle but i’ve never attended. I cant even really explain it. It was rad… I was really impressed by Cashmere Cats set. A lot of people including myself had high expectations and he totally blew them out of the water. His production is insane and thick as hell. Another act i’m continually impressed by is Birds of Paradise comprised of Tyler Gibson and Bird of Prey. They have such an amazing unique sound that blends all of my favorite elements of electronic music together. I’ve been a big fan of theirs for a while and have the pleasure of calling them friends.

What do you use to perform & make your music?

I use Ableton Live to perform and create music. Depending on the set I also use a midi keyboard with all the keys mapped to trigger clips or navigate. I have a very basic studio setup essentially comprised of a Mac, pair of monitors and a midi keyboard. I use a lot of the Native Instruments plugins specifically Massive, Reaktor and Kontakt. I use a lot of the Waves stuff as well. I try to not get too technical with tons of crazy plugins because it tends to distract me from the purpose of writing a tune. Ive been really into making percussion fills from scratch recently.

What was the best festival you visited this year?

Every festival is different and to compare them is like comparing apples and oranges. A lot of festivals have different intentions and objectives and some are able to encompass that vision better than others. Source in Maui and Enchanted Forest were pretty amazing in the fact that I met some really awesome people that I ended up becoming great friends with. The Next Big Festival was off the hook though.

Do you have any words of advice for aspiring producers?

Just keep at it. Don’t worry about the end result. Don’t worry about stupid stuff like “Am i going to make any money at this?” or “Are people going to like this?”. The only reason I say that is because i’ve felt those feelings before and its toxic to your creativity and workflow. Try to find a mentor as well. My homie Ratchet has been one of the biggest helps by being very critical of my music. Ill come to him with a song and instead of him saying “Nice one bruv” he says ” well its getting there but try this….” I feel a lot of the time, everyone wants good feedback on a tune when in reality they need is constructive criticism.

You have a very unique sound. What inspires you to make your music?

I get inspired by imagining landscapes of distant worlds, emotions that run through my veins. I get inspired by people, by the latest news from SETI(search for extraterrestrial intelligence) and movie soundtracks.

Last but certainly not least, it was time for Brodinski, and oh man was it one hell of  a ride. Brodinski’s unique french electro style has been taking America by storm recently and for good reason. A staple at pretty much all HARD events, Brodinski’s relentlessly seamless mixture of hard electro, smooth techno, charmingly odd effects, and groovy vocals have definitely earned him a reputation for rocking the party. His remixes of Empire of the Sun, Destructo, and his parter in crime Gessafelstein, as well as his masterful original tunes have quickly become some of the most popular jams amongst electro lovers. Needless to say, he had us and everyone else going going nuts from start to finish.

Over the course of four incredible days, we got to experience something that we cannot begin to fully put in writing. Symbiosis Gathering was a non stop, surreal look into a universe of love, art, beauty and music that will never be forgotten. It’s already been three weeks and I still can’t bring myself to cut the wristband off. 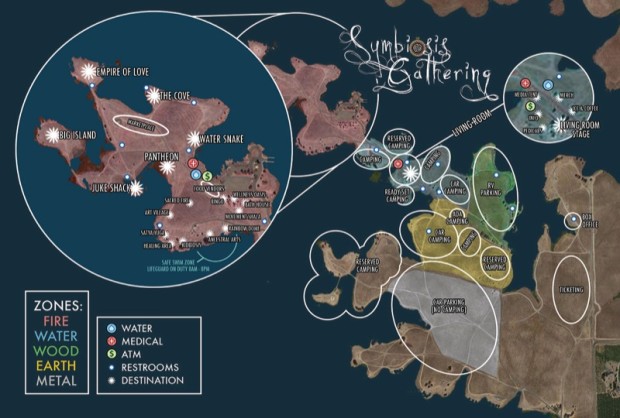 The Confluence has produced some short video recaps highlighting some of the amazing acts.

Rogue releases “From The Dust” from upcoming “Earth EP”