Although this is not a court case, it quite could have been due to the controversy between Diplo and Visualbass Photography being over copyright. Diplo recently posted a picture to his Instagram that was taken by Tobias Wang (Owner/Photographer of Visualbass), however the watermark was cropped out and Tobias was not tagged in the photo. After Tobias took to Twitter to lament is when things got a bit more intense. We go from sarcasm to copyright law to some downright ad hominem action.

The picture above is the one that started this whole battle. Diplo retorted the tweet with “lol we let u backstage to take the pic thanks. how bout you don’t come next year” to which Visualbass made the claim that media pit is not backstage. This brings up the difference (which there is one) between the levels of access people get at shows and what the perks are of one versus another. The bigger issue rests on the fact that credit was not given where it was due though. Personally, I am for the free use of works of art as long as credit is given where credit is due, so with this whole situation I do have to side with Visualbass. Cutting out the watermark was not cool by any means. However events continued to transpire to only juice up this situation.

Now is when we get to the more legal aspect of the situation with Visualbass selling prints of the picture on their website for $2. The law states that prints can be made as long as over 200 of them are not created. There is no official count from Visualbass, but further ambiguity is created because Visualbass is a Canadian entity and they never signed any copyright contract. Copyright contracts are usually presented to photographers so that the artist gains ownership of the images (Which is unfair imo). That is another issue, but the one at hand actually favors Diplo because the prevalence of the sale photos and the lack of evidence from Visualbass clearing illegalities.


Diplo received some attitude and backlash via Twitter from fans and haters alike and proceeded to dish out some of his own that was a (semi) personal jab at Tobias. 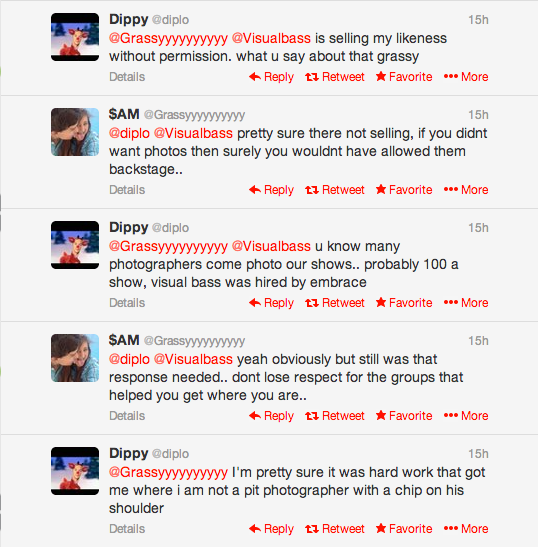 A little offensive, definitely; I am surprised Diplo expressed himself in that manner because he usually is a classy character. Wrong was done on both sides, but I hope this can actually bridge the gap between the musicians and not only the photographers, but bloggers/journalists who find themselves covering these events. A lot of money comes out-of-pocket and many people carry on simply because they love the scene and want to contribute to it’s success and growth. Credit is due as well as respect for EVERYONE who is involved in making this scene what it is. That means the musicians, photographers, journalists, promoters, sponsors and most of all the fans. Which, we’re all technically fans right? So why not give each other the recognition, love and respect that we all deserve for our effort and hard work? That’s not too much to ask.

A full account with much more details can be found in photographer Rebecca Britt‘s article on this very instance.