by Your EDM Staff
in Bass Music, Featured, Interview, Release

While I’m not including the whole list of names which all included “lynn” in someway, the beginning of the story behind the this EP lies in how often that particular name was occurring in thefaded.’s life. Ranging from girlfriends to physical locations, lynn was a common theme when it came to important events from 2010 to the conclusion of the story in 2014 with this release. Even though this is the ending of his “Lynn Era” he’s just getting warmed up.

“Lynn Era was an era of my life that started when I was 21 and I just closed the book on with this EP. We all live our lives in eras or phases, and Lynn Era EP is just my way of telling my story about that era and the beautiful times that happened as well as the ugly.

I called it the Lynn era because that name was very frequent and many events took place around that name. I had about 35 songs written from my Lynn Era sessions and it told, like, the FULL story of that era of my life, but I cut the EP to only 10 tracks and 40mins so it wouldn’t become a bore just me making all these beats talking about myself.”

Let’s get to the music.

It was raining. My take on this track was instantly noticing how unique the beat was. It is filled with a rainy intro and a Sigur Ros sample. It’s one of the chillest offerings from the EP and definitely a tune to cruise around the city to.

“This is a Sigur Ros sample and the drums I did on this song are very atypical. I recorded all the drums myself as organic sounds with my iPhone and then just programmed them. When Lynn Era started (Right before I went back to school in 2010) I wasn’t really making hip hop beats, I was playing guitar and working on other music ventures so that is why this song is the least hip hoppy of all and the drums are so atypical as well. It captured a time when I was not really making beats, hence the sample and drum work, and also signified the end of the previous era and the start of Lynn Era.”

Thank you 9th Wonder. An inspired beat showcasing a heavy influence from 9th wonder and incredibly tooled vocals that’ll hook you in until it perfectly transitions to New Girl. I’m looking forward to some verses being thrown over this one.

“The title is written as the hip hop beats I’ve always made speaking to me, asking me to love it like rappers do. The song begins by completely disrupting When It Started and going into the Sylvers sample because almost immediately when I went back to school I reconnected with my roots as a musician and began making the music I always had. Hip hop beats. This is also why this song is the most rapper friendly and most “rap beat” like, it was me reconnecting with me.”

Zoey Deschanel. This one is about his own new girl, there’s a lot of emotion in it along with some killer sounds. It’s one of the best from the release and it features samples from the show “New Girl” season 1, episode 7. There are four “parts” to this track and you’ll be impressed by the transitional skills used.

“I met a new girl I really started to fuck with (her) a lot that first semester back in school. I also was becoming much more mature and experimental in my beatmaking making which is why this song has 4 separate parts, it represents a time in which I was growing a lot and trying new things in beatmaking”

Everything is secondary. Passive Texts is top notch work. Deep bass, perfectly timed samples to keep it interesting and of course the vocal work is great. Just some good vibin’ music. This track is a great example of how you can hear the tone of the song and really relate it to your own experiences.

“I wrote this about this other girl I use to mess around with who lived on Lynn Ave. I was crazy in lust with her and she would pretty much do anything I wanted when I wanted (hence the lyrics) however, I was beginning to have moral dilemmas about the way I was treating women, her especially. So whenever we texted (which was a shitload) I would send lots of passive and hollow texts with shit I didn’t even mean, I was just trying to get it in (hence the verse).”

Miiiiike Jones! This one heavily samples Pimp C – Pourin’ Up (Feat. Mike Jones & Bun B). Definitely does the original justice and adds some ambient sounds to really give it a fuller/chiller sound. I really love what Faded had to say about this record because the tune itself is really a feel good, up beat sound and when you read what the inspiration was I know you’ll appreciate it even more.

“So now it’s 2011 (a year from When It Started) and me & my moms copped a Kia K5 (Kia Optima) 2011 Hybrid, tricked out dawg. With 2 sunroofs and everything lmao. I’ve always, always, always, been into Texas trill music and Pimp C, UGK, Bun B, and everyone else associated with the scene and I always listened to how they talked about and idolized their cars. This is my take on that. This is me rolling around in my own caddy with the woodgrain (which is a Kia with polyurethane) but it was MY version, you know?”

Bicycle chains. That’s right the sounds are bicycle chains that were recorded and then messed with a bit to get quite a nice sounds that really complements this track throughout it. The first time I

“Me and the girl from “New Girl” (not the show, the song) have become really close and I just enjoy being in her company, even if all we’re doing is talking about nothing. Some of the sounds you hear are bicycle chains spinning that I recorded and did some cool shit with. 2011 was a VERY eventful year in Lynn Era, but in terms of the progression of the EP and construction, I had to cut out a lot of the songs from that year.”

Blunt sunsets. A time where little problems are put into perspective by seeing a person and how much they’ve changed since the last time you had seen them. The melody is mellow in the best way and the vocals just float in the background of the song to carry it along. It features Khinomyte and he lays down an awesome verse which sounds great on the track.

“Skip ahead to 2012, I’ve been dating Jessica Lynn for some time, and I had really dug in to the stoner lifestyle smoking almost an 8th a day and I use to hang with these stoners from my school at Lynn apartments and we’d catch lots of sunsets and have “blunt sunsets” a lot. One of the dudes name was Juan. I’d talk to them a lot about my petty relationship problems with Jessica Lynn which is the first verse, the verse from Khinomyte was a reflection about me meeting with “New Girl” and seeing how she’s changed so much and how much I hated the new her.”

Fucking In Your Parent’s Bed–

This was a good day. This one was the only single to be released from Lynn Era and is probably my favorite. It’s incredibly groovy featuring some great guitar work with smooth, deep baselines.

“A song about Jessica Lynn, and fucking in her parent’s bed.”

Grindin’. The artists who who are most dedicated to their work know that sleep is for weak and the best time to be getting work done is while the rest of the world is taking a break.

“Now we’re at 2013 and I’m crazy busy with things going on in life (full time school, full time work, traveling, hanging with the homies, etc.) and I have very little time to make music. So I start staying up ridiculously late to work on music, and grind while everyone else slept.”

Culmination of emotions. This one is a really emotional track and it completes the EP. Perfectly placed as the last song plus it BUMPS.

“This is for me the most emotional song of the whole era. I made it from the perspective of Jessica Lynn and it was made January 2014. It signifies a whole lot. It’s Jessica Lynn telling me she can’t change because over the time we’ve been dating I tried very hard to change things I did not like about her only to find out it was really myself who I didn’t like. I was the person who I wanted to change, not her; however, I was/still am too afraid of making those changes. So it’s suppose to be like, she’s singing first telling me she can’t change, then the beat happens and it’s me realizing I’m the real problem ’cause I hate who I’ve become/things i’ve done and then the outro is suppose to be me crooning the “I Can’t Change””

I wanna give a HUGE thank you to thefaded. for taking the time to discuss Lynn Era, I for one have had it on repeat since it dropped. It’s truly some solid production. Be sure to show your support if you dig it and follow him on twitter/soundcloud. Check out the whole EP below and download it for FREE. Definitely be apart of the conversation on twitter @coleeeee123 and in the comments.

Turn it up, let your mind drift and enjoy this. I really can’t say enough about how perfect this release is. 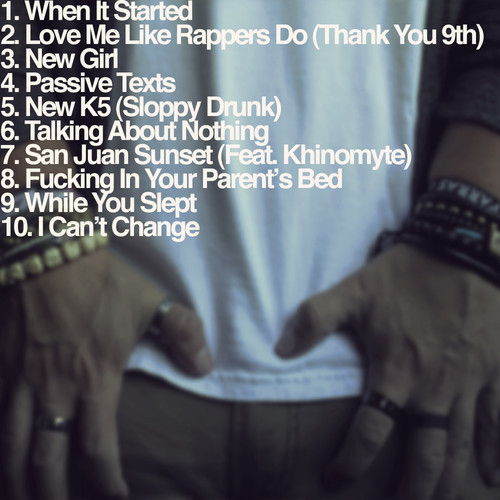