It’s the scandal of the week and many of you have been fervently talking about the rules imposed on late night DJs at a new Las Vegas club.

No trap, no dubstep, no David Guetta and certainly no Martin Garrix (the douche), the club seems hell-bent on banning anything mainstream.

Beg your pardon, that was a joke. Just like calling Martin Garrix a douche, ammiright? We were told the list wasn’t meant to taken that seriously… But it turns out if you are playing there, you should probably stick to the rules.

In a recent interview, the club laid out their reasoning behind outlawing what they see as ‘pop music’:

“…but in the EDM side of things I know over a handful of writers that write for several of these big name guys making millions. Some are nothing more than pop stars with engineering teams behind them. I’m not hating on them for reaching that point, but its no longer an artistic music. It’s now pop art, and complete garbage… We’re simply dealing with taste and a big gap in most personalities.”

Well they are more than welcome then, to drastically restrict their market. Anyone who would be a fan of this music, who see something worthwhile in it and are willing to head out and enjoy it played, must find these kind of narcissistic ramblings disheartening.

By the way, you should read the whole interview and give yourself a point for every buzz word or phrase that’s been used to death against EDM… Purists…Deeper… ‘The EDM bubble will burst!’

Oh no! Betcha didn’t think of that, did ya?

The number of people annoyed at what can be so obviously misconstrued as snobbery has risen; A-Trak has even displayed similar sentiments on his Facebook page: 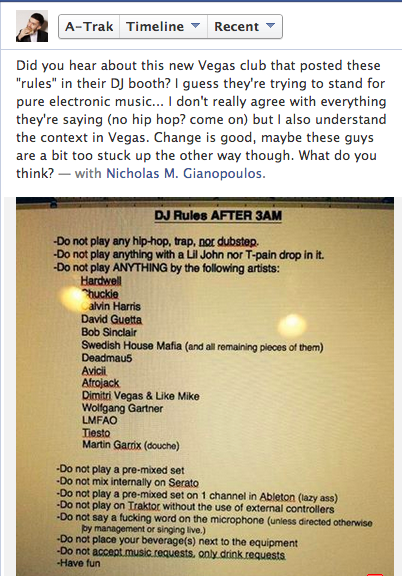 It’s difficult to understand why people can be so snooty about EDM. The ‘I heard these guys on a forum years before you’ comments and the constant plebeian implications given to certain types of music, baffles me. Who cares? At the start of LFO’s groundbreaking acid-house debut Frequencies, a distorted voice declares, “House. In the future, We hope our music will bring everyone a little closer together, Gay, straight, black or white, One nation under a groove.”

Although this kind of romantic sentiment was typical of house music at the time, it’s times like this when it’s difficult to see traces of it today. It’s as if some seem to say, “Certainly you’re all welcome here, as long as you listen to the music we want you to listen to.”

Ultimately, on this side of the Atlantic, it’s even harder to judge their true actions but I honestly imagine it’s mostly a brilliant marketing scheme in one the busiest EDM capitals of the world. Certainly, they’ve spotted a rather sweet ‘niche’ to exploit and they’re more than welcome to it. So why must we draw attention to it? Honestly, there’s other things I’d rather be writing about.

But any publicity is good publicity I suppose. Sure, look at Lindsay Lohan.

And all in all, this will be a distant memory, soon enough.