Breaking news out of Canada today, Deadmau5 and the infamous Mayor of Toronto Rob Ford have been hospitalized after sustaining injuries from a violent physical assault, which took place during the filming of a new edition of Deadmau5‘s recurring ‘Coffee Run‘ series. Below are the tweets that led to the controversial mayor and Deadmau5’s coffee run foray.

@deadmau5 The car looks great! Send an email to my Chief of Staff Dan at [email protected] he looks after the scheduling. #purrari2k14

Information is still developing, but initial details suggest that Mayor Ford and Deadmau5 were attacked by a group of enraged #TeamTiesto fans at a local Toronto Tim Horton’s. Supposedly a verbal altercation took place, with insults exchanged over the mau5keteer’s Ultra Music Festival closing set. Shortly thereafter, blows were exchanged. A spokesperson for Deadmau5 has stated that both Rob Ford and Deadmau5’s injuries were serious, including lacerations and second degree burns, but are not life threatening. However, the spokesperson added that doctors are worried that Deadmua5’s ego, which was severly broken in the attack, may never recover.

The assailants fled the scene and Toronto PD has asked that anyone with information about the assault step forward.

And here’s deadmau5 tweeting from the hospital 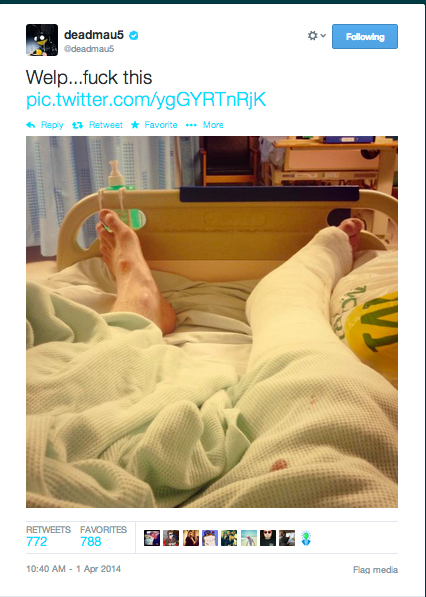 Aspire to Inspire: The Chainsmokers

Aspire to Inspire: The Chainsmokers