Less than a month ago, the world lost Francis Nicholls. Known better as Frankie Knuckles, this man played a fundamental role in bringing house music from its earliest conceptions into the ears of the Chicago nightlife and eventually into the airwaves of radios around the world. He earned a Grammy, a street named after him in Chicago, induction into the Dance Hall Of Fame, and a legacy that we continue to celebrate in every party, club, or festival we attend.

In the wake of the recent passing of Frankie Knuckles, the prolific remixer, DJ, and friend to Frankie known as David Morales recently shared a letter he received from President Barack Obama and First Lady Michelle Obama regarding the passing of his friend.  The letter, uploaded on David’s Facebook, supports David’s sentiments on how Frankie Knuckles was a “true legend”. It also extends sympathy and condolences to the family and closest friends of Mr. Nicholls. Read the letter below and our previous post reflecting on the life and times of Frankie Knuckles here. 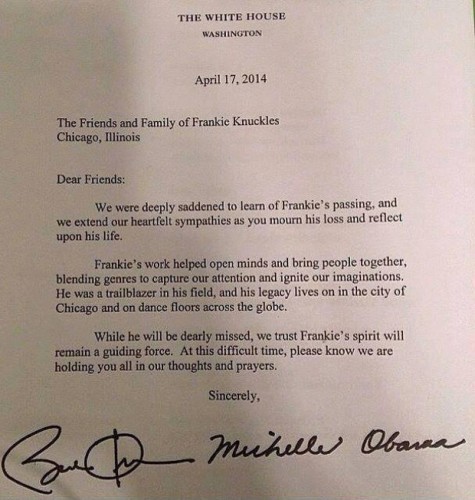