Every once in awhile, two forward thinking artists will come together and create something that turns the whole scene upside down and shatters any notion of boundaries between genres. #$ (Hash Money) has done no less with their self-titled debut EP, diving head first into the realms of wonky bass music and intelligently offensive hip-hop to create a genre-defying new blend of music that can only be described as electro bass-hop.

Comprised of GDP, a New Jersey MC with a versatile, lyrical flow, and Space Jesus, a New York based electronic music producer specializing in trippy, bass-laden electronica, #$ delivers 8 original tracks full of refreshingly quick-witted writing and spaced out, grimey beats. The two artists are long time friends and their unique styles blend seamlessly, allowing the delivery to be extremely raw while somehow also staying fun and danceable. The end result is a wild and exciting fusion of EDM and hip-hop reminiscent of Das Racist and Chance the Rapper. #$ also boasts co-production and guest features from Hot Sugar and Froyo, as well as Shape and Chippy Nonstop on the mic; even Space Jesus himself spits a couple bars!

#$ are releasing their self-titled EP via Smokers Cough, a new-wave hip-hop collective and record label based in Brooklyn, NY. The EP will be available exclusively on the label’s bandcamp as a free/name your price download until June 30th; it will still be up for grabs, but will cost $5. So, don’t sleep on this one if you’re feeling the vibes! Make sure to check out their tour dates and a wacky promo video after the jump. 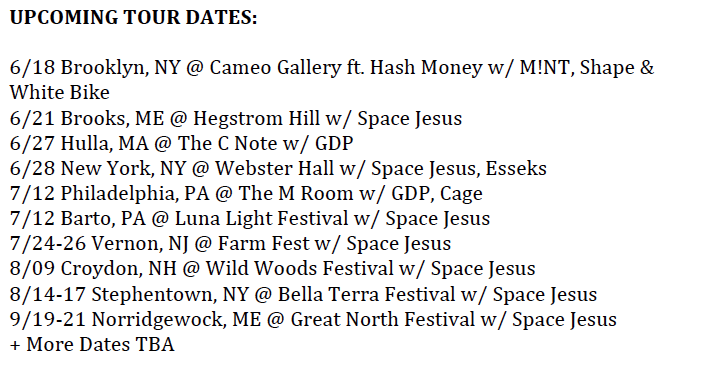 Win a Pair of Tickets and Meet and Greet with Gareth Emery at Concord Music Hall, Chicago, 06/27/14

Win a Pair of Tickets and Meet and Greet with Gareth Emery at Concord Music Hall, Chicago, 06/27/14