If I had to guess, all of us have experienced some form of discouragement in our lifetimes.  Whether that be from our parents, close friends, teachers, enemies, etc., someone has made you feel discouraged.  Usually this happens when you are doing something you love and others do not approve of your decision.  Fortunately though, we have all been blessed with the power of choice.  Luke Shay, a 23-year-old DJ/producer from Virginia Beach exemplifies how important it is to make decisions based on what you want, and not someone else.  He has had to make several leaps of faith throughout his lifetime, but he does not regret any of them because each leap has added to his current success and happiness.

Between the ages of 16-19, Luke was working at a restaurant in Virginia Beach as a full-time cook.  While this was a decent source of income, it’s not exactly what he wanted to do with his time.  Instead, he wanted to pursue music.  Not just as a hobby, but as a career.  He is passionate about music and wants to produce music that touches people and makes an impact.  He wants to produce music that is timeless.  Well, in order to accomplish this Luke needed to focus on music full-time.  This is exactly what he did.  He took a risk and quit his job as a cook to pursue his music dream.  From the money he had saved up, he began to invest into his career.  With the purchase of a mixer and turntables, he began to teach himself mixing and beat-matching. Once he learned how to DJ it was time to perform in front of a crowd so he started booking gigs at the clubs around him.

Roughly a year ago, as his DJing/producing career was progressing, it was time to make another decision. One of his now good friends, Cory Enemy (who lives in Los Angeles and was producing for a lot of big pop stars and also taught Dillon Francis how to produce) asked Luke if he’d like to move in with him and make music with him. Yet again, he took a risk and moved to the opposite side of the country to pursue his music career even further.  He quickly learned that this move was going to not only benefit him, but challenge him as well.  Since LA is such a saturated market for dance music, it is difficult for an up-and-coming producer to set himself/herself apart.  Luke felt like the little fish in a big pond and compared it to a small-town baseball player who might have been the #1 pitcher in college, but once entering the pro leagues, it could be a completely different story.  He has had to spend thousands of hours learning the production software through tutorials, trial and error, and various producer forums.

But if you have been following Luke’s career, then you know that he is certainly on his way to making a name for himself in this industry.  Not only did he win the remix contest for Adventure Club’s “Wonder”, but he was also a runner-up for Pegboard Nerds’ “Hero” and Bro Safari x UFO’s “Drama” remix contests.  In addition, this past Friday during EDC week he traveled down to Vegas to play a show with Tom Swoon and DVBBS at the new nightclub, Drai’s.  He is now being supported by a lot of big artists and is on his way to turning this dream into a reality.

Even though he has only released remixes up to this point, he has produced several originals and is beginning to shop them around at different labels.  His remixes are a reflection of his original sound and have served as a major tool for Luke to adopt a loyal following.  He wants to show critics that EDM is in fact real music and wants to bring a melodic, beautiful vibe to each of his releases.

While his music is in fact powerful, so is his personality and character.  He has been inspired by his idols who give back to their fans and wants to do just the same.  If a fan wants to meet up with him while they are in LA or while he is in their hometown, then he wants to grab lunch or dinner with them and get to know them on a more personal level.  In addition, he is inspired by those who are coming together for this music because it becomes a family and evolves into a movement.  His passion in life is evident and it has helped him to do what he loves and has given him a purpose.

That being said, Luke wants to share with you some advice that has helped encourage him to take leaps of faith and to enjoy his life and career as a musician.

2) Everyone receives rejection…you can’t let it get to you. 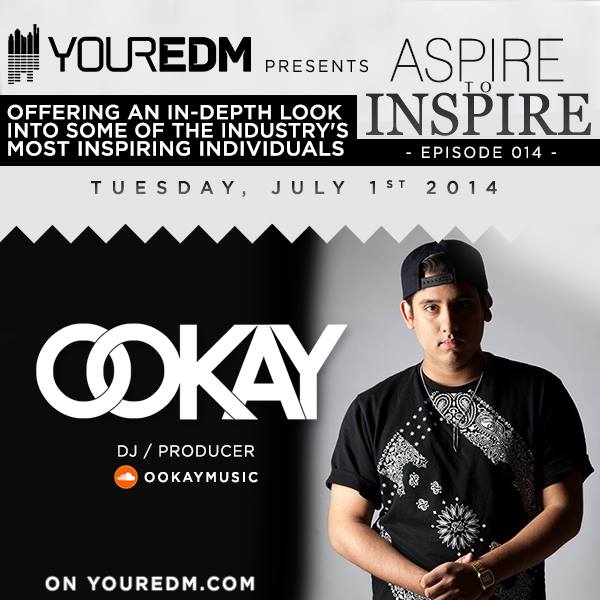 Gina Star Will Get Your Blood Pumping With “DNA” [Free Download]

Feed Me Announces Support for his Psychedelic Journey Tour

Feed Me Announces Support for his Psychedelic Journey Tour