Slander On Success, Heaven Trap, And The Future [Your EDM Interview]

From Nevada to California to Texas, the second leg of Slander’s tour has kept them on the move.  Consisting of Derek Andersen and Scott Land, the LA duo has been exploding onto the scene.  With their sights aimed high and oozing with talent, these two have been earning the support of some of the biggest names in the game.  And for good reason – Slander has been busy niching out their own genre and throwing sets unlike any other, chock full of their signature “heaven trap” remixes.

Slander touched down in Chicago on Friday to spin for a packed Sound Bar, and we caught up with them before their show to see how the tour has been treating them so far:

Derek: Every single show has been overwhelming.  We’ve never been to all these places.  It’s crazy that we have fans that make us Slander kandi and stuff in the middle of Texas.  It’s just nuts.

Scott: Even though Slander started in 2010, we were DJs.  We didn’t start producing until a little less than 2 years ago.  We’re seeing all of that come together for us pretty recently.  It’s been a blessing.

Their tour will bring them to stages across the entire country, including an invite to the second annual TomorrowWorld.  Some of this success can be attributed to their unique flavor of production, dubbed “heaven trap.”  Artists such as Carnage have played their tunes to massive crowds, and Candyland just released a track that fits into this style like a glove.  Clearly, they’ve hit a chord with the electronic community.

Derek: [When we] made the Above and Beyond remix I knew it wasn’t really anything we’d done before.  A&B has, in my opinion, the most dedicated fanbase in EDM.  We want our fans to be like that.

Scott: The thing with heaven trap is that the music resonates with people so strongly.

Derek: We gave it that name because it’s a synonym for euphoria.  We want to make people cry at the trap show.  In our sets we play all the heaven trap at the end, so people leave the show with a warm, uplifting feeling. 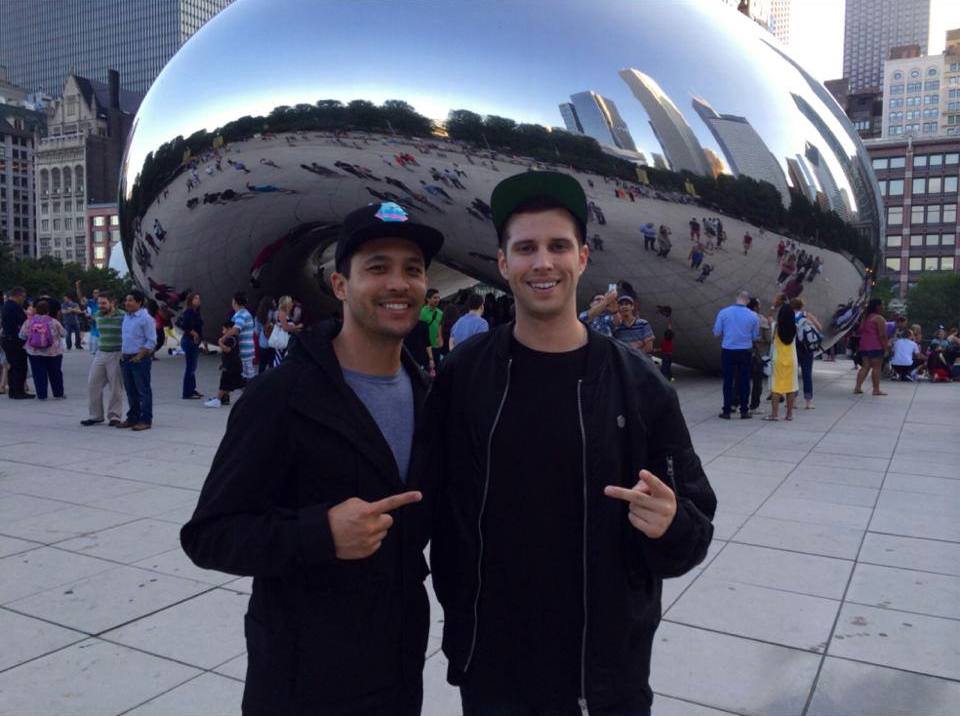 Being able to differentiate yourself is important in EDM, with so much new music coming out every single day.  They’ve made this genre their own, and will be releasing their edit of Audien’s popular “Pompeii” remix this Tuesday.  But Slander isn’t ready to pigeonhole themselves any time soon.  They have lots of originals in the works, and much of it isn’t trap at all.  Both Derek and Scott come from trance backgrounds, so it was only natural that this, combined with their mutual love for hip hop, would lead to a diverse style.  On the future:

Scott: We’ve been working on originals constantly.  It’s not all edits.  We’re going to depart from trap with a couple songs and see what people think.  We made a bunch of house records – cross[ing] over is something we want to do.

Derek: It’s so important to just kill it the first time you go to any city.  If you don’t kill it, no one’s going to come back to that second show.

In addition to their tour stops (including a special TBA show on 9/6 in Southern California) and upcoming original tracks, they hope to support other artists who are trying to build the sound they pioneered.

Scott: We have a plan, [but] we can’t really say anything right now.  We want to play main stage at EDC, so we’re going to do whatever it takes to get there.

The future is bright for Slander.  They possess a deadly combination of skill and diversity while remaining humble and dedicated.  Those who have seen them perform live can attest to their potential to take over.  At the rate they are going, main stage EDC will only be the beginning of their story.

Check out Slander’s tour dates to see when the duo is performing close to your city, and follow the links below to keep up to date on future music and news!

Your EDM Exclusive Interview with OVERWERK: On Exist, Musical Growth, and Going Beyond the Comfort Zone

Chicago native and bass enthusiast. I love a wide variety of electronic music, and nothing makes me happier than finding original sounds. I believe that music is the audible interpretation of emotion. Hit me up: [email protected]