After much confusion and outrage the past few days from festival-goers, it seems the website rings true: Electric Zoo 2014 is banning CamelBaks.

Although the information included with purchased wristbands says that empty water bottles, CamelBaks, and reusable bottles were permitted, EZoo came out on social media today to confirm their new decision, as well as their reasons behind it. 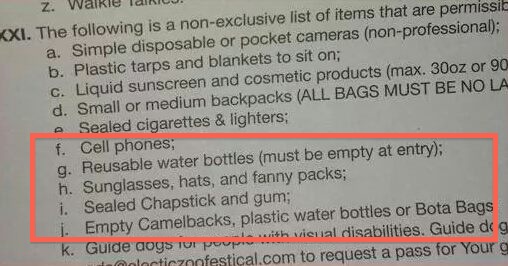 In lieu of allowing CamelBaks, Electric Zoo will be providing free cups at all water stations for thirsty ravers, and will allow bottles purchased at the event to also be filled. Their reasoning is simple: people utilize CamelBaks to sneak in illicit substances into events.

Angry, upset, and generally frightened festival goers took to the status update to share their thoughts on this newly implemented rule.

While it is important to offer free water at a festival, the banning of empty CamelBaks and reusable water bottles seems extremely unsafe. Unless the cup they are offering has the same capacity to hold water as a CamelBak and comes with a lid, I highly doubt this will be an effective method against danger, dehydration, and death.
Whether or not people are consuming illicit substances becomes irrelevant at this point – even the soberest of fans need to make sure they are drinking enough water to remain hydrated while dancing for 3 days under the hot New York summer sun. It is unreasonable to think that fans will leave an amazing spot in the midst of a crowd during a set to go grab a “cup of water” from one of the water stations. It is even more unreasonable to think that a few cups of water per person throughout the festival will suffice to avoid dehydration.

It becomes hard for young partiers to prioritize hydrating when hydrating becomes a difficult and rather annoying task. Allowing fans to fill up a CamelBak twice during the duration of a day is a much more approachable way to support safety and hydration than supplying cups. The cups in addition to allowing empty CamelBaks would have been a nice way to ensure safety for all, but cups instead of them just does not make sense.

While I can only hope EZoo will take into consideration your requests, tweets, comments, and this petition asking to lift the ban, for now you must prepare to live 3 days of a festival sans CamelBak.
I urge you Zoo animals to stay safe during Labor Day weekend; please remember to hydrate even with how annoying and difficult it may be.

Datsik, Flinch, and Antiserum at EXLA

Datsik, Flinch, and Antiserum at EXLA