HARD Day of the Dead: The Most Fun You’ll Ever Have For Halloween

For the past three HARD events, the venue has been different. The original festival grounds, LA State Historic Park, are undergoing renovation and so this year’s HARD Summer and HARD Day of the Dead have had to find new (hopefully temporary) homes. While this might signal distress for some ventures, HARD DOTD was thriving more than ever.

The morning of Saturday, November 1st was dreary, to say the least. The skies were gloomy and foreboding, and a slight drizzle was beginning to form on my windshield. As I arrived early at the Fairplex, I was ushered toward a still-vacant lot where I had my choice of parking spots. I settled in, making sure I had everything I needed for the long day ahead — I decided that taking a sweater was a good idea. I was right. But even the cold couldn’t stop 40,000 attendees from attending the first day. With headliners like Diplo, Deadmau5 b2b Eric Prydz and Knife Party, who can blame them?

Getting into the festival was comparable to any other event. The security line that you happen to be in always takes the longest. As I reached the front, I was worried that my “YourEDM” kandi, the only piece I own and wear, would be stripped from my wrist and tossed in the trash bin directly in front of me. The security officer was kind and asked if I had any favorite producers performing that day, and after a thorough search, I was let on my way, kandi still gently rustling the hairs on my arm. I looked back as the girl in the line next to me had hers thrown away, and cursed the inconsistency. Alas, I was inside and my adventure was only starting. 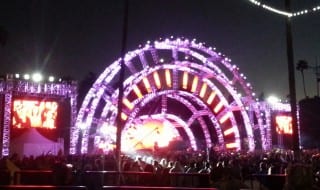 The first day had me running from stage to stage. The entire day, I was only able to see one full set. The rest of the time, I was running around the enclosure attempting to fit as much music in as possible. The day’s attractions varied wildly, from the lovestep-producer Australian Just A Gent to the mysterious ZHU. In fact, I was able to catch up with Just A Gent after his set and ask him some questions. But first I had to find the press/media tent, and no one knew where it was. Even my contact who was there could only tell me two reference locations, which led me essentially to a dead end. I eventually found it after 20 minutes of searching, during which time I could still hear the raucous cheers and loud thumps coming from the main stage as Loudpvck were playing.

The next eight hours were spent seeing nine different DJs and interacting with other attendees. The thing about HARD that you have to understand is that it isn’t like an Insomniac festival or even really like a traditional music festival. There isn’t any art — there are rides — but the focus is solely on the music and the stage presentation. Someone next to me in line to get press credentials was asking how it compared to Insomniac: Escape from Wonderland, which was the same weekend. The best answer I heard was, “A little less whimsy, a lot more down to earth and gritty.” Which is very true… HARD has a history of finding grassy and dirty venues. This summer’s Whittier Narrows is no exception; even with shoes and socks, my toes still wound up getting dirty. It remains a mystery.

Regardless, the ending to my first day at DOTD was met with a decision: Deadmau5 vs Eric Prydz or Odesza. I’m not a huge fan of either of their styles of live music, but Deadmau5 vs Eric Prydz is something rarely seen and so it made a strong case for itself. Odesza, on the other hand, crafted what I consider to the best album of the year. Rather than notoriety, I was more focused on their talent. In the end, Deadmau5 vs Eric Prydz began an hour before Odesza and so I saw both. Friends later regaled me of tales of their set after the point I had left, but I didn’t really care.

Odesza’s set was the first time I set foot 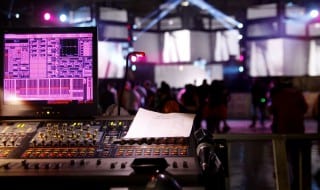 in the 7-Up stage, the Green stage, at DOTD. Immediately I was taken aback by the setting. First, there was a raised platform to my left. Upon it were pretty ladies handing out free cups of 7-Up. To be quite honest, I have never felt more refreshed. (I swear to God, 7-Up is not paying me.) The second thing to catch my interest was the visual set up behind the DJ booth. It took me a while to recognize what was actually going on, but when I figured it out I was astonished at the incredible sight it could produce. The stage was half-LED paneling and half-projection mapped, designed by V Squared Labs. So there were electronic panels contrasting with projections on canvas. It seems relatively simple, but it really created a wonderful effect.

I left Odesza’s set a little early to beat the crowd to the parking lot. That turned out to be a great idea, as I was told the next day by a friend who left 10 minutes after me that he spent 45 minutes getting out of the lot. I was out in 10. As I was walking out of the gates, and past the HARDer stage where Deadmau5 and Eric Prydz were on the last legs of their set, “Strobe” was playing. It seemed a grand enough farewell after being on my feet for nearly twelve hours to be walking away as such an esteemed and wondrous song played me out. I felt refreshed, though my feet hurt terribly, and looked forward to the next day, featuring even more talent that I hadn’t seen before.

The morning of Sunday, November 2nd was much clearer than the day before. I was gearing up for Thomas Jack’s set later in the day and was ready to don my particularly tropical outfit – a Hawaiian button-down polo paired with seafoam-green shorts that cut off above the knee. I thought better of it and wore pants… but kept the shirt. The drive there was relatively painless, but arriving just an hour later than the previous day would present itself with a different challenge — much longer lines. Luckily, I had my media wristband and was ushered toward the VIP line where I was able to get through in a matter of minutes.

First up on the agenda was Valentino Khan. He was the focal point of the DOTD trailer; or rather, his mustache was. His set consisted of a variety of genres and he was doing well enough on stage before he announced that “This is my final track.” I look up and see the large mustache from the video run out on stage, in front of the DJ booth, and Valentino shows up on the large monitors to the sides of the stage looking rather nervous. After a brief countdown, Valentino Khan’s mustache is shaved off right on stage.

The rest of the day played itself out much like the first, although I could spend a little more time at each stage. I wish I could have spent more time at Big Gigantic, but Galantis was playing soon after and I was pulled by friends to go along. Galantis’ set was stunning, to say the least, watching the HARDer stage light up spectacularly in front of a setting sun. But soon it was time to see the man for whom I had nearly worn an embarrassing pair of shorts, Thomas Jack. The sole representative of tropical house at HARD laid down an interesting mix blend of tracks that kept the crowd slowly grooving along for a solid hour. I was delighted that I could say that “I have seen Thomas Jack.” 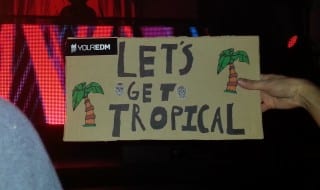 The end of the night was much less hectic than the first, and it was quite clear where I would be staying for the remainder of my time at the Fairplex: Zeds Dead, followed by Bassnectar. As a basshead, Zedd and Calvin Harris didn’t even tempt me. I had seen Zeds Dead four times previously, the past two at the previous two DOTD festivals, so I knew what to expect. This was my first time seeing Bassnectar, however, and I knew that I had to experience it. While Zeds Dead delivered what I consider to be the best set of the weekend, I was left a little underwhelmed by Bassnectar. Perhaps it was the hype surrounding the name, or perhaps he was just having an off-night, but Lorin could not best the Canadian wonder duo.

I left the festival feeling raw and tired. My feet were swollen and throbbing, my cheap H&M shoes doing little to provide much-needed support. I drove home blaring System Of A Down from my speakers to keep me awake, already envisioning and planning in my mind what I would write. Would I speak of the mystery behind the producer ZHU, whose debut American festival set reveled in pageantry; or should I speak of Moody Good, whose HARD debut and unique brand of bass music left the crowd speechless? Certainly, I should mention the various DJs I saw, but how to fit them in? I’ll give you the abridged details below.

Best set of the weekend: Zeds Dead. Hands down the most stylistically diverse and well-crafted set of both days, with genuine crowd interaction and a signature sound that everyone there was waiting for. Other notable sets were Seven Lions, who brought out Kerli to sing “Worlds Apart” live; Snails, whose unique vomit step left the crowd at the Purple stage gasping for air; and Tchami, whose set was more than just deep house, but an eclectic blend of hard electro and more commercial beats.

Blue balls of the weekend: Gesaffelstein. The mystery producer first crossed-out on the HARD lineup announcement played a substantially infuriating set replete with elongated build-ups and hard electro drops. I left feeling let down, and unimpressed.

Surprise set of the weekend: Alesia. I had never heard their music nor their name. Their early set time of 3:50 on the HARDer stage spoke to their relative novelty in the scene, and yet their set was well-mixed, had a good variety of tracks, and had the crowd engaged and dancing.

Most memorable event of the weekend: Valentino Khan. Come on… shaving off your signature mustache at a major US festival? It screamed media stunt, but it cost more than just advertising money, if you catch my drift.

A Look Back At: ‘Footprints’ by Style Of Eye

A Look Back At: 'Footprints' by Style Of Eye