As you may know his last single “Wild Youth” was put out by Columbia Records (Sony) months ago, but Steve Angello has decided to release his first full-length LP from his own label Size Records. The exact reason for the turn away from Columbia is unknown.

Just recently one very lucky Steve Angello fan got the answer to the entire EDM blogosphere’s question following this parting of ways: “When will you release your debut album?” Via a tweet the Size Records superstar answered “April.” 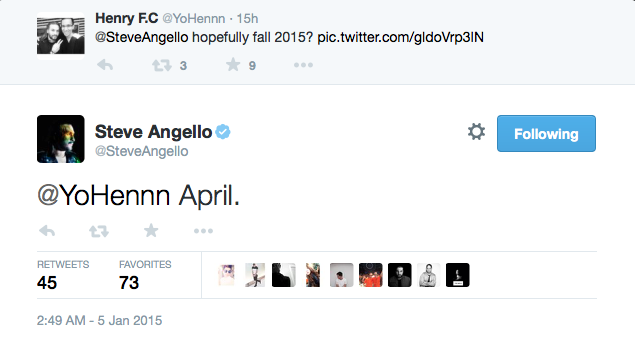 No official announcement has been made yet, but we speculate the Wild Youth LP will contain all of the unreleased but well known records such as “Children Of The Wild (ft. Mako)”, “Prisoner (feat. Gary Go)”, “Sentido (ft. Dimitri Vegas & Like Mike)” and “Enough For You (ft.  Imagine Dragons)”. The real excitement lays in the secrets we will have to wait until April to discover.