Japan and EDM: The Boom is Imminent [Editorial]

by KSpence
in Editorial, EDM News

If you ask a young American fan when they started listening to EDM, the answers vary. For some, their parents and older siblings were into 90s house. Others used the radio as a gateway, latching onto European pop stars who broke into the US market in the early 2000s. But there’s a faction of kids who didn’t even realize they were into electronic music until they rediscovered it during the EDM explosion five years ago; those who spent hours playing DDR. The seeds of modern day dance music have been in Japan forever, starting in anime and video games which are still dominant in today’s culture. The rest of the world’s version of EDM – trance, big room house, dubstep – is still in its infancy.

So how did Japan seemingly go untouched? As one of the most technologically advanced cultures, it would make sense for EDM to be popular there, as Bemani’s Dance Dance Revolution franchise is one of the best selling series of all time. Even Australia, with its geological isolation, has still managed to produce a high percentage of today’s biggest acts. Answer: the government.

Up until 2014, there was actually a law prohibiting dancing in Japan. Known as fueiho, clubs needed a license in order for patrons to dance. Dance floors had to be relatively tiny in size, and most importantly, business allowing dancing couldn’t stay open past midnight or 1am.

According to Time Out Japan, the law is part of an archaic set of restrictions in place since the 1920s. It wasn’t really enforced until after World War II, as a way to limit prostitution. Clubs back then provided an easy cover for American soldiers to pick up women instead of visiting brothels. Over the course of 60 years, enforcement of fueiho took a back seat, with many clubs overtly breaking the law and allowing dancing. In fact, Japan has been heralded for its underground club scene: Tokyo’s ageHa Nightclub is the largest in the city, with the ability to hold 5000+ people nightly. But after a brawl resulted in the death of a young man outside a club in Osaka, police crackdowns resurfaced. 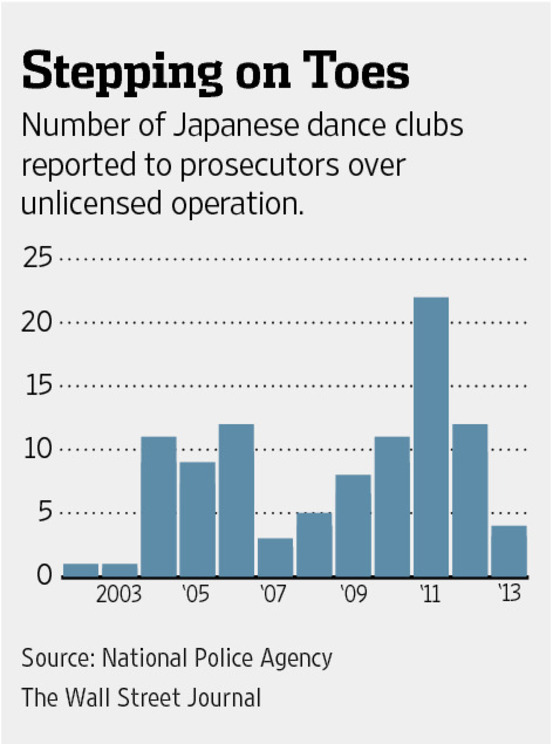 Throughout the rest of the world, this was the start of the EDM explosion. Nightclubs and festivals popped up in every major city as electro house, trance, and dubstep took center stage. But fueiho refused to budge. Things were so strict that the word “dance” couldn’t be used in club promos, so you could see how the term Electronic Dance Music wasn’t able to permeate Japanese nightlife. For four years “dance lawyers” relentlessly petitioned to lift the ban, as more and more nightlife figureheads were fined and arrested for their illegal practices. The slow process was due in part to Japan’s concern for the morality of its teens. As far as they know, the Western scene is plagued by rampant drug usage, which for moral Japan is a serious issue. To them, EDM is Pandora’s Box, a potential gateway to corrupting future generations.

With all things considered, Japan’s cabinet finally approved changes to the law in October 2014, though Reuters speculates their decision was heavily based on the imminent influx of tourists from now until the 2020 Summer Olympic Games in Tokyo. Regardless of the reason, Japan can finally operate out of the shadows and fully embrace dance music.

Even without the fueiho, EDM’s explosion in Japan won’t be overnight for many reasons. The first is current Japanese popular culture. Asia’s J-pop (Japanese pop) and K-pop (Korean pop) crazes don’t seem to be going away any time soon. These styles draw heavy on pop and RnB/Hip-hop, leaving little room for anything else. The genre is also defined as being incredibly bright and upbeat, and as my sister would say, EDM just sounds too “aggressive” at times. Still, dubstep is slowly sneaking its way into dance breaks of K-Pop’s biggest tunes, but it might be awhile until electro-house or techno finds a home there.

Also troublesome is the amount of domestic talent, creating a very weak foundation for dance music. There are some DJs who have emerged, but none that have been signed by major labels or had a steady release of singles on the Beatport charts. And where other countries have 3-4 major record labels in every city, the country just launched its first pure label EDMF in 2013. Dance music’s ascent into mainstream culture has been so slow there, Warner Bros. had to launch a compilation entitled “What’s EDM?”

Clubs are still enjoying open-format and with the exception of a handful of places, EDM-centric nightclubs aren’t bringing in business night after night like their competitors. Though that’s not to say dance music has been a complete fail. The number of top tier DJs performing in Japan have grown over the past few years. Artists like Kaskade and Armin Van Buuren have fan bases there, but mid-level and emerging DJs have no support. Unfortunately, Japan’s stunted growth might also stem from the fact that travel costs and isolation make it near-impossible for European and American DJs to simply fly to Osaka or Tokyo for just a night or two. The trip has to lineup with extensive tour schedules, and for a busy DJ, a long trip to Japan has serious drawbacks.

For EDM to succeed in Japan, its fate lies in festivals. Thankfully, the numbers look promising: The first festival Electrox was held exactly a year ago in January 2014 for 10,000 fans. While that’s probably the same size of the smallest stage at EDC Las Vegas, it’s an impressive first outing for a culture who at that point still had a ban on dancing. A few months later, the inaugural Ultra: Japan brought in 42,000 people, making it the largest dance music gathering in the country. It was so popular that highlights of the festival were aired on Japanese national television. This year, Made Event is also getting into the mix, with Electric Zoo: Tokyo Beach hitting Makuhari Beach on May 6.

With major strides in public acceptance and the rise of festivals, it’s only a matter of time before the country enjoys the same boom that the rest of the world experienced half a decade ago. As all eyes begin to turn to Japan, it will interesting to see if and how they can successfully fend off drug culture, as it has plagued every other country EDM has been successful in. But no matter what happens, one thing is for certain: the gap between Japan and EDM is closing.