As expected from someone of his stature, Kaskade is all over the place lately. The legendary DJ/producer made headlines a few days ago when it was announced that he would be signing a new contract with Warner Brothers and just yesterday, he took to Reddit for a very extensive AMA (Ask Me Anything) session. Over the span of two hours, Kaskade answered as many questions as possible from his fans and followers; his relaxed, intelligent character made for some truly interesting (and occasionally clever) responses and it was clear he was happy to be interacting with his supporters.

And his fans were stoked to be interacting with him! Especially those that shared his Utah roots; one user from Salt Lake City in particular hopped onto the thread to praise him for both his music and the work he put into the SLC dance music scene years ago. He was also curious as to how growing up in a strict LDS (Latter-day Saints) community had affected his early days of making music; Ryan (Kaskade) replied that he had always had the full support of his friends and family and he attributes where he is today to the people that both helped and gave him room to grow.

Others were curious about his opinion on the ‘future/deep/ghetto house’ movement that gained so much steam last year, to which he had a short but extremely real reply:

It’s cool. Electronic music continues to change and flourish, it doesn’t matter what you call it.

I carry and SD card on it with about 2000 songs so I can go wherever I would like to go. But for BIG shows like that one in Denver (Decadence NYE) I have the first few tracks sorted out in my mind. I will pull from a playlist that has about 30 tracks in it that I think will work that night and just go with it.

Inevitably, the topic of dance music’s future was brought up. Ryan’s opinion was that we would stop calling it EDM at some point and, naturally, it would continue to grow and evolve. He thinks we won’t even recognize it when it’s evolved past a certain point; whether that’s a good or bad thing, he couldn’t say.

Also in the ‘inevitable’ category were questions about his deal with Warner Brothers. Many of these went unanswered, but one user was curious as to whether or not it would affect Ryan’s goals with his own label, Arkade, and that garnered a response:

I  made Arkade to bring attention to young/new talent. To help give artists that I love an outlet to put music out. The deal that I made with Warner does not affect how I will go about running Arkade. If anything it gives my label more impact.

And finally, the most important question surrounding the man, the legend that is Kaskade: just how much does he like cereal?

I love cereal so much that I would eat it every meal if I could. I am sad that this is not possible. I pray for a day that this will be my reality.

For those wondering about a deadmau5 and Kaskade collaboration: 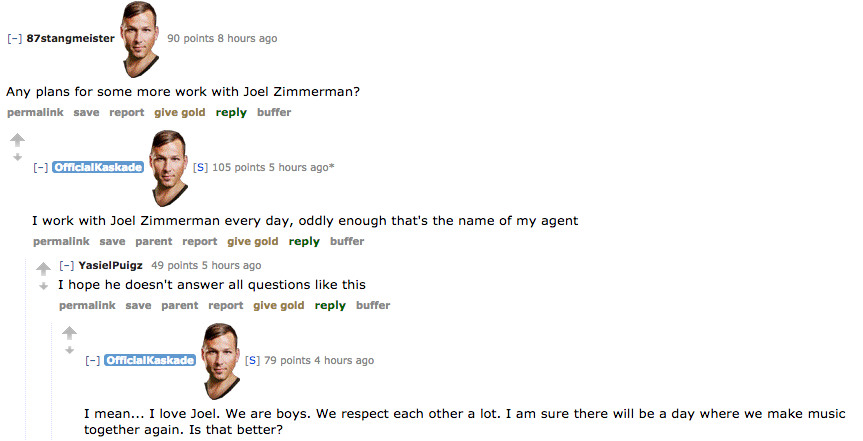 We thought these were some of the highlights from the AMA, but make sure to check out the full session here for any shenanigans we may have missed!