In a world where new producers pop up by the minute, legacy is everything. Making a name for yourself and ensuring that millions of people remember who you are when you’re gone should be the aspiration of every great musician.

The “Legacy Project” is GQ’s way of highlighting musicians and entertainers who have made waves in the past twelve months. On the list are artists like Stevie Wonder and Nas, legends in their respective genres. Also included are newcomers like ILOVEMACKONNEN and YOUNG THUG. Among all the musicians listed, though, is our very own Diplo.

As head of the Mad Decent label and figurehead and headliner of the accompanying Mad Decent Block Party, as well as a collaborator with bass don Skrillex in Jack U, Diplo has certainly proven himself this year to be a monumental figure within EDM itself and in music culture in general. He’s credited with productions on many of the top pop star’s tracks, including Britney Spears, Usher and Chris Brown and will release new Major Lazer material this year, as well.

The music world is still the most innovative, energizing, and eclectic slice of the American-pop-culture pie. But what artists should a man actually be listening to right now? And who will we still be listening to ten, twenty, and even fifty years from now? As the 2015 Grammys approach, we take a look at the music makers who, this year, left something lasting behind. 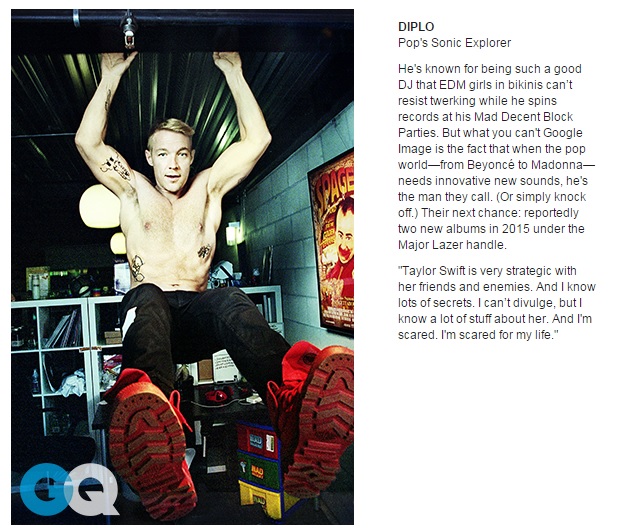 Also on the list is lesser known producer, but no less important, James Blake.

Take a look at the whole list on GQ.