Tropical house has taken/is taking/continues to take the electronic music sphere by storm. While sounds like big room and deep house are somewhat waning in popularity (deep house is still going strong, though), tropical house finds itself as the new kid on the block. Dozens of producers have answered the call to produce the newer genre, such as Thomas Jack, Kygo, Bakermat, Sam Feldt, Klingande, Robin Schulz, and Deep Chills. Even artists like Hotel Garuda and Manila Killa who are more known for their “future” thinking productions have been known to produce with a tropical persuasion.

One very popular name you might have noticed was missing from the short list above is Matoma. The 23-year old Norwegian producer has a slew of remixes under his belt, and a couple originals too.

His remix of Notorious B.I.G.’s “Old Thing Back” is a throwback to the old days. Even though it was put up on SoundCloud nearly 10 months ago, it’s only just now getting an official release via Big Beat Records. Somehow, the tropical sound melded with the rap quite nicely and produced this little gem.

So where did the idea to make a bootleg/remix of “Old Thing Back” come from?

Everything started when I first did the remix of Wild Wild West by Will Smith. I had some Tropical/Nu-disco sketches on my computer but it felt that something was missing. I had a friend over for dinner and I showed him one of the sketches, he said: “I know what you are missing Tom. Some really uplifting ’90s rap vocals. I started thinking and after a few minutes I totally agreed with his statement. I therefore started searching on the internet for acapellas. I found Will Smith’s acapella and put that into the track, it fit perfectly! I got the taste of remixing classics hip hop tracks and The Notorious B.I.G has always been my biggest inspiration. After searching on the internet for a while I found an acapella folder with some of his tracks and that is how it all started.

There’s a lot of room for rap/hip hop in EDM, but I’ve never seen it in tropical house. Could you comment on that?

I do not think all rap/hip hop vocals fits on tropical and Nu-Disco music, but Old School Hip Hop with that off-beat swing tempo is perfect for the new genre that is blowing up.
This is because tropical and Nu-disco also is produced in swing and therefore it fit. The combination makes it fresh and uplifting. Something I notice when I playing at clubs worldwide (everyone is dancing and having a great time).

Trop house is the new “hot” thing following deep house, if you keep up with that kind of thing. Does it have the staying power to remain in the spotlight?

I think the genre Trop House is very hot in the moment, but I also think that the genre will devolve in its sound design.
That being said I really love that tropical feeling, and I always enjoy chill out music and the beach, so I hope it will remain in the spotlight.

So many trop house artists make use of live instrumentals in their sets – is it a way to be more intimate with the music, or to engage the audience more?

Live instruments are a powerful tool to get the show feel more intimate, but I think you have to be smart in how you are using live instruments.
If the artist for example is not playing instruments and are just dj’ing I think the main focus can be drawn away from him.
But it’s all based on timing and how much you are using the instruments. I love performing live so in the future I hope to do more of that!

More than any other genre, tropical house is really accurately named. It conjures this image of laying in a hammock in the Bahamas, sipping on a Mai Tai or a Bahama Mama. In what tropical nation would you most love to play a set?

I would love to play in Ibiza or in Hawaii, that would be AMAZING. I am playing Ultra Music Festival in Miami this year, think that also will be really tropical 🙂

Similarly, what do you think is the optimal setting to create/produce tropical house? Bedroom, studio or other?

I think it is all about the artist’s comfort zone. My inspiration always comes to me during the evening and after listening to music during the day. I get a lot of inspiration when the weather is nice since I have a great view of Trondheim from my studio. I usually brew myself a cup of coffee and these things in combination gets me in the “zone”. Some of my best tracks have been produced under this circumstances.

What made you want to start making tropical house in the first place?

I was at a pre-party before a Calvin Harris show and some guy put on some deep, nu-disco and tropical music. I really liked it and was just blown away by the feeling and the mood it got me in.
When I got back home after the concert with Calvin I started doing some sketches and I really loved producing tropical.

What were some of your early influences, and do you still carry those with you today?

My influences over the years include, amongst others –

Matoma is currently on his Midnight Sun tour. Catch him at a city near you. 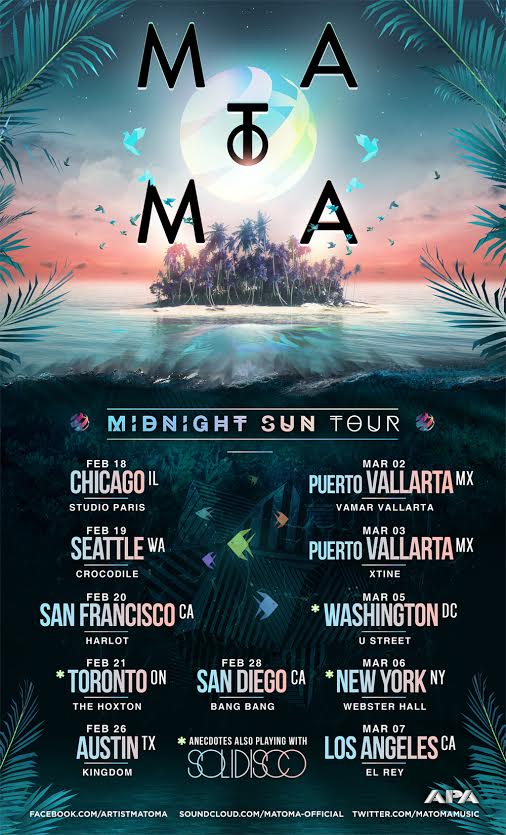