To See Or Be Seen: How Even Skrillex and Diplo Failed To Get Us Off Our Phones

With the birth of new festivals, dance music-exclusive clubs, and surprise shows popping up all over the country, it’s safe to say that this is one of the most exciting periods in EDM’s history. As events continue to sell out at quicker and quicker rates, while the popularity and awareness of such events increase simultaneously, they have started to naturally absorb a reputation of exclusivity whether or not it was the artists’ intention. This is especially the case with DJs, as each set and combination of supporting acts change on a daily basis, making every show a completely unique experience and opportunity to hear tracks never before played out to a live audience.

It is because of this that certain performances organically offer a “coolness” factor to the lucky attendees who get to witness it. Simply put: they have been granted an opportunity to see a show that many others wish to be at, but cannot be. One such performance that has dominated the news this week was Jack Ü‘s live stream. Billboard phrased it best in their recent op-ed piece on cellphone usage at live events, when they stated that the “L.A. crowd. . .seemed to value the idea of [their] presence more than actually being present.” While this “coolness” factor was going to be associated with those involved regardless, there are two ways of participating in such a show that clearly portray one’s priorities in relation to the music. The first way is the obvious one: go for the music. If the event in question is as exclusive as people think it is, the reason is usually based on the artists that show up to play. To hear a very rare set from some of the top DJs in the world is to witness the best of the best. Very often, shows such as these will feature loads of unreleased tracks, special B2Bs, and a personal and all-inclusive atmosphere that differs from the kind of performances you’d see at the bigger venues. To music lovers like us, it’s heaven.

The other way of experiencing these shows, and one that is all too common nowadays, is indirectly viewing them through the lens of your iPhone. To these people, the event itself has almost nothing to do with their excitement of being there, but rather the simple fact that they are in attendance while others are not. To paint a metaphor: it’s as if one student in the cafeteria receives a huge piece of cake for dessert, while the rest of the class looks on in envy. This student then parades around the lunchroom showing people the cake and commenting on her luck and blessedness that she was able to get a slice, but never once picks up the fork to take a bite. To attend such exclusive shows and focus only on Snapchat and Instagram throughout, is to deny your classmates cake without ever intending on eating it yourself.

Supergroup Jack Ü‘s extremely talked-about live stream, which had the potential to be a conflict-free display of the fun-loving nature of the scene, instead proved to be an embarrassing and at times unbelievable example of this above-mentioned attitude. For nearly the entire first half of their planned 24-hour stream, the attendees were seen standing on the perimeters of the dance floor, hardly interacting with one another, and on their cell phones nine times out of ten. What started as a few stray comments on the live stream’s chat window eventually turned into a nonstop observatory rant by nearly everyone watching from home about the nature of the guests. Once Skrillex and Diplo began throwing down never-before-heard Jack Ü tracks, it was assumed the atmosphere would lighten up and become an actual party. This was not at all the case, however, as even more phones shot into the air. Diplo became rightfully angry at several points, telling the crowd, 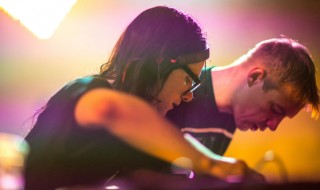 Later on, when Skrillex began playing Baauer’s “Harlem Shake”, he asked the crowd to join him in doing the classic dance routine associated with the song, hoping to hype them up and change the energy of the room. After three agonizing attempts, with virtually no response from the people standing three feet from him, he gave up. I’ll repeat that: SKRILLEX GAVE UP.

What these people failed to understand is that there is an etiquette to using phones at live events, one that holds true even outside of the music scene. The main factor is the size of the venue. No matter who is performing, less space in the room necessarily means more awareness of each individual present. If you find yourself in a room of 10 people, you will naturally have a much clearer understanding of those people’s actions and moods than in a room of 10,000. This holds true especially for DJs, who must read and analyze the crowd constantly as part of their ability to play a satisfying set. If these small groups of people all appear to be on their phones, whether filming the performer, taking pictures, or otherwise, it affects the entire group and the event itself. The DJs will be distracted, the crowd will be focused on themselves rather than the music, and the people actually trying to listen will have their own experience tarnished as a result of the chaos.

Instead of distancing oneself from the music at a live event like Jack Ü’s, and using the time as a means for gathering Twitter fame and a “dope” Snapchat story, I use this piece as a simple plea to put down your phones, respect the artists and other attendees, and truly try to experience the moment to its fullest. The best and most memorable events, regardless of size or genre, are when a community of likeminded fans come together to feed off the energy of the performer and of each other. This lack of mutual appreciation for the art is what brought unneeded controversy to an event that should have been solely about the music that was played and vibe that was created. In a genre like EDM, where every trend and song move so quickly in and out of the track lists, the primary focus should always be contributing to and basking in the present moment. Especially during a show like Jack Ü’s, it’s the only moment that matters.

Beatport Streaming Service Could Be Big

Beatport Streaming Service Could Be Big