The first time I rolled was at Coachella in 2010. As I remember, it was a green Pokeball – a quadstack. I had taken it to celebrate not only my first Coachella, but the first time I would be seeing one of my favorite groups at the time, and still, Infected Mushroom. (Would have made more sense to take shrooms, I suppose, but whatever.)

As the roll began, I felt a surge of energy and a desire to move around, feeling as if I would never get tired. Soon enough, the Coachella midday heat got to me and I went to go nap in my friend’s car (something you should never do, but no one told me that). I woke up a couple hours later, still rolling, and finished the day with the Gorillaz, still feeling the effects of the pill as I went home.

It was really only years later that I came to the conclusion that what I had taken probably wasn’t ecstasy, but some concoction of (only maybe) MDMA and probably speed.

Ecstasy, as a term, is essentially useless. As is molly. Both represent a specific drug that has virtually nothing to do with what people are actually taking. It’s marketing to the masses, and it works. Every year, dozens of adolescents and adults die, and more end up in emergency rooms, for taking false substances that they believed was MDMA – and no one is bothering to tell them any different. Instead, the media equates the substances, perpetuating the cycle of drug fear and intolerance.

However, online sources are working to prevent needless deaths. Sites like PillReports and EcstasyData are working with users to provide accurate data and effects on specific batches of pills in order to promote awareness and harm reduction.

“Project Know, an organization aimed at exploring substance abuse and providing resources and information on its effects, has just published a report examining the common contents of ecstasy. The report gathered analyses of more than 25,000 samples of ecstasy pills over a ten-year period from these two sites.” 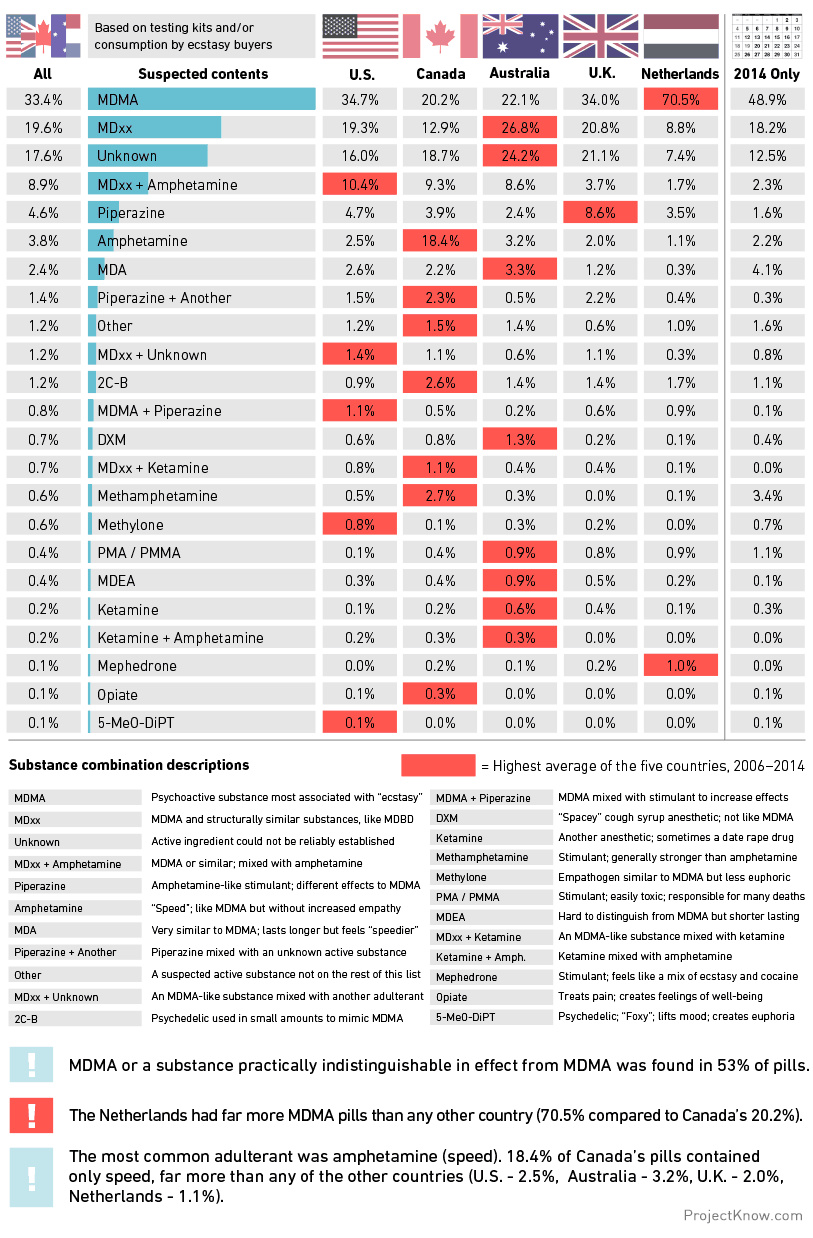 Noisey spoke to Jon Millward, the freelance data journalist who led the study and compiled the information, to explain the report further and to tell us what’s actually in your ecstasy. The results are scary, but the conversation about drugs and the way that society views users and substances is appalling.

One question in particular was truly terrifying, highlighting the fact that most promoters and venues don’t care about you as much as their bottom line.

We ran an interview once with a person making a documentary about drug culture at music festivals. And one thing he mentioned was that although drug kits seem to be a handy tool, a lot of festivals ban them simply because by admitting them would be acknowledging that there is drug use at their festival.

Read the full interview and report here on Noisey.