In the world of internet trolls, masters of the art are a dying breed. Too many use the word falsely. But, from time to time, a kingly man will step in to showcase his talent.

Unless you’ve been living under a rock for the past week, you’ve heard of Mat Zo’s incessant Twitter tirade, where the producer took the time to criticize artists, the EDM scene and more over nearly a week. If you aren’t caught up on the story, read our past articles on the matter here, here and here. Long story short, deadmau5 grew tired of Mat Zo and decided to fire back, in a truly befitting armor.

Yes, sure, Deadmau5′ house does look like a castle. But is he really a Duke? The answer was confirmed today when Deadmau5 fired off his response to the comment in the most epic way possible:

“deadmau5 is like some fuckin Duke in his castle”…

He continued his rant on Twitter, jesting in a knightly tone: 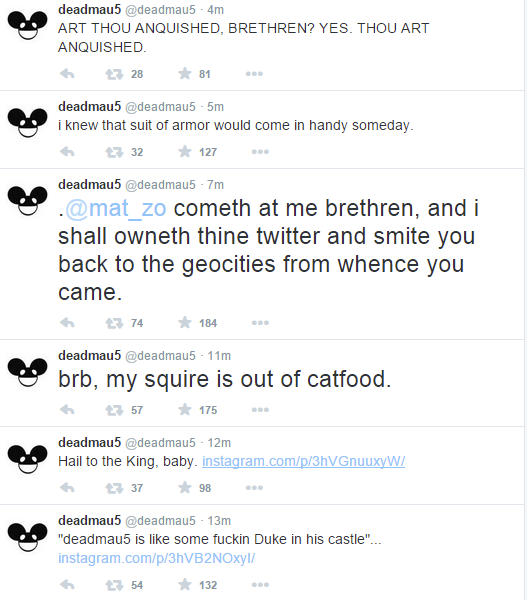 We’re not exactly sure what “anquished” means, whether it’s a typo of “vanquished” or “anguished” or perhaps a portmanteau of both. Either way, well played, sir, and all hail the king… or Duke, as it may be.

Hail to the King, baby.