by Your EDM Staff
in Editorial, House

It’s the fall of 2009, EDM’s ascension into pop culture is starting to hit high gear and my kandi filled wrist is doing its best to hold on for dear life. David Guetta’s remix of Black Eyed Peas’ “I Got A Feeling” is everywhere and after months of practicing at festivals and shows, I finally feel I’m getting my shuffle down. It’s September and there’s only one thing that’s been on my mind the entire month, and that’s dancing the night away to Rank 1, Dirty South, Ferry Corsten, and none other than Laidback Luke at Nocturnal Festival taking place at the NOS Events Center in San Bernardino, CA. 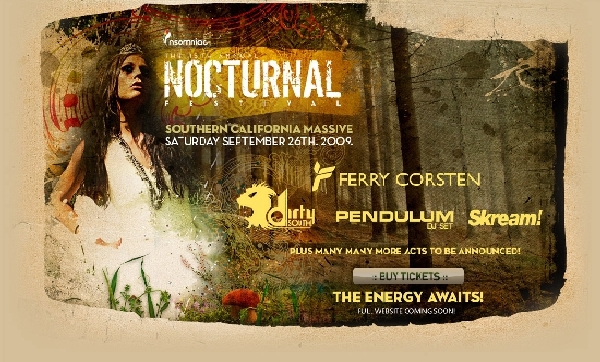 The night was as magical as expected. Ferry spun a masterful set, shooting out gems like “Fire” and “Rock Your Body”, and everybody lost their freaking minds when that legendary drop in Rank 1’s “LED There Be Light” came booming out the speakers.

But the highlight of the night was when the man I came to see took control of the decks and proceeded to blow my mind for 60 straight minutes. That man was Laidback Luke, and he put on a house music clinic that warm September night. Flawless transitions, perfect crowd control, and just complete sonic domination that had me shuffling harder than I ever had before. It was a night that left me humming “Heartbreaker” and “Break The House Down” for months to come, and is still etched in my mind as one of the best sets I’ve ever seen.

Now fast forward to 2015, EDM’s ascension into pop culture has manifested into total domination, and I’m still trying my best to hold on for dear life (minus the arm kandi though, which I really miss now that I think about it). One of the best ripple effects of that domination? My opportunity to catch the best DJs in the world is no longer restricted to solely music festivals. Living in Los Angeles as an EDM lover nowadays is simply remarkable, every month brings an avalanche of the best artists into town. Allow me to present exhibit A: my editor asking if I wanted to cover last weekend’s guests at Sound Nightclub in Hollywood, Laidback Luke going back to back with Gina Turner. As you could imagine, 2009 Lawrence channeled through my body exorcist style and responded with an emphatic YES.

After miraculously finding free street parking a block away from the club, I make my way towards Sound dizzy with intoxication (not from alcohol mind you, but from that magical free parking spot, which is much more potent on a Saturday night in LA than any cocktail). The streets are electric. First dates, drunk club goers, tired workers going home, you’ll find anything and everything on Hollywood Blvd. when the sun goes down.

I guess I fit somewhere in the middle that night, just a guy in a gray t-shirt and black jeans ready to dance for hours to some good house music. Finally at the club, I tell the bouncer my name, he checks it off the list, and off I go into the bass.

As I make my way towards the music, the opener Tony Quattro is already in full swing. If there was any confusion as to what I’d hear that night, Tony cleared that up right away. No major buildups, no major drops, just that groovy “dance til your legs hurt” house music. Each track fills up the dancefloor with more bodies as the unapologetic bassline continues to make me move. The scene is a bit of a trip. Minimal red spotlights shoot at the dancefloor and occasionally glimmer off the disco ball shark (yup, it’s exactly what it sounds like) that twirls above us. Tables and couches line the sides of the dancefloor, filled with the chaos that bottle service tends to attract. Tony is laying it down, and after dropping a sick remix of Ninetoes’ “Finder” to get everyone to a fever pitch, he asks the question that sends the entire club into a frenzy, “YOU GUYS READY FOR GINA TURNER AND LAIDBACK LUKE?”

Following a bass drop that made everybody’s face scrunch up in the best possible way, Laidback Luke and Gina Turner took over the decks looking like Neo and Trinity ready to take over the Matrix. Both donning all black and ear to ear grins, the epitome of relationship goals began their inevitable crowd domination. The volume felt louder, the music felt crisper, and the energy was simply off the charts.

It was a much different Laidback from 2009, but one that seemed very comfortable and confident in his own skin. He switched in and out of house beats with the slightest of ease, keeping us all under his BPM spell for hours. The musical chemistry between him and Gina Turner was very evident, and provided a nice visual aesthetic as well as a sonic one. As the lyrics to Janet Jackson’s “We Go Deep” were echoed throughout the crowd, they cut out the bassline and threw up Laidback’s infamous LL hand gesture. The rest of us followed suit, of course, right before getting smacked in the face again with the bass.

Although the night was absent of many big-room drops or buildups, Laidback and Gina definitely took the audience on a ride. From dropping classics like “Show Me Love” and “Break The House Down”, to getting the whole club to sing along to Justin Timberlake’s “Senorita”, they had us in the palms of their hands and they knew it. I was even lucky enough to witness one of Laidback’s infamous scratching sessions for goodness sake.

I danced, danced, and danced until I couldn’t anymore. As I made my way to the exit, dodging the swaying bodies and wobbly heels, I felt a sense of happiness that Laidback and Gina didn’t let me down. It had been almost six years since that magical Nocturnal in 2009, and as I ate that delicious bacon wrapped hot dog with a side of ringing ears I thought to myself, music still sounds just as sweet.