by Georgia Modi
in About, Editorial, Events, Featured, Previews

The real countdown has started, we are officially only one week out from React Present’s first and biggest summer festival, Spring Awakening! Going into its fourth year Spring Awakening has really sunk its roots into Chicago as its only all electronic festival and React really showed that off with a powerhouse lineup for 2015. Jack Ü will be making their very first midwest debut along side other headlining names like Eric Prydz, Tiesto, Hardwell, Afrojack, and Zedd.

Festivals of this size can be intimidating especially if you’re a new comer which is why us here at YourEDM wanted to create an all inclusive guide of who to see (new and old), what afters are going on, and anything else that will get you pumped for a weekend of music in the windy city!

Eric Prydz – Friday at 9:00pm at the Equinox Stage

This guy has a whole slew of new things coming out so we felt the need to put his name on the list (besides that fact that he’s overall just a great DJ). His new song ‘Generate’ will be avaiable on iTunes and Spotify this Monday, June 8th, just in time to get played out at the festival! You can check out the music video for it here or just listen to it below! Keep an eye out too because over the course of the summer we will see 3 EP’s come out with unreleased music all leading up to his debut album coming out in October. You can get more info on his facebook page.

Now Lane 8 might be one of those artists that you aren’t as familiar with but this guy is on the Anjunadeep label and you might have caught him opening up for Above & Beyond on their ‘We Are All We Need’ tour this past winter. Set for a July release his first album ‘Rise’ is sure to get a lot of attention and probably some plays this weekend since 3 songs have already been released from it. The most recent being ‘Hot As You Want’ featuring Solomon Gray which you can listen to on Soundcloud! Pre-order his album now from his site lane8music.com.

This may seem redundant because lets be serious… these guys are everywhere but I couldn’t not add them to the list simply because Spring Awakening will be their midwest debut! Of course both Skrillex and Diplo have played in Chicago separately (Diplo even has his own set at the Equinox Stage) but we all know they are going to put on one heck of a performance to show Chicago what they are all about.

Mija – Friday at 5:00pm at the Phoenix Stage

This pretty lady has been making quite the name for herself recently in my eye’s and it felt only right to include her here. Being one of the newest members to join the OWSLA label we have seen some awesome releases coming from her that would get anyone excited. If you want to learn a little more about her check out the post Coachella interview we did back with her in April here and you can read through that while listening to this little gem below.

Hot off the tails of the release of his sophomore album, ‘True Colors’, Zedd seemed to be on obvious choice. With how involved the creation was for this album and how crazy some of the Zedd True Color scavenger hunt’s were I just know his set is going to be unforgettable that weekend. I was lucky enough to experience the True Color event in Chicago where he played the single ‘Beautiful Now’ for us, you can read all about my (and one of our other writer’s) time at the event here. I can’t wait to hear the song being played out for everyone there to hear.

Derrick Carter – Sunday at 5:30pm at The Hanger

For this last one I had to give some love to one of my hometown favorites, Derrick Carter. This guy is a staple in the Chicago house music scene and after seeing him perform in Millennium Park recently it only felt right to include him. This guy will get you moving and there is no doubt about that so if you haven’t checked him out yet go for it, experience a little something new, I promise it wont hurt.

The music doesn’t stop just because the festival is over, especially since it wraps up at only 11pm each night. React Presents has put out a great list of afters to keep everyone’s night going, below you can find that list. You can get tickets to all these events at Clubtix.com.

A Little Something Extra

Over the past few weeks React Presents has been collecting mixes that artists, like Oliver Heldens and Andrew Rayel, have done exclusively for Spring Awakening. We’ve got the whole playlist for you to enjoy and to get you pumped up for next weekend. It might even get you excited to see an artist that you never have before too!

All in all this is shaping up to be one of the best years that Spring Awakening has ever had and I can’t wait to be a part of it. For more info or to purchase tickets to the festival (GA, VIP, and Single days are still available) you can go to springawakeningfestival.com. The festival takes place June 12th – 14th in Chicago at the iconic Solider Field downtown. 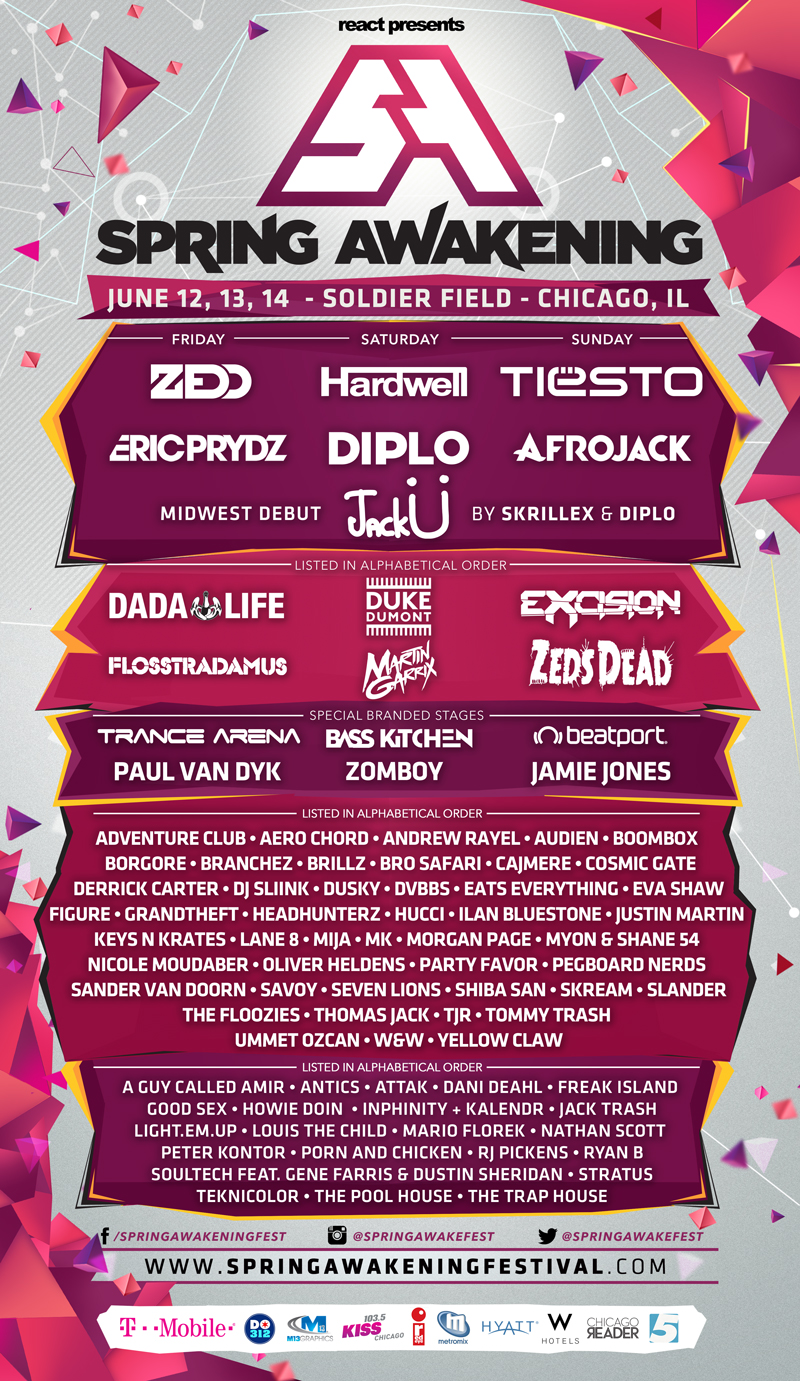 $200,000 Buys You A Festival Experience Inside A Dormant Volcano

Lightning In A Bottle: One of The Happiest Places on Earth [Review]

Lightning In A Bottle: One of The Happiest Places on Earth [Review]