Well, it’s about that time of the year again. The birds are out, the weather is cooling down a bit, and the internet is on fire with people getting ready for Burning Man. The annual event at Black Rock City in Nevada is set to begin on Sunday, and we’ve got some big news to share with you.

While many might not exactly consider Diplo to be Burning Man material, organizers would have to disagree, booking EDM’s bad-boy with his partner in crime, Skrillex, for the second year in a row. And it seems like they have some special surprises for those in attendance, according to some Tweets sent out by Diplo. He took to Twitter to announce a mobile Major Lazer set on the Janky Barge. This will be followed by a “deep dub and reggae” set from Diplo on the infamous Robot Heart sound car and a Diplo vs. Jack Ü set at the Opulent White Party on Wednesday night. If that’s not enough, there will also be a 2-hour Major Lazer vs. Jack Ü set at Camp Question Mark.

Check out the series of Tweets below! 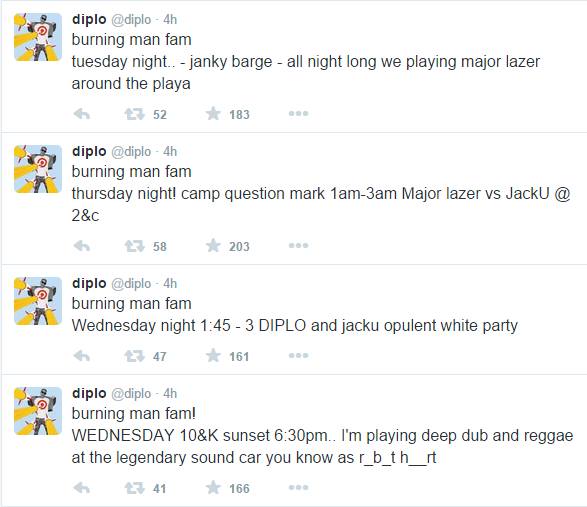 One thing that crosses my mind when reading these Tweets is the fact that Burning Man is known for embracing the eccentric side of life. And while Diplo may think he’s a weird dude, Burners easily take the cake.

Dip’s ‘mainstream’ lifestyle and lavish ways seem to clash with Burning Man’s ideals, leading me to believe Jack Ü may not get the turnout they’re expecting. But with the complaints that the crowds at Burning Man are becoming more ‘corporate,’ it will be interesting to see how this plays out…

Not only that, but Jack Ü was reportedly booed off stage at their appearance last year (though the story is a bit more complex). Burning Man has a history of letting loose and especially building a community, and that’s not something that Jack Ü is known for. Fans, yes. Community, not so much. Is their presence at Burning Man possibly detracting from what the pure experience should be? Or is Burning Man slowly turning into a music festival, against its patrons wishes? Who knows… but the Burner crowd is a vocal one, and we’ll be sure to hear their side of the story after all is said and done.