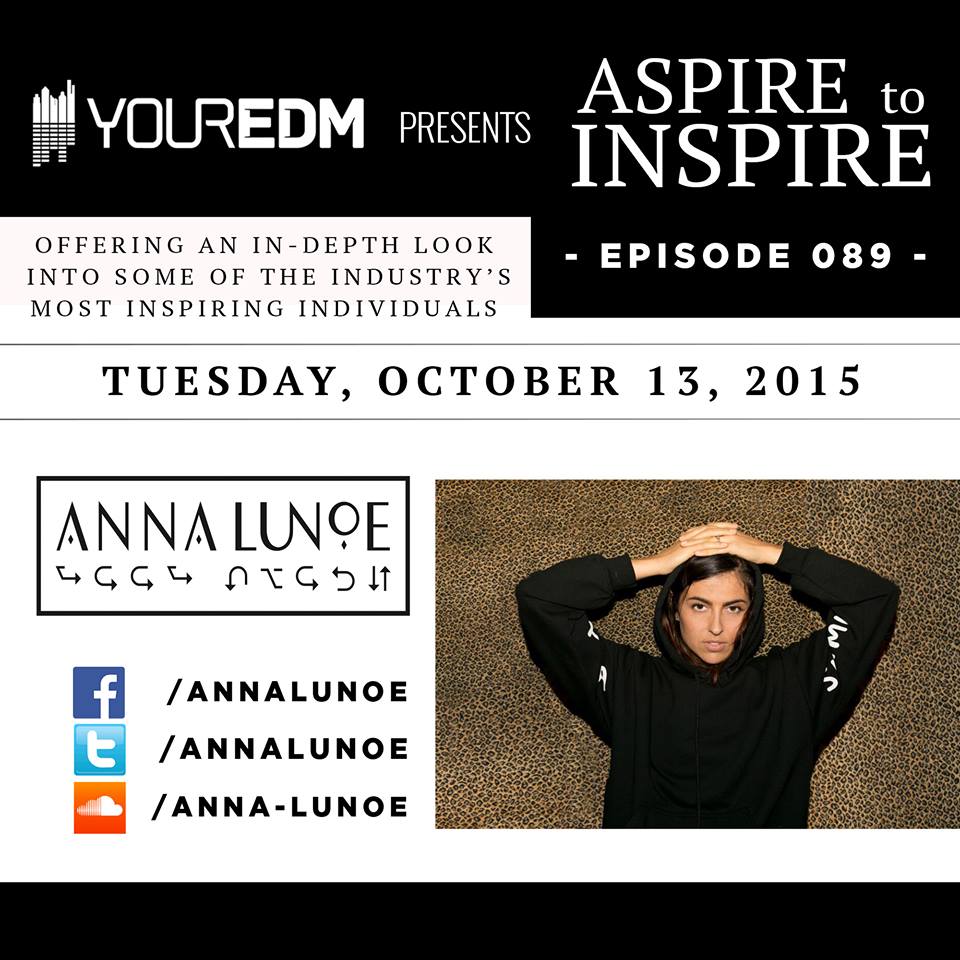 For some artists, they burst onto the scene like an asteroid.  Sure, they make a splash, but sometimes, they flame out.  For other artists, they slowly carve out their niche, hone their craft, build their audience, and maintain long and respected careers as mainstays in the industry.  Australian DJ/producer/vocalist/radio host, Anna Lunoe falls into the latter category.

Her imprints can be felt all over the industry since she arrived in the US back in 2012. Her sound is diverse and appealing, whether it’s the most underground club, or the summer festival circuit, Anna has played them all.  Not only does she host her own Beats 1 Radio Show, she has put out four EPs, and collaborated with artists as diverse as Flume, Chris Lake, and Sleepy Tom.  Needless to say she’s pretty accomplished.  It wasn’t always easy, but for Anna, she knew music was her calling early on.

“Funny enough, as a kid…from a very early age when I was like 5 years old, I learned how to tape using a tape recorder, and I started making radio shows.  I started recording all my favorite songs and making compilation tapes and I’d host them. I’d record my voice on them and all that.  So I think from a very early age, I really gravitated towards broadcasting music…my favorite music…finding music, it was something that really triggered me.”

Although she resides in Los Angeles now, since Anna grew up in Australia, she says that L.A. seemed like a different world.  Despite achieving some fame down under, Anna relays that this success did not translate once she relocated to the Northern Hemisphere.

“It’s so far away from here. In the last five years it feels like the world’s gotten a lot smaller.  But, 10 years ago, L.A. seemed like another planet.  I was really big in Australia before I moved to America, but that didn’t help me. I started from scratch again when I moved here.  It was a really great breeding ground, and it was really great at training me and making me hone my talent, work out what I was good at, what I wasn’t good at, but it really was another world when I came here and I had to re-learn a lot of stuff.”

It’s clear that Anna is driven by her love of music, and when you’re a performer and you commit to being a professional, you have to sacrifice some personal things.  I asked Anna if she has any balance between her work and personal life, and as she explained they blend together, and that’s just fine with her.

“There’s no balance.  When you love music…when music is your job, you just think about it, you dream about it, you come up with ideas in the shower.  I come up with ideas when I’m walking down the street. I’m constantly recording my voice.  Literally it never ends, which is like a genius, amazing thing.  It’s relentless for sure, but it’s cool, I wouldn’t change a thing.”

“There are definitely things that you need to fight for a little bit more, and there are just social patterns. People expect women to be a certain way, it’s well documented…but, yeah, there’s definitely a thing where you have to remind yourself, like, if I was a guy, this wouldn’t be a problem, so I’m just going to do it.  And I’ve always thought of myself as an equal, I grew up in a house with all my brothers, and my sister, and my dad, and I was treated the same.  I think of myself as an equal, but it’s weird when you’re reminded that you’re not.  All the boys ask you, ‘What’s it like to be a female?’ It’s like, I don’t know, what’s it like to be a male?  We’re humans and we’re all the same in my mind…That’s sort of like everybody else’s problem, not mine…I know what I am, and I know what I’m good at.”

We all know it’s a male dominated industry, and like Anna said, there’s no need to go into detail, as it’s well documented.  Anna said it’s not really something she gives much thought to.  Growing up with several brothers in a large family, Anna always viewed herself as an equal and was treated as such. Therefore, she doesn’t know anything other than to be herself, which is great advice.  If you’re talented and believe in yourself, the rest should take care of itself.

Not only do artists inspire their fans, but it’s also a two-way street.  Sometimes, messages of positivity can make just as big of an impact on your favorite artists as they do for anyone of any walk of life.  Anna recalled when she first signed up for Snapchat, and maybe got carried away adding followers.  However, this gave her access to tons of inspiring snaps.

“When I joined Snapchat I thought I had to add everybody to see them, so I added everybody, and then I got these beautiful letters on private message, that were like, I saw you play here, and I talked to you, and then I started doing this.  I know that I’ve influenced some people, not a lot of people, but I know that I’ve helped people find their creative voice, and that’s something that I find hugely inspiring.”

Who knew that Snapchat could change the world for the better?  However, it’s these stories of seeing someone motivate you to be a better person that drive Anna to do the same.  Anna exudes the utmost confidence on stage, however, for a skilled performer it wasn’t always that way.  Anna recalls making music in private, because she was afraid to show the world her gift.  In fact, Anna believes that anyone that goes and follows his/her passion is displaying true courage; believing in yourself can be tough.

“Even though I was making music privately as a teenager, it was only when I worked my ass off on it in my 20s that I really feel like I sort of worked it out.  It was a challenge, and I had to really fight for it.  So I really appreciate people’s journeys and the courage that it takes to make music, and decide you want to do something – you’re going to write, you’re going to be a booking agent, whatever it is that you want to do, it takes a lot of passion and a lot of putting yourself out there and being like, no, this is me, and I’m going to do this.  So that’s a huge mountain to climb…”

Speaking of believing in yourself, you know that old saying “attitude is everything”? Well, there’s a reason why it’s an old saying…because it’s true.  You might recall the scene in the film American Hustle where Christian Bale’s character talks about the power of belief. If you believe in something enough, you can make it come true.  If you have a talent or passion, believe in it.

“Believe in yourself.  I know that’s lame, but literally, believing and having confidence in your abilities gets you so far.  I’ve seen people who aren’t even good at what they do become super successful because they believe it.  Believing it is like 90%, and I’ve seen a lot of very talented people who never believed in themselves, and they don’t go that far.  So my big life lesson would be to commit, own it, believe in it, do it.”

There you have it, truly one of the most unique and inspiring people in music today. Anna Lunoe breaks down barriers, whether they be the ones society imposes based on gender or race, Anna just wants the music to unify us all.  She’s worked hard and earned her spot alongside such industry stalwarts as Skrillex and Destructo.  Anna has just announced her US “Hyperhouse” tour featuring some of dance music’s newest talents including: Rezz, San Holo, Sleepy Tom, DJ Sliink, Wuki, ATLiens, and Aryay.  For ticket info: http://www.itshyperhouse.com