SoundCloud Starting To Ban Users For Reposting Too Much

SoundCloud has had its fair share of problems for some time now. Whether it’s the unwarranted takedowns of tracks uploaded by copyright owners, the paid subscriptions they’re currently contemplating, or just their entire business model which has come under scrutiny – things haven’t been so rosy for them through 2015.

Now they’re back in the news with a move aimed at phasing out major SoundCloud pages by banning users who repetitively repost music. Users who have reposted heavily in short periods of time are starting to receive messages from SoundCloud stating that their account “loses that human feeling” which has resulted in a number of temporary bans. An example would be the 1833.fm page, which reposts an average of 3-6 tracks a day and has received such a warning.

Currently, SoundCloud’s bans last around nine hours but it’s likely that with each offense the bans will increase in length.

While we’re not 100% certain that SoundCloud’s bans have certain targets in mind, it would appear that the move is aimed at certain channels and networks that use payola services, that is, those that charge artists/producers money for reposts over vast networks encompassing hundreds of thousands of followers. A move we can most certainly get on board with.

Check out the messages sent out by SoundCloud to temporarily banned accounts below. 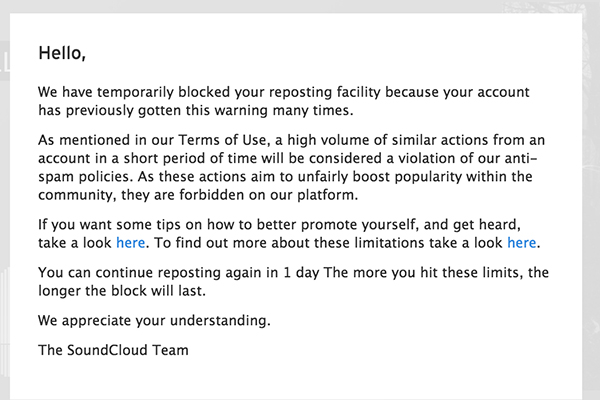 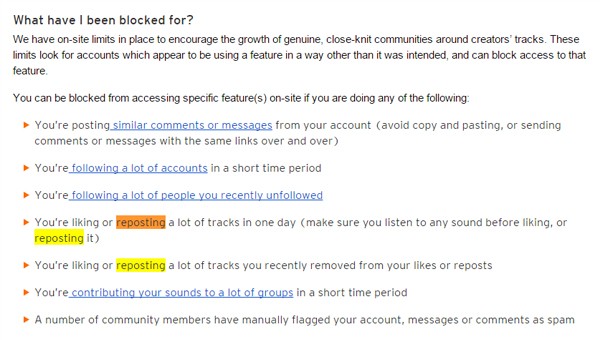