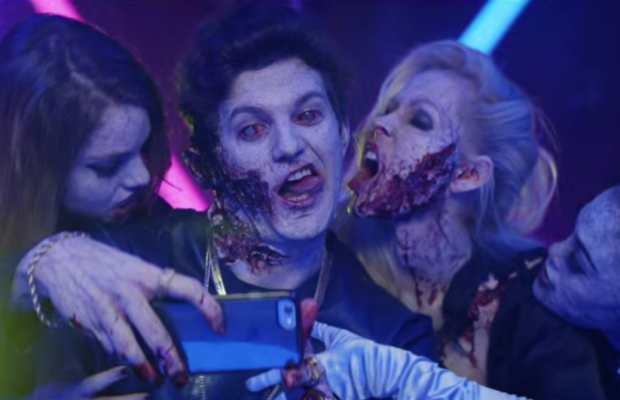 Halloween may be officially over, but there’s about a pound of candy and a few more movie marathons that say otherwise. If you’re not quite ready to let go all the thrills from Halloween, we recommend you go out and see Scouts Guide to the Zombie Apocalypse with our favorite blood-thirsty DJ, Dillon Francis.

To celebrate the release of the movie, the DJ reprised his role as Dead Dillon and invited fans to watch an exclusive premiere of the film in select theatres across the US. New York fans were even greeted by Dillon, actress Sarah Dumont, and director Christopher B. Landon. As part of the Ultimate Fan Experience, a short featurette was shown prior to the actual movie. Dillon fans laughed at his zombie-themed visuals as most of the tracks from his latest EP accompanied it, while the older, professional movie critics looked at their watches and waited for it to end.

This dynamic continued through the film, as the younger target demographic found the raunchy humor of Scouts to be enjoyable. Though the film itself received negative reviews from the press, one should take their word with a grain of salt considering it’s a movie about a bunch of high schoolers battling the zombie apocalypse without any adults around to help. Dance music fans might scratch their head at the fact that Hollywood’s idea of a rave still involves highlighter tanks and glow sticks, but if we don’t hold every film with EDM to the same standards as We Are Your Friends, they might still be able to get away with it for a few more films.

The real story here is that Paramount deserves a pat on the back for using Dillon Francis as a marketing campaign for the film. The Ultimate Fan Experience was a major success, especially the free afterparty at the Music Hall of Williamsburg. After the film, fans received a gift bag with a free wristband, T-Shirt, smartphone sticker wallet, and Metrocard to persuade moviegoers to travel across the bridge to the show on the rainy Wednesday night. Those who made the trek were treated to bacon s’mores, a limited edition Dead Dillon Pizza Slime shirt, and a surprise performance by Trippy Turtle before Dillon’s set. If this is what a DJ cameo in a major Hollywood film leads to, then I’m open to more cross-promotion in 2016. But let’s just hope no DJ tries to become an actor. We have enough actors trying to be DJs, enough is enough.

Scouts Guide to the Zombie Apocalypse is currently in theatres worldwide.