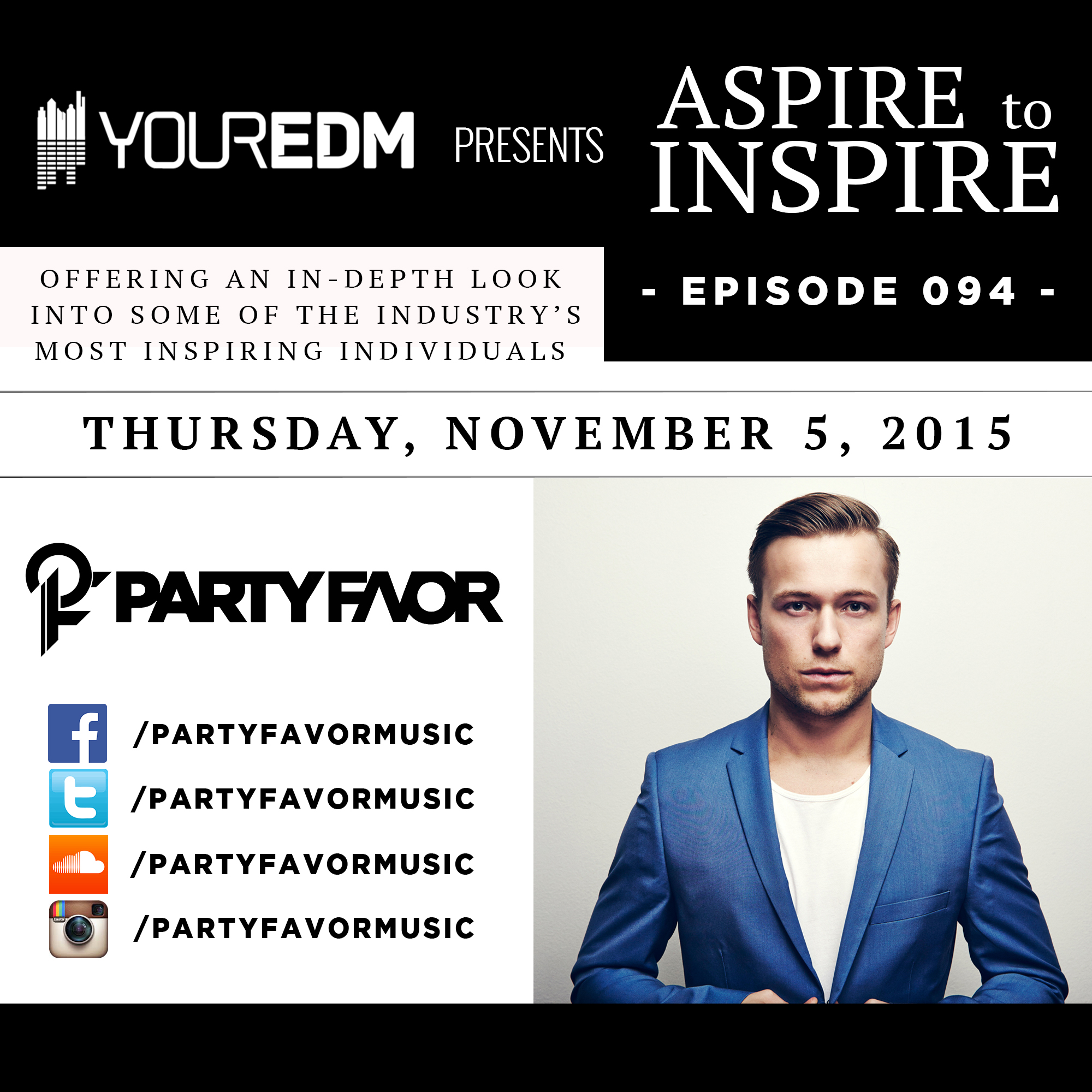 Have you ever had the sense that you were leaving something on the table?  Even though things might be going well, have you ever wondered if you could do something more?  Never let your dreams go unfulfilled…that is the story of Dylan Ragland, better known as Party Favor.

Dylan grew up in Park City, Utah, and had a fairly typical upbringing with a loving and supporting family.  Growing up, Dylan had a love and passion for music, but it was never on his radar as a possible career.  However, he’s always had a knack for entertaining people. In fact, Dylan said he originally wanted to be an actor when he was a kid.

“I went through a lot of different dreams when I was a kid.  I think one of my big ones, when I was young I actually wanted to be an actor.  Which is funny, the ironic thing is here we are now, fast forward and in some ways I’m still performing, so I’m still entertaining people.  So when I was young I was doing theatre, musical theatre, all that kind of stuff, and I always knew I really enjoyed bringing joy to people, and I think there was something about being on stage that I was always comfortable with.  But, also, bringing an element of joy and happiness to someone else that made me really stoked.”

Despite being an entertainer at heart, and loving music as well, producing music was something that didn’t come up until Dylan went to Chapman University in Orange County, California.  In fact, Dylan says when he was younger he became frustrated trying to learn how to play piano and guitar.  However, he got into producing, started DJing with a friend at school, and decided to give it a go.

“I was going to the film school there and I started dabbling in music, because I had loved dance music for a long time. I started learning the tools of the trade while I was there.  Next thing I knew, it was like, alright I’m going to try this and see where it goes.”

In fact, it was his transition from a job at NBC out of college to life as a full-time musician that Dylan cites as being the most uncertain time of his life, but sometimes you have to take a blind leap of faith so to speak, and believe in yourself.

“After college I was working at NBC, so I got on the path to doing film, which I had gotten my degree for and I loved that.  But, there was this aching feeling that I was missing out on my passion, which is this music.  At the end of college I believed I could do something with music. I was basically working, working, working, and I quit my job at NBC, and I didn’t really have a job.  I took odd jobs doing video projects, and editing, and filming nightclubs…things like that.  It was one of those things where my parents were like hey, we support whatever you want to do. We want you to do what makes you happy, but we’re not going to pay for you to live.  So I was on my own and I made a really scary step and put all my eggs in one basket for music.  It was definitely a really dark time for me…I took the leap to pursue this, and as we see now, I’m doing okay.”

It’s clear that Dylan believes in staying true to yourself and following your own path.  He talked about the challenges of staying ahead of the curve as an artist, but also maintaining his own unique identity and sound.

“In this day in age, music moves so fast. What’s hot one minute is not hot two weeks later…or what style is this, whatever.  I think for me, it’s being truthful to my sound and to my fans, and also, getting left in the pack.  I think that there’s so much talent out there nowadays. This talent is constantly nipping at your heels and you’ve got to be on point all the time, 24/7…a lot of times a person’s biggest fear is stepping outside of his/her comfort zone and hoping that people like it…I’m just hoping I can continue to make cool music, that doesn’t become lame and irrelevant.”

And leave no doubt about it; Dylan cherishes those fans and moments with them.  Sometimes he’ll hang back by the bar at shows when he’s not on stage to scope out the scene.  These are great times for fan interaction and as Dylan told me, the love he’s gotten from fans has also changed his life.

“It’s so crazy to me, dance music fans are so passionate, I would say the only level of more insanity would probably be like, Taylor Swift fans or Justin Bieber fans.  What’s so cool about dance music is that obviously the PLUR vibe gets a lot of bad rap, but the overall idea of it is great. It promotes such a positive vibe and that’s what always attracted me to the music.  No matter if it’s the heaviest dubstep, or like, tropical house, it’s promoting something positive.”

“For me, just recently I was in Seattle on the Cash Cash/Tritonal tour and I had a fan walk up to me. He was all decked out in his rave gear and all that stuff, but he came up and he told me that me and a couple of other artists he named, were some of the people who got him through a really dark time in his life.  He didn’t specifically say what it was, but he said he was close to ending his life. He basically told me that my music, as well as a few others’, and dance music in general, really, really helped him get through that time and helped turn his life around for the better.  That was definitely the most emotional for me, because it was like, wow, inadvertently, I maybe have helped someone from taking their own life and helped make their life more enjoyable.  That really hit me because that’s exactly why I do what I do.  I get more enjoyment out of seeing the smiles and joy from people and their response to my music, then I do from anything monetary or fame related…It was a really special moment for me, definitely something I’ll remember forever.  I hope that if he ever reads this, he knows that he changed my life too.”

Dylan is always aware of his good fortune, and he feels he’s in a great position to give back to his community, as well.  That’s why he’s teamed up with Children’s Hospital of Orange County to help raise funds and help those in need.  The Children’s Hospital of Orange County and Party Favor will be working hand in hand to raise money for the hospital to help nurture, advance, and protect the health and well being of children.

“We have seen other artists from our community showcasing their help in the community and I feel this is the best way I can help make an impact. Our goal with CHOC is to be able to cross the two gaps between EDM and charity donations that allow the public to be fully disclosed, meaning they know where their money is going 100 percent.”

The man known as Party Favor will be busy all throughout the fall and into next year. Party Favor is finishing up work on his new EP due out next spring.  Dylan is hoping to show fans a new side of Party Favor with some new production styles.

“It’s just something that I’m really proud of to put together a group of songs that are like, hey, here’s another side of me, that maybe you haven’t heard yet.  Here’s the banger, Party Favor side, but here’s also some songs, with full lyrics, and something you can listen to on the radio or in your car that hopefully will bring in some new fans and keep my regular fans happy too.”

Party Favor, Brillz, and the rest of the Twonk Team hit the road for the Twonk Di Nation tour starting November 18 in Syracuse, New York.  Party Favor will also make a special appearance at Dillon Francis‘s 4th Annual Weekend of IDGAFOS at the Shrine Expo Hall in Los Angeles in December.  Check out Party Favor’s fresh remix of “Doctor Pepper” just released on Mad Decent below!