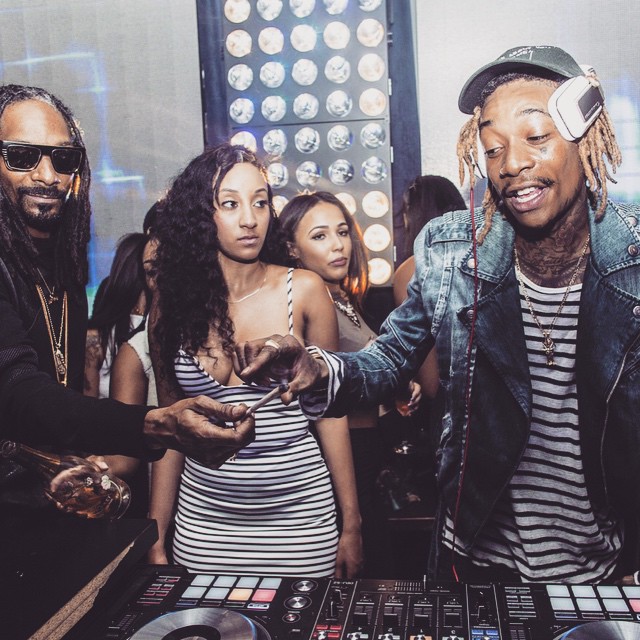 Wiz Khalifa Loves To DJ & Is All About SoundCloud Too

Celebrities have been getting into DJing more and more lately, and with the easy money and exposure, it’s a win-win. However, other musicians making the crossover is less common, and a world-renowned rapper is even less likely.

But that’s not holding Wiz Khalifa, aka DJ Daddy Kat, back from exploring the field. In fact, he calls it a “real passion of mine” and insists that this is a serious pursuit of his. From performance videos (below) you can see he’s primarily playing hip/hop and trap, but don’t count him out of pulling from dance music in the near future, especially with upcoming, high-profile rap/EDM collabs imminent. Here’s what Khalifa had to say about the art of DJing:

“I started doing blends and putting it on Soundcloud. I wanted to try to figure out a name I could use where people could search but it wouldn’t really come up. I just landed on Daddy Kat as something that sounded fun, interesting and mysterious, but still felt like me. Eventually, I just kept messing with it—kept practicing, kept DJing, started booking gigs—then realized, ‘OK, this isn’t just an Internet thing. This is a real passion of mine, rocking crowds and doing the DJ thing.’ I ran with the name, and I feel like it gives me just a little bit different edge to perform under that name, rather than have people just look at it as a Wiz project.”

Now we’re just waiting for Jack Ü to give him a ring and drop a fire collab.

Wiz also gets some impressive praise from a fellow rapper turned DJ, Ty Dolla $ign, who actually just released a hybrid bass house/trap banger with none other than HARD Presents’ Destructo that you can listen to here.
On DJ Daddy Kat:

“Wiz’s DJing skills are incredible. He’s actually called DJ Daddy Kat. He kills it. Every party we went to, they go up…. We both DJ actually, so he’ll give me songs, I’ll give him songs. DJing is the shit.”

Of course, DJ Daddy Kat is already raking in the high profile gigs and even has a Las Vegas residency locked in for the year, and a new album dropping February 5th entitled Khalifa which we’re sure will be backed by some true EDM remixes.