When I was still in high school about five or so years ago, there weren’t too many events with electronic dance music icons headlining them for all ages. All of the nightclubs were more interested in bottle services and high-class clientele than playing host to 18-years-olds like me at the time. Between concerts that I could attend, which only booked rap and reggaeton acts, and the nightclubs booking DJs I couldn’t see, it seemed that I would have to wait for March for Ultra Music Festival to rear its massive head before I could hear some of my favorite music live. If you recall, Ultra had not yet raised its age limit to 18+ back then.

Then, one day, some friends of mine wanted to try saving up some money to attend a show called Dayglow in the Miami Beach Convention Center. A few years earlier, Dayglow was an event held in clubs like Mekka and Space where these venues wrapped their rooms in transparent tarps and soaked Miami’s nightcrawlers in a variety of slimy, gooey paint while DJs played anything from popular electro and progressive house to the underground sounds of classic house music and the then evolving sounds of dubstep. But the Miami raving scene craved for more from the minds behind Dayglow, and so they acquired their biggest venue: the Convention Center, where they had R3hab, Benny Benassi, and Diplo as headliners for a huge show. It seemed like this was the biggest thing Dayglow had ever done and could ever do at the time and it was fantastic.

Fast forward to today, and Dayglow has transformed into Life In Color, an event that skyrocketed into a touring music festival and raised the stakes in their hometown. This was no longer just a rave held in the dark fathoms of a warehouse in the middle of town, but a massive exhibit of messy art and banging beats settled in the parking lot of an NFL football stadium. They proceeded to book more than 10 times the amount of artists than they did half a decade ago, and then expanded their event to two days last year.

Life In Color grew to a tremendous size that no one could have foreseen, and all for the better. 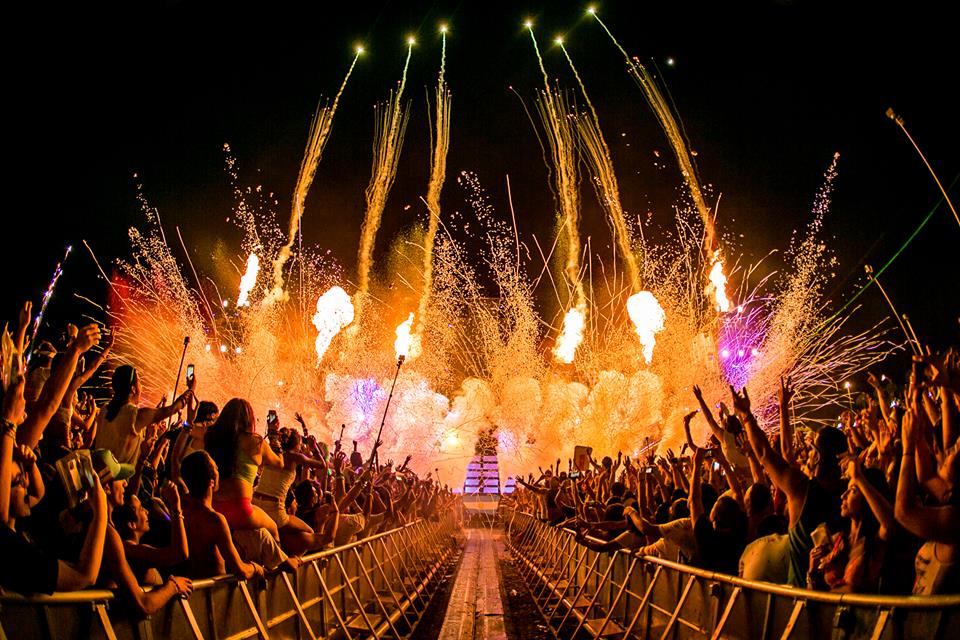 The latest incarnation of the world’s largest paint party made one major improvement from the year before. Last year’s Life In Color , which was headlined by the like of Kaskade, Madeon, Deorro, Carnage, The Chainsmokers, Bingo Players, Slander, NERVO, and more was somewhat overbearing in extending the paint-spraying entertainment as a two-day festival. Although the musical acts of Day 2 were just as energetic and incredible as Day 1, having to drive home soaked in head-to-toe green-blue-pink goo isn’t as exciting as it sounds when you walk off the festival grounds and realize you should have brought about fifteen more towels just to wipe down you and your crew. So toning it down into a full day actually helps in making the experience special, while keeping it from feeling like too much of a mess… those clothes ain’t going to wash themselves.

Even though this year’s Life In Color was not a full weekend long, it didn’t stop the number of acts from giving their all that Saturday afternoon. The stages were divided as kingdoms with the main stage dubbed the “Raging Kingdom”, the trap, dubstep, and bass music tent dubbed the “Underwater Kingdom”, the smallest live music stage known as the “Sphere Kingdom”, and the relaxation station called the “Spirit Kingdom”. The crowds were tested with early sets crushed by the likes of Zookëper, Bonnie X Clyde, Morten, and more who paved the crowd with recipes concocted of rhythm, melodies, and bass. With each artist replacing the next, the crowds continued to increase and condense to the moving grooves and head-banging beats.

As the sun began to set, it was time for the headliners to take the stage and drive the crowds wild. The main stage, with its enormous inflatable lion head facing the crowd, saw the Life In Color golden-boy David Solano and television actress and DJ Ruby Rose playing massive big room, electro, and progressive house anthems. Meanwhile, artists BIG MAKK and Ricky Remedy captivated the 360 degree paint-splashing zone with their trap bangers and moombahton beats.

Another facet of LiC that makes it a very special music festival is their ability to switch things up with their main stage lineup. Unlike many electronic dance music festivals, Life In Color in Miami typically has a spot reserved as a “special guest” act. Two years ago with 2 Chainz, and last year with Diplo. This year’s special guest spot was filled by Big Sean who had the crowd singing along to songs like “Clique”, “Dance (A$$)”, and “IDFWU”. Following this stray from mainstream house music was the Skrillex and Diplo combo Jack Ü, who not only played their biggest tunes, but also played unexpected songs like , “I Will Always Love You” by Whitney Houston, “The Next Episode” by Dr. Dre and Snoop Dogg, and “Power” by Kanye West. They even kicked off their set with the lights off in the early evening with the “Empire” theme song from the Star Wars films. Talk about a way to catch your crowd’s attention. And this was only the second best set of the evening.

Back at the Underwater Kingdom, the tent with the giant, inflatable octopus tentacles pouring over the stage featured the likes of Troyboi, NGHTMRE, Flosstradamus, Keys N Krates, and Zeds Dead smash the dance floor with towering bass music. From trap anthems like the Cesqeaux remix of “Dopest” by Moksi, to the DJ Snake song “Propaganda,” the audience was jumping and pumping as the speakers were spewing ground-shaking music. But of these sets, it was the performance of L.A. producer and DJ NGHTMRE that had me enthralled beyond my wildest expectations. From track selection to remarkable transitions, everyone at Life In Color, including me, were unable to stop moving back-and-forth and side-to-side. 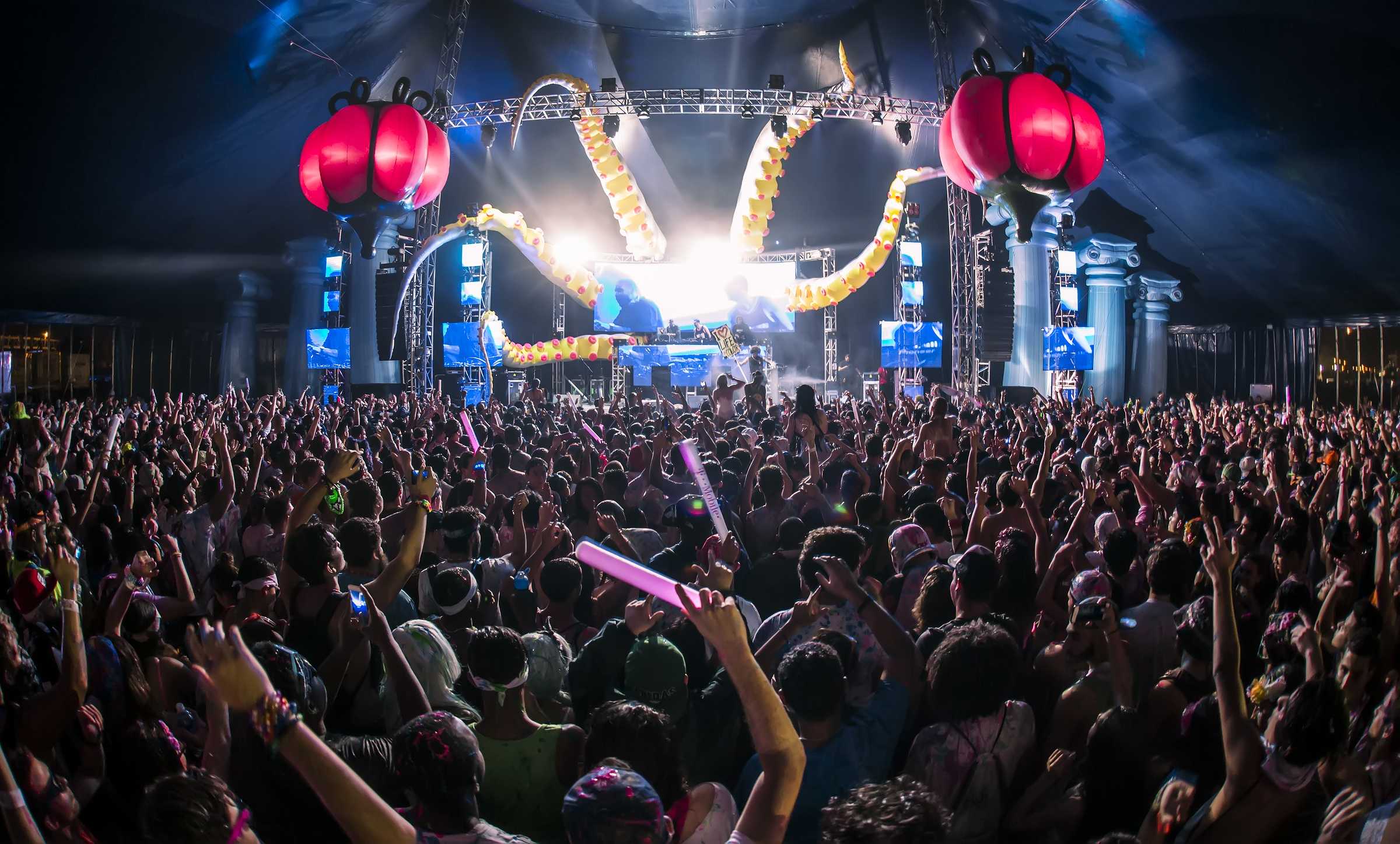 The evening was wrapped up with duos Flosstradamus and Zeds Dead at one stage and 3LAU and Steve Aoki at the main stage. These DJs were joined by a light shower over the already drenched-in-paint patrons that escalated into the night. Only the very large crowd of fans stuck with the Raging Kingdom as everyone else was either running to stay dry in the (at the moment, ironically named) Underwater Kingdom or all the way back to their cars. But in no way did it kill the party mood, for those who went to their cars were either turning in early from a full day of partying or heading over to Heart nightclub in Downtown Miami to catch Bonnie X Clyde, Morten, and NGTHMRE spinning more tunes past the crack of dawn.

Once again, Life In Color follows up their biggest year ever with another spectacular edition of music, paint, and good times. The “World’s Largest Paint Party” continues to wave that title like a badge of honor. Even though they had a small rain over their parade and shrunk the length of their event significantly, the organizers booked phenomenal artists and created ridiculous stages that quenched an audience searching to get wild and messy. By the time next year comes around, I can only expect the best and craziest experience from Life In Color.