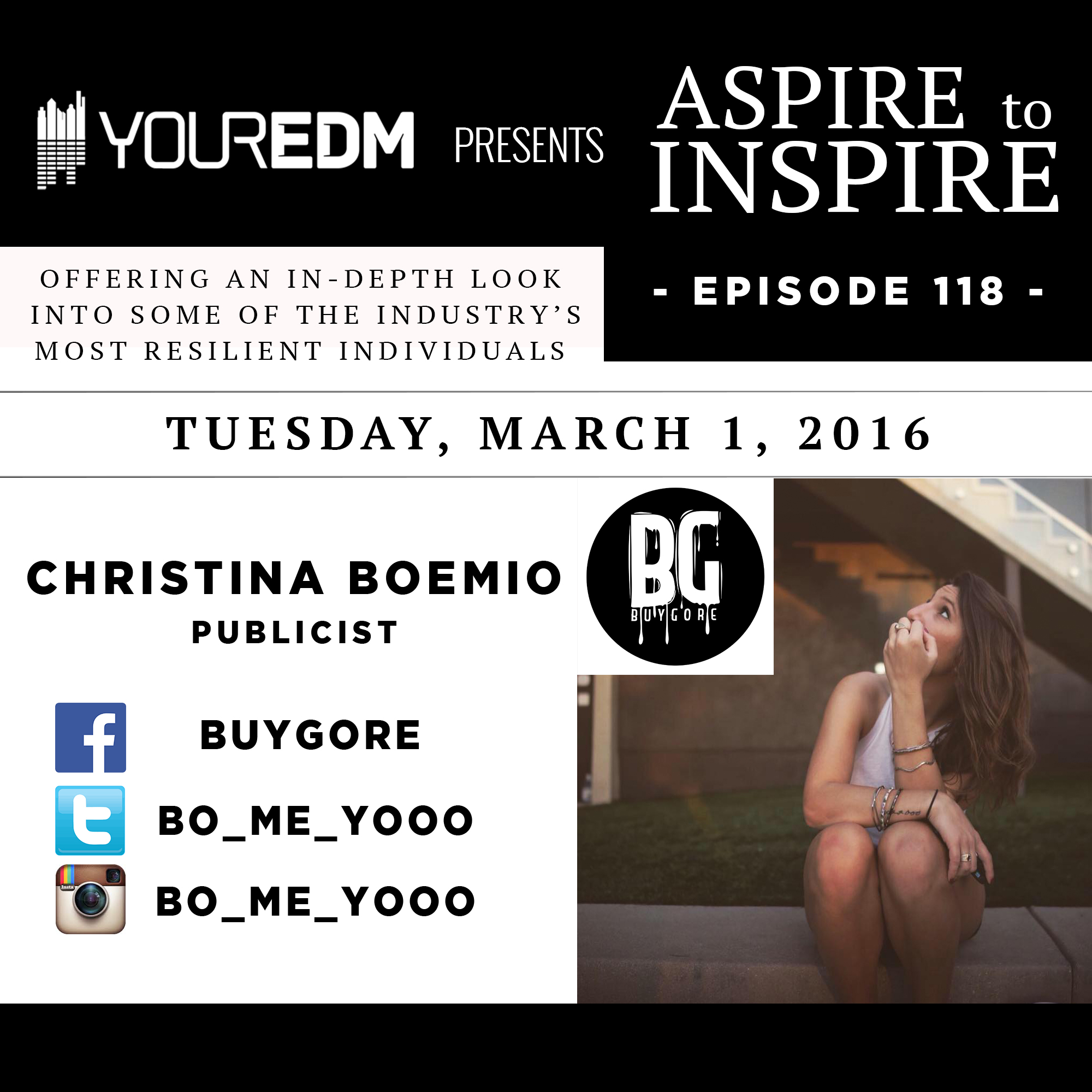 Sooner or later, one finds him/herself at a major crossroads in life. More often than not, the choice to be made while standing at that crossroads is a very difficult one. Whether it’s related to a career, educational path, or anything else, one must have a great deal of courage to make such life altering decisions. In this episode of Aspire to Inspire, Buygore publicist and co-founder of Nap Girls Int’l, Christina Boemio takes us through her journey from crossroads to crossroads and shows just how much it means to take control of our own lives and chase our dreams.

From a young age, Christina had her sights set on a career in the medical field. With a passion for psychology and psychiatry starting as early as middle school, she was able to get involved with shadow programs that allowed her to visit hospitals and follow doctors through everything from rounds to surgeries. Although she gained a great deal of knowledge and experience from the program, her interests shifted from the medical field to the business world once she was accepted to the business school at Louisiana State University.

“I thought maybe I would go into marketing and advertising. After a semester I actually transferred out of LSU and went to the Fashion Institute of Technology in New York for a semester. I wanted to become a fashion stylist— the dream job. Styling for celebrities and whatnot. But then I ended up coming back to LSU after a semester because my mom was really sick and I was having a lot of family problems. Plus I missed having an actual college experience. I stayed in fashion and that was what I actually ended up getting my degree in— fashion merchandising with a minor in business.”

With her college days behind her and a few months put into a 9-5 job back home in Texas, Christina already felt the need for a change.

“Four months was all it took for me to realize that this wasn’t for me. I was up at five every morning, in the office by seven, coming home at 7:00PM and it was just so monotonous. I was introduced to electronic music when I was in school and had a couple of friends that promoted shows in New Orleans. I got to a point in my job where I was basically like…fuck this. I quit my job, packed up my car, and moved to New Orleans. I didn’t have a job and only knew a few people, and just started promoting/handing out flyers for companies that I knew in New Orleans. I did artist relations for a small company there, and after a year I made yet another move with the help of my aunt – Los Angeles. Again, I didn’t have a job and I didn’t know a single soul. I just went.”

Not many have the same mindset as Christina when it comes to picking up and moving to a new place to chase their dreams, but having the courage to do so was no coincidence. After losing her mom to cancer when she was a junior in college, Christina faced a great deal of pain.

“My junior year was the hardest year of my life. The guy I was dating broke up with me two weeks after my mom had passed away. He and I were going back and forth because we were in a really bad place. My family started falling apart a little bit, and I ended up getting really sick. My mental health began deteriorating and I developed an eating disorder. It just wasn’t good. It took me like two years to get through it.

A while later I was at an Adventure Club show when I realized that I could change things. I was in New Orleans, and it just hit me— ‘I need to stop feeling so down on myself.’ In my head it was like why do bad things happen to good people? I was trying to do the right thing and then I just realized that I was really doing it to myself. It was all a mental game. That was when I decided I was going to turn into a “yes, man” type of person. People are going to ask me to go to a show or festival, and if I have the time/money I’m just going to do it. I instantaneously became so much happier. For Ultra 2013 I was down in Miami visiting my aunt because I just had to get out of school for a little bit and then I realized it was the same week as Ultra. I literally bought a ticket off of Craigslist hours before the festival. There were a couple people I knew from NOLA that were going to be there so I called them up and I was like ‘hey I just got a ticket, can I hang out with you and your friends?’ From then on everything was just so much better.”

Once she had gotten herself back on the right path, things really started to look up for Christina. After moving out to Los Angeles and spending some time writing for a music blog and working to save some money, Christina sent her resume to Steven Pahel who worked at Buygore. Soon enough, Steven had extended the opportunity for her to work as a publicist and artist liaison starting with the Buygore Pool Party during Miami Music Week 2014.

“I hadn’t really done anything on this big of a scale before, but I was like okay I have to do this. I think after that event— it ran from 12PM-10PM and I was just running back and forth as the main point of contact for all the artists—since it was such a total success, I was like oh fuck yes this is what I want to do. This fast paced lifestyle and being surrounded by all of these creative people really sold me. When I was at the Dim Mak pool party, Borgore was playing and I finally got to meet him. He had just finished his set and I walked up and basically said ‘hey thank you so much for this opportunity. This is literally my dream and I am so beyond excited. I really can’t express how grateful I am.’ He was like ‘Promise me one thing. Promise me you’ll kill it.’ I was immediately like okay that’s it…I’m going to work my butt off. I’m going to do everything I can to make us all successful.”

Christina extended herself even further in the dance music industry with help from one of her first friends in Los Angeles, Liz Garard, as they co-founded Nap Girls Int’l, an organization set out to connect and empower women in the industry. What started out as a “napping pose” in response to the “prayer hands” and other various photo poses there are in the industry, Nap Girls grew into a support system for women that had not been available in the past.

When it comes to the way Christina Boemio has been able to keep herself going and pushing for success, here is the advice she left us with:

“My best advice is to literally go after what you want. So many people questioned why and how I just picked up and moved. I told them that sometimes that’s just what you have to do. To me, the worst that could happen was it didn’t work out and I would just move back home. Another huge thing that helped me was what a bartender actually told me two years ago. ‘Every person you don’t speak to is a missed opportunity.’ You don’t know anyone’s background, you don’t know who they know, where they’re going, etc. So try to speak to everyone. I’m a huge advocate for being respectful, kind, and having good manners. Saying simple things like please and thank you will take you so far; it’s surprising. Just be nice. And then aside from networking, you have to build relationships. Don’t just have somebody as another contact in your phone. Invest time and energy into them, get to know their story.”