Kaskade Makes History In Los Angeles With Performance At LACC

UPDATE 7:30PM | While Kaskade’s team has still not directly contacted us, Mike Burakoff, director for Kaskade’s live show and visuals, was able to shed some additional light on the situation. The image seen below is not indicative of a prerecorded set. In actuality, it is “times in a practice mp3 that Ryan mixed so we could get our heads around the massive 2.5 hour set. Ryan does it all old school.” The times listed are to aid in safety from pyro technicians and timing for lighting engineers.

“We had a LOT of fireworks going off inside and we needed to time these out so no one gets hurt. I grew up as a musician and appreciate that even though Ryan has an idea of where he is going, still improvises all the time based on the crowds reaction.”

Pre-recorded sets are still a no-no in the dance music world, and that’s not at all what Kaskade has done here. Then again, a little planning beforehand is always a good idea.

Kaskade’s Saturday show at the Los Angeles Convention Center set a few records. First, it’s reportedly the largest event ever held at the venue; second, it is reportedly Kaskade’s biggest ever solo show, claiming 21,000+ attendees. The show at LACC was one of three that weekend, the first a Redux show at The Palladium the night before, the last being an afterparty at Exchange LA. And while the show will go down in history in the minds of many, there are also a group concerned with the authenticity of Ryan’s set.

With an event of that scope, you can’t have anything going wrong. Nothing. That’s why pre-planned sets, though maligned, are at least understood at such a large scale. 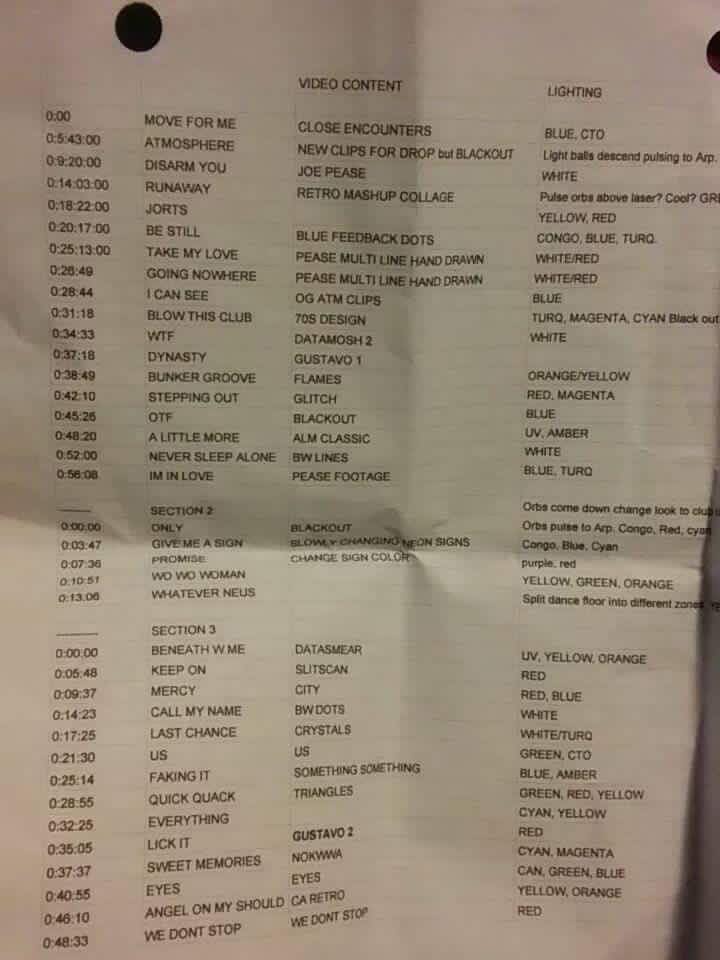 A set list in music is not all that uncommon. What are more uncommon are discrete time stamps for each track and when they will be played. One YouTuber, “God Hands,” was able to record most of the LACC set and from examination of the video and set list, it seems like most of it matches up pretty well.

The question becomes whether or not Kaskade’s set was indeed pre-recorded, and whether that matters.

Assuming that people bought a ticket to see Kaskade perform at LACC, rather than Exchange or Palladium, their main interest was probably the size of the show, which would come with intense lighting and visuals. Sure, Kaskade is expected to perform – but you’re not at the LACC show to see him spin vinyl or create double drops – you’re there for the spectacle.

Then you have an artist like Zedd, who has said in an interview before that he has a lot of things going on behind the lighting booth for his True Colors tour, constantly in contact with his VJs to make sure they’re always ready if he throws anything different into the mix. His approach was about improvisation and preparation.

Let’s get one thing straight: Kaskade is a legend, and even if his LACC set was prerecorded, which there is no concrete evidence for, he still had his Redux and afterparty sets to really let loose. The main point of this discussion is just that: to breed discussion. Is a prerecorded set okay in some contexts where large-scale lighting is essential to a show, or is it just flat-out never okay?

We’ve reached out to Kaskade’s team for comment, but have yet to hear back at time of publishing.