It’s that time of year again; summer is fast approaching and festival season is well underway. While many turn their eye towards massive events like Coachella and HARD Summer, we can’t help but fixate on the gems of the underground circuit. First on our list, the one we’re counting down the days for with baited breath, is Humboldt’s own Northern Nights Music Festival. Now in it’s fourth consecutive year, this gathering is always chock full of wonderful people and supremely good vibes; not to mention this year’s lineup, which is absolutely stacked with talent from both the States and the world beyond. Variety is the name of the game here, with performances from GRiZ, Troyboi, Lafa Taylor, Bass Physics, ONHELL, and many, many more. And, putting aside the music for a moment, there will also be a variety of workshops, live shows, and visionary art showcased throughout the weekend.

We seriously cannot wait to be nestled in the redwoods with our festy-family once again. As you may have guessed, tickets are flying off the virtual shelves; grab yours while you can, Northern Nights is not to be missed! The full lineup can be found after the jump, as well as an exclusive interview with Slumberjack; we’re especially excited to catch their set and were lucky enough to pick their brains for a bit. Happy reading! 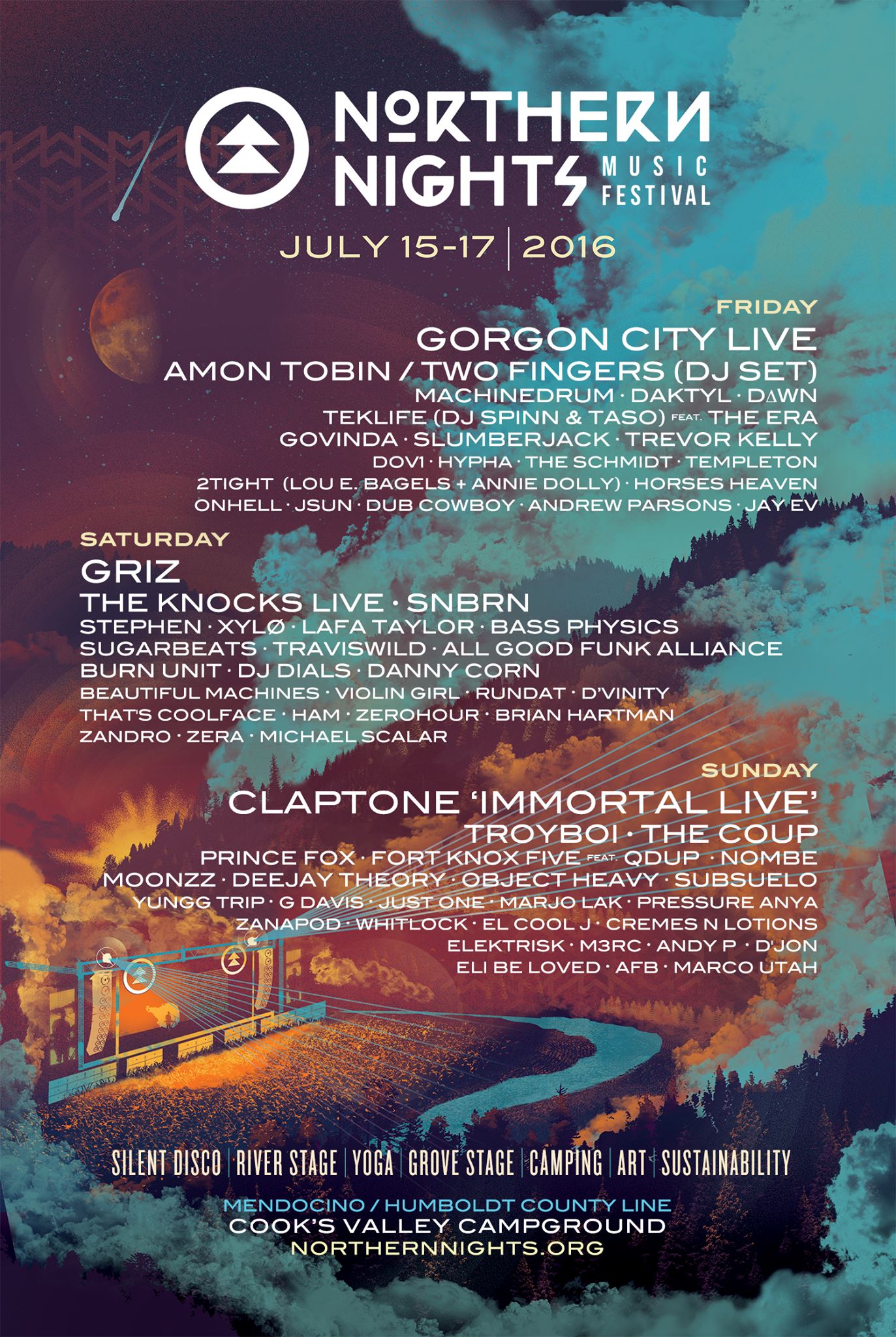 Slumberjack is the collaborative project of Morgan Then, a classically-trained pianist and former world-music artist, and Fletcher Ehlers, a native Australian whose production skills are completely self-taught. Based in Perth, this Australian duo has been taking the electronic scene by storm with their iconoclastic approach to dance music. Flawlessly meshing elements of trap, future-bass, and pop, Slumberjack utilizes their juxtaposition as producers to break boundaries and push into exhilaratingly fresh arenas of sound. From touring with Alison Wonderland to remixing Porter Robinson, it’s safe to say these two are on a meteoric rise. Read on to learn a little more about who they are, where they came from, and where they’re going.

Tell us a little about your background; what is the origin story of Slumberjack?

M: I met Fletcher about four years ago at Stereosonic in Perth, Australia.  We were backstage and sort of shook hands and introduced ourselves.  Nothing really came about until a couple months later when I suggested we should jump in the studio when I found out he dabbled in making music.  The start was mostly experimenting with sounds and styles that we both liked and luckily both our tastes converged to what they are today.

What was the first piece of electronic music you ever heard? Did you love it or hate it?

F: I was exposed to electronic music when I was pretty young as my parents were into house music. I thought it was super lame and wished they listened to “songs with words” like all the other parents – little did I know that it was actually super dope and would lead to me discovering the Ministry of Sound compilations which started my love of electronic music.

M: I did have my reservations as I came from a very strict classical background.  I am guilty of having the belief that one should be able to write, play and perform at the same time to be considered a musician.  I’ve changed my views since and there is truly an artform using a bunch of 1’s and 0’s to create an emotive experience.  That in itself is a challenge, just like mastering any instrument.

What made you choose ‘Slumberjack’ as your alias?

M: We didn’t give it much thought.  Fletcher thought it was just a cool name, and I agreed.  A few people have tried to dig deeper about this, but it’s the honest truth.

Since one of you is classically trained and the other is self-taught, was collaborating difficult at first? Or was it natural right from the start?

F: Naturally there were a few small road bumps at the start as we both had different ideas of what a dance track should be. Morgan would approach everything from a music theory standpoint and would want to focus on choosing the right key and chord voicings whereas I wanted to dive into the more technical stuff like sound design. That was a long time ago though and we’ve both learned a lot more about each other’s style of production since then.

How does the electronic music scene in Australia differ from the scene here in the States/North America?

M: I think both are pretty similar.  The difference is just the size.  Which is not to say Australia’s smaller community is unfavorable; it is actually quite the opposite.  We find that it is a very good platform/place to discover and nurture new talent.  I guess there is just less saturation so it is easier to be heard.  That said, saturation could be a good thing as well because we believe the pressure creates new styles and that is important for the growth and longevity of the dance community.

When it comes to live performances, how does playing at a festival compare to a club set? Do you have a preference?

F: You can’t really enjoy and appreciate one without the other. Club shows are sweaty, intimate and really fast paced which makes for a lot of fun but festivals come with bigger crowds and we usually have more space and freedom to do interesting things with production. And that’s not to say festivals can’t be intimate either; I remember the Sierra Tent at Snowglobe festival felt super intimate.

What is the wildest thing you’ve experienced while on tour or playing out?

M: This will probably sound really boring to you guys haha.  Fletch and I try our best to keep a fairly regular routine when we don’t have to “be in the zone”.  We just can’t keep up with partying/doing crazy stuff all day every day while touring.  It takes a toll on you and you end up losing focus and perhaps get sick or whatever.  If we have to pick one though, we had a swim (we were protected by a sheet of perspex) with a huge crocodile in Darwin last year.

Who are your dream collaborators?

F: Timbaland and Hans Zimmer would have to take the top two spots.

What have been the highest and lowest points of your career thus far?

Traveling around the world doing what we love and meeting new people has got to take the cake.  Not getting to see your close friends and be home long enough is the trade-off.  To be fair, we really really enjoy what we do and there hardly is a low point from our perspective.  We always find ourselves busy and rarely take breaks.  But, when we do take a break, we administer the holiday to ourselves and that is a big win in itself.

F: We’re releasing our second EP which we’re very excited about and are following it up with some select tour dates; we’ll be hitting plenty of places in the US that we’ve never visited before.