Back in the early spring of 2015, I was a freshly hired writer at Your EDM and was just beginning to cover live events for the website. After attending several small club shows, festival season in the city of Chicago began with the highly acclaimed Spring Awakening, a three-day romp through some of the biggest names in the genre. It was my very first time covering an event of this size, and I remember the feeling well. It became one of the most memorable weekends of my life and one that both prepared me for the future of my work and set the standard for the rest of my time exploring Chicago’s music scene.

This is why the festival’s return to the city last weekend was such an exciting moment for me. Stepping back through the pink gates and seeing the iconic shape of the main DJ Stage were instantly reflective experiences, as I was able to think back on where I was in different areas of my life and career just a year earlier when seeing the same sights. The result was a fantastic weekend of great music and amazing Chicago crowds, albeit one that tested my ability to stave off exhaustion due to the unbelievable temperatures and humidity.

The first day began with near dehydration upon entering the festival grounds, which isn’t as awesome as it sounds. The shock from stepping out of a cool car into sticky, 94-degree sunlight without having had much water in the morning was a shock to my system. Regardless, I quickly filled up two water bottles and enjoyed my very first set of the weekend without missing out on any of the action. Troyboi had long been a favorite of mine, and seeing him groove and throw down some of the wonkiest and grimy tracks of the weekend was a special treat. After wandering around the grounds to catch 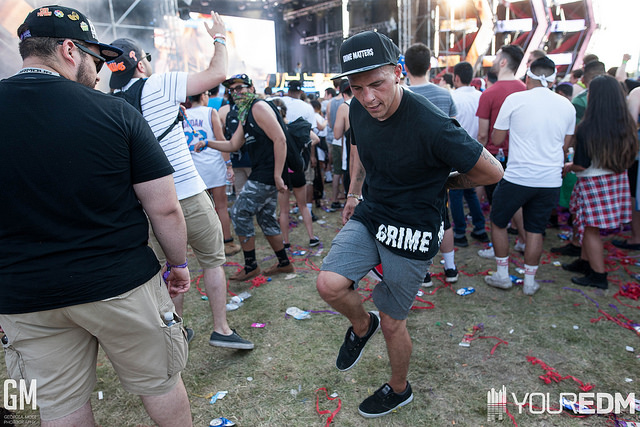 After wandering around the grounds to catch a few minutes of the Trap House and Tritonal, I settled in for a raging, bass-saturated set from Bear Grillz. I couldn’t believe that he was able to perform the entire show inside the bear costume as I sweated and panted with just a t-shirt on, but he managed to somehow fight the heat and throw down an incredible hour filled with dubstep, oldies and everything in between.

During the remainder of the afternoon, I watched Gramatik, Borgore, Alison Wonderland and Flux Pavilion represent some of the most creative and highest energy sectors of the spectrum. The larger of the two tents, which was taken over throughout the weekend by different brands and industry entities, could usually be found overflowing into the grass behind it with fans’ hands raised and shoulders packed in tight. Meanwhile, on the two main stages, enough room to stand and dance could be found almost anywhere. This was the case even when the headliners like Dillon Francis  and Deadmau5 began their performances during sunset. After hearing pounds of unreleased music and experiencing a vibe unlike any other, my first evening ended with exhaustion and happiness. 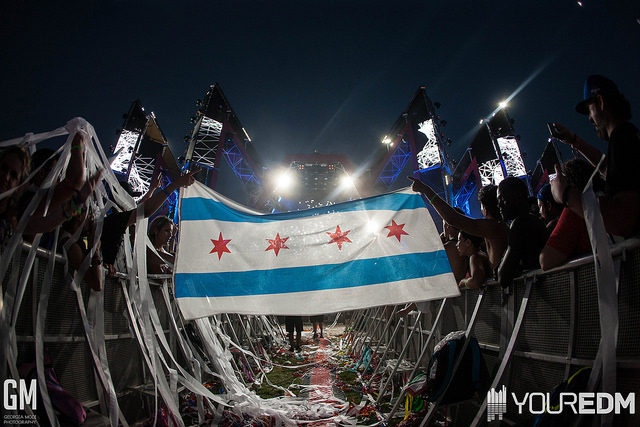 I arrived at Addams/Medill Park rather late on Saturday, but was still able to catch the majority of Flying Lotus‘s set and accompanying theories about artificial intelligence and the future of Google. While Carnage drew a staggeringly large crowd to the DJ Stage with his ever-popular fusion of hardstyle, festival trap and pop classics, I made my way to the Electronic Stage to prepare myself for duo Zeds Dead‘s closing set.

Having witnessed their live performances both at SAMF 2015 and other places in the past, I knew that I would be in for an expertly crafted display of everything dark and dirty in the bass music circuit. I had no idea, however, that their set would end up being my standout favorite of the entire weekend. From old school Zeds Dead to electronic and rock music classics to some of the most explosive and powerful tracks from the current era, each transition and turn were met with thunderous cheers and an ever-expanding crowd. They even debuted unreleased with collaborations with Diplo and NGHTMRE, making the evening that much sweeter for all of us in attendance. 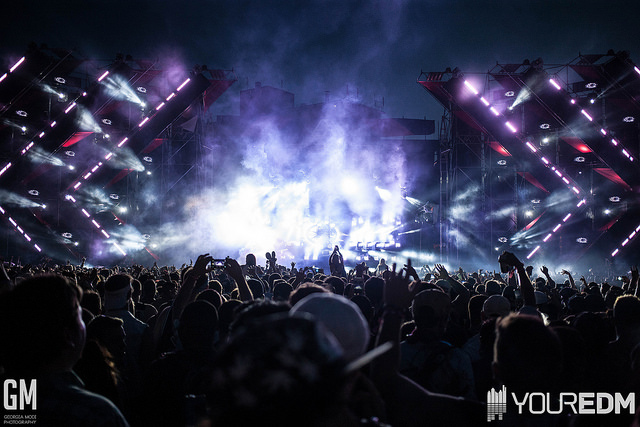 Security appeared to have been ramped up on Sunday after the tragic events in Orlando Saturday evening, and for very good reason. I was checked with a metal detector before entry, and the overall turnout was visibly lower. I arrived on the grounds just as The Chainsmokers were finishing their evening performance, and needless to say, it was absolutely stuffed with people. As the sun began to set on the final round of sets, I loyally made my way back to the Electronic Stage to catch dad himself, RL Grime, close out the festivities.

Even though his tendency to play material other than larger than life trap beats is growing more and more tiresome for me, I had a fantastic time grooving out to some of my old and new favorites. I left the park with a free Vita Coco coconut water in my hand and a feeling of deep satisfaction in my soul. Another great year, Spring Awakening.

Check below for the complete album of photos taken by our resident photographer Georgia Modi, and click here to tag yourselves and your friends!

Napster Is Coming Back.