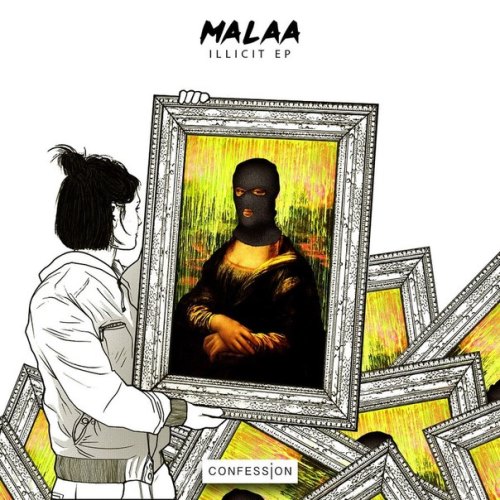 MALAA burst into the scene out of nowhere last year and has managed to rise above the constant speculation over the mysterious man’s identity and establish himself at the forefront of the g-house scene. Interestingly enough, the producer has demonstrated a knack for self-awareness by utilizing the “robbing a bank” theme triggered by a MALAA meme to full effect.

Right from the get-go MALAA lets us know that he’s not going to be messing around for the next fifteen minutes in his brand new Illicit EP with “Illicit Intro” which is as filthy as it is ‘illicit’. All in all, I counted one bank robbery reference, two requests to ‘put on your ski mask’, three references to ‘real house music’, and 94 total seconds of pure, unbridled gangster house music.

MALAA fans will no doubt be familiar with the lead single of the EP, “Diamonds,” which was released on Tchami’s CONFESSIONS label last month. The track is quintessential MALAA at his (or their) best. Dark and weird, the single makes great use of a one-line hip-hop vocal sample which is chopped and screwed throughout to maximum effect.

Like we’ve come to expect from MALAA tracks, “Frequency 75” is primarily anchored by a gritty hip-hop vocal sample which paves the way for wonky percussion kicks and bass kicks amidst a bouncier than usual MALAA bass line.

Rounding out the fifteen minutes of gangster-house music we’ve got “Danger.” MALAA undoubtedly saves the best for last in this EP with “Danger” perhaps the weirdest of them all. Not only does the track boast MALAA’s wobbliest drop to date, there’s an awesome 30 second in the bridge of the song which will really have you confused about where “Danger” is heading next before MALAA closes it off with some typical g-house swagger.

Stream the EP via Spotify below or pick it up on iTunes here.